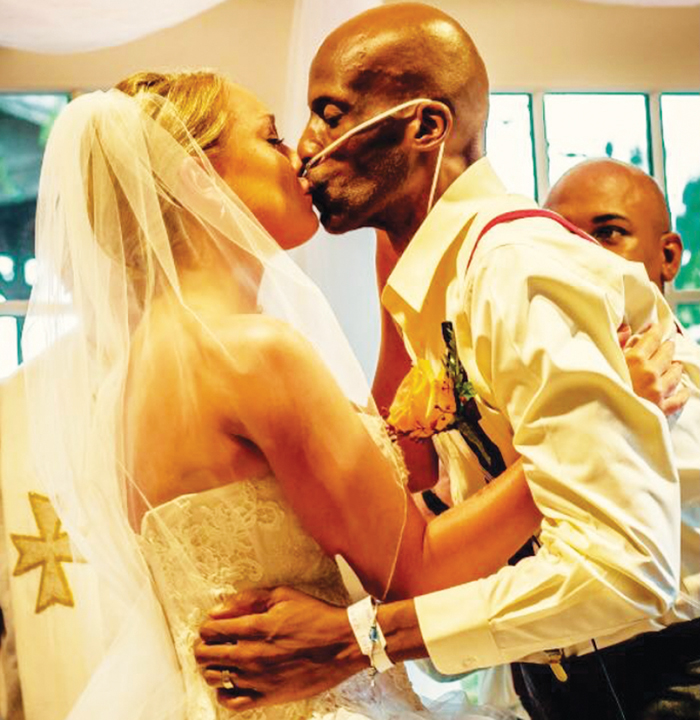 Monika Uhlig and Marc Mitchell were married at the Kate B. Reynolds Hospice Home on Aug. 16. He died the following day of cancer.

“I never really loved school” smiles Monika. “In fact, when I was at West Forsyth, I was able to show Principal Telford the merits of equine barn management for academic credit.” After her high school graduation, she showed and rode horses, traveling up and down the east coast until she was 21 years old. “I was very independent and started paying all of my bills right after I graduated,” notes Monika.

She decided to add bartending to her resume to make extra money and meet new people. It was this choice that would lead her to meeting her future husband, Marc Mitchell. According to Monika, Marc was a tall and fit guy that had a zest for life and loyalty to his friends and family that was quite charming. He helped manage security for various noteworthy figures and for the bar Monika worked at in Greensboro. He had also played basketball professionally in Mexico and wrestled. Initially, Monika and Marc were just friends. However, Monika was at a crossroads in her life and Marc stepped into to offer encouragement. “He told me I was too good for what was going on in my life. He got me into the gym for some grueling workouts. He was tough on me, too. He wouldn’t let me make any excuses. Then we started cooking really healthy dinners together. We spent a lot of time outdoors enjoying nature, whether we were at the dog park or going on hikes. Before long, I realized I had fallen in love with my best friend,” recalls Monika.

Monika and Marc were inseparable. He shared her passion for riding horses and being around animals, although he never rode one himself. He spent hours at the barn with her. She joked, “We never had a horse big enough for him to ride.” As their courtship flourished, Marc asked for Monika’s hand in marriage. He spoke to her dad, Karl Uhlig, who agreed. Marc proposed on Monika’s birthday and was given an excited ‘Yes.’ Monika went into full-wedding-planning mode for the next few months. She was excited about planning all of the details for the ceremony that would set the stage for the rest of their lives together.

Fate would put Marc and Monika on a different trajectory. Within half a year of their exciting news, Marc was given a terminal diagnosis of stage 4 liver cancer. He was given 3-6 months to live. Not one to take this news without a fight, Marc told Monika, “I want to do whatever it takes to beat this. I’ve got you.” Monika reached out to her friends and community to help find the most reputable doctors to fight this insidious disease that was manifesting inside Marc’s body. Marc also had grown closer to a friend, Chuck Nifong. He had beaten a very progressive form of cancer himself, and that helped provide some inspiration to Marc and to Monika. Chuck would provide comfort to Marc by going out to the barn and just sitting together with the horses and other animals. Chuck was there for him at any hour of the day to read scripture and provide a sounding board.

“We met a lot of amazing people during this time. We learned in 11 weeks about Marc and his friends, what could have taken a year, or a lifetime,” remarks Monika’s mother, Rochelle Uhlig. “Marc’s friends are wonderful people. They were always bringing us food and wanting to help however possible.” In fact, it was Marc and Monika’s network of friends that made it possible for her to take off of work for 2 months to care for him around the clock. “The week after Marc got the diagnosis, a gofundme.com account was established on the internet to help with the medical bills, our daily expenses and bills, and things needed to make Marc more comfortable,” reflects Monika. “The first fundraising event raised over $10,000. There were several other events put on by the Greensboro nightlife and the bodybuilding/gym community that were tremendous. Over 1,200 people donated and attended events to support Marc and I. It gave us something to look forward to each time. Vendors donated items to be raffled off that brought in substantial amounts. We even had a friend donate his older BMW that he had inherited from his grandmother who had just passed away from cancer. Marc loved smash car events, and people paid to participate in taking a sledgehammer to the car. In total, three cars were donated to do so.”

“Marc was able to attend the first fundraiser. However, the other ones he was not able to physically participate in because of his declining health. People recorded it though so he was able to watch it from home. In his absence, I went and spoke to all of his friends, many of whom he hadn’t seen in 10 years and thanked them for the support and encouragement. It meant so much to both of us,” Monika reveals.

Monika and Marc also appreciated the support they received from friends who knew all too well what it was like to have cancer. Monique Sparks was a good friend that was also fighting brain cancer. “Many tough nights we would call Monique to come over and just sit with him. She would pray and read scripture and even rub his feet to try and make him more comfortable,” Monika remembers. “Monique created MarcStrong bracelets which proceeds went towards helping alleviate our financial costs during this time. At the first event, over 100 orders were placed for them. They were comprised of different beads — for instance black onyx, which is the stone of power. You could customize the stones that you wanted on your bracelet. Marc and I had matching bracelets with every stone on there,” Monika mentions. Monique has maintained the facebook site to allow people to still purchase these bracelets at www.facebook.com/marcstrongbracelets. Others noticed and appreciated Monique’s kind gesture. Subsequently, her business has flourished with the help of those who respected her kind deed in the community. Friends and family would post pictures on facebook wearing their bracelets with words of encouragement. Monika and Marc were touched by each picture and comment posted on Marc’s page.

Marc’s oncologist recommended a treatment that Marc referred to as “the bionic box.” He had joked that it would make him a bionic man. Having taken the traditional treatment approach, and still finding no signs that the tumors were shrinking, they turned to “Dr. Frankenstein,” a Swiss doctor that the Mitchells and Uhligs had gotten to know from their doctor here in Winston-Salem. The box emitted low frequency electromagnetic waves to attack the cancer cells specifically, and leave the healthy cells intact. Unfortunately, Marc’s health would not allow him to travel to Switzerland to pick up “the box” which he needed immediately. Because it was not yet approved, and still in the trial phase since 2008, someone had to go over and pick it up. It didn’t take long for Monika’s younger brother, Max, an engineering student at North Carolina State University to volunteer his assistance. “It was a little surreal. We were told to go to this train station, then to the doctor’s office, and it would be waiting for us,” kids Rochelle. Marc was the first candidate in the United States to actually utilize it.

Max made a very quick trip to Switzerland, thanks to the generous donations from the charity events. As soon as he was back stateside, he met Marc and Monika at the Piedmont Triad International Airport in Greensboro. Everyone was elated to see that “the device” was actually shrinking the tumors. However, at that point, the cancer had overtaken his lungs making it very difficult for him to breath. “Marc never talked about dying. He always acted like he could beat it,” reflects Monika.

Monika and Marc decided that cancer would not stop them from getting married. However, instead of the elaborate wedding that they had been planning months prior, they decided to have a small intimate ceremony at the Kate B. Reynolds Hospice Home in Winston-Salem. “It was very touching how quickly people helped us pull it together. Vendors that we had planned on working with moved their schedules around to accommodate us,” says an appreciative Monika. Monika’s brother, Max and best man, Billy McGill, proudly stood next to Marc and Monika with her matron of honor, Ally Earnhardt, and bridesmaid, Jen Schanz, as they were married on August 16, 2015. Marc’s oncologist attended the ceremony because of the bond that they had formed. “One of our neighbors told me something that struck a chord in me,” says Rochelle with great sentiment. “Monika was living out her vows to Marc even before she said them. And she really did.” Monika reflects on this sentiment, “Marc took care of me in the beginning of our relationship. And I took care of him in the end. Marc always looked after his friends and people in the community, never expecting to need help in return, although, those people came through to take care of him when he needed them most.” Marc passed away the day after their wedding on August 17, 2015.

“They had recorded their wedding which was beautiful,” says Karl. “However, I wish we had recorded his funeral. It was an amazing celebration of his life with over 500 people in attendance. The Greensboro police were there in their uniforms, and they had such a presence as they paid their respects. People were singing. People were yelling out in a good way. It was the most touching tribute I have ever witnessed.” Monika acknowledges, “Your whole perspective on life changes.” Marc left behind many loved ones, including family and friends. As Monika takes each day at a time, she still sees Marc’s 3 year-old son, Cam Mitchell. She relishes in continuing to spend quality time with him. As Leo Tolstoy remarked, “Only people who are capable of loving strongly can also suffer great sorrow, but this same necessity of loving serves to counteract their grief and heals them.” Monika continues to honor Marc’s memory with her desire to help others who have been given this painful path to walk.