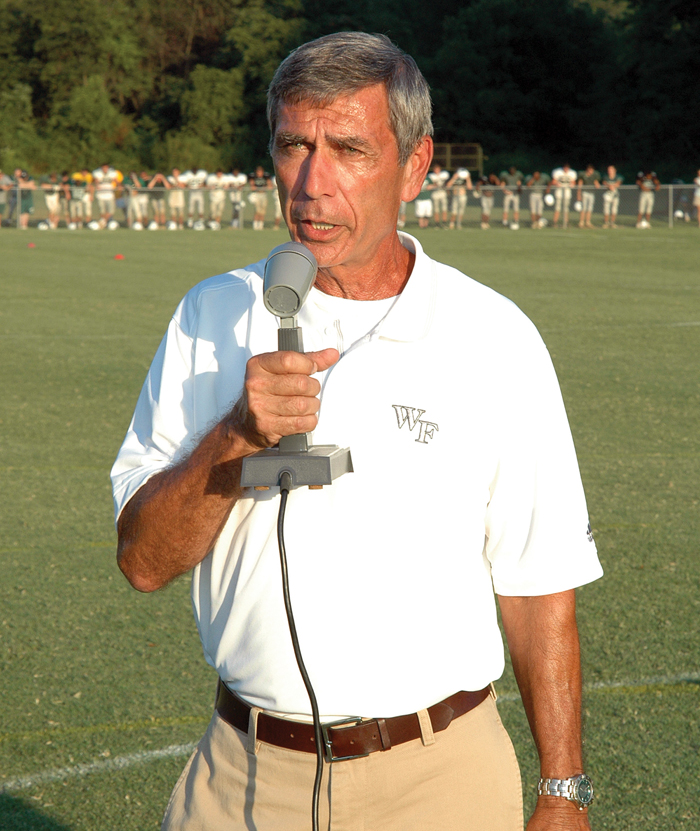 In his 37-year teaching career, Durwood Pack missed only one day of school.

Durwood Pack married his wife, Jane, on April Fool’s Day. Soon after, he and Jane had twin boys. The twins were unexpected. At the hospital, the twins were called, Baby A and Baby B. The new parents thought it would be fitting to name the first twin with a name starting with A and the middle name starting with B. The second twin’s first name began with a B and his middle name began with an A. So the twins are named Austin Blake and Barrett Alden.

The story of his boys’ birth and the date of Durwood’s wedding day is fitting to Mr. Pack’s humor. His wit is as consistent as Yogi Berra’s yogisms. So the fact that Durwood became the longest serving Athletic Director (A.D.) at West Forsyth High School while he claims he had no athletic skills is funny but fitting. “In high school, I was about 5’7” and weighed 130 pounds soaking wet. I was too little for basketball and football. I played baseball and they put me in right field because no one hit the ball there,” says Durwood.

Before coaching sports, Durwood’s career actually began at Kennedy High School teaching history. At that time, Kennedy only consisted of 9th and 10th graders. The students typically graduated onto West, which schooled 11th and 12th graders. At Kennedy, Durwood coached cross country, wrestling, and baseball. Once West Forsyth High School decided to incorporate all four grades, freshman through seniors, Durwood naturally moved there. At West, Norma Harbin was the athletic director during Durwood’s first year. Norma was the first woman A.D. in the state. She asked Durwood to coach soccer. Durwood told Norma he didn’t even know how many kids were out on a soccer field at once. So Norma told Durwood he could have an assistant coach. Durwood recalls. “I only knew one play. It was a basketball play. So we used the basketball play on the soccer field.”

Once Norma decided to become assistant principal, someone advised Durwood to apply for A.D. “You cannot be an A.D. without a supportive wife. I used to go to work at 7:30 a.m. and wouldn’t get home until midnight on Friday night.” In the beginning, Durwood says, “The only sports we played under lights when I first became A.D. was football. We put lights on baseball, softball, and soccer.” Speaking of soccer, Durwood may not have known a lot about the sport at first glance, but he sure became one of the sports biggest supporters.

“Every other school was playing their games on the football field. I thought it was the right thing for the soccer team to have their own field because the football field was so dry. And, it gave West the chance to be the only high school to have a soccer field separate from the football field.” Durwood helped Principal Peoples get the soccer field. He also made sure it had an irrigation system so that the field would be in mint condition. Durwood also mowed the field. “I love to mow. No one can reach me unless they walk down to the field,” Mr. Pack grins. “I measured it off to see how many miles I mowed on that field. I mowed from here to Raleigh and back to Greensboro on a John Deere.”

It comes as no surprise that the soccer field is now named in Durwood’s honor. (The John Deere mower has since retired.) Durwood’s commitment to West’s athletics does not stop there. He also fought for women’s sports. He oversaw the construction of the softball complex. He also made sure the girls got new uniforms when the boys did. However, Durwood says, “I got in trouble one time.” The girls volleyball team hiked up to Tuscola High School six years in a row to play at their place. The football team always got a meal at K&W, so Durwood thought it was fair for the volleyball team to get a meal on the athletic department’s dime. “Jerry was out of town and so I couldn’t run it by him first. When he came back, he had a stack of checks to sign from all the athletics. He came back to me and said, ‘What’s the $75 for volleyball for?’ I said, ‘I will tell you what,’ and I wrote him out a check.’” Jerry laughed and told Durwood to just verify with him in the future.

And then there was another time Durwood got into a misunderstanding. A salesman trying to sell detergent for the athlete’s uniforms was trying to convince Durwood to buy one of the package deals. Durwood told the salesman he had to wait for Jerry to get back. “The guy tells me that I should just get a starter kit for three-ninety-five. I told him I could pay for that out of my pocket. He later sent me a bill for three-hundred-ninety-five.” During the thirty-seven years of teaching and coaching, Durwood only missed one day. Under Durwood’s twenty-two year tenure as A.D., West athletics won 107 Conference Championships, two state championships, was state runner-up four times, and seven Wachovia Cups. Durwood was the Central Piedmont Conference President for three years and also helped make sure scoreboards were on all athletic fields. In 2012, he was inducted into the Winston-Salem/Forsyth County High School Sports Hall Of Fame. Durwood may have had some farcical moments as A.D. at West, but our neighbor has certainly left his athletic footprint on Titan athletics for years to come.