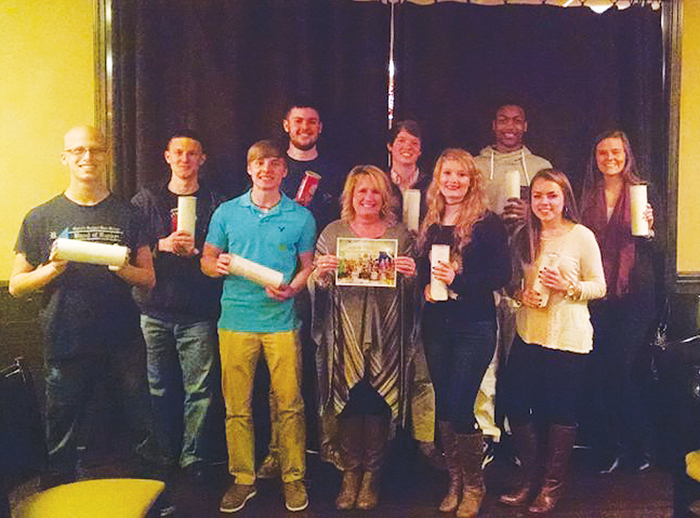 On January 2, 2006, Marie Daniel’s 2nd grade class at Clemmons Elementary put together individual time capsules. They wrapped empty Pringles cans and wrote their name and address on the outside before stuffing them full of all kinds of memorabilia.

They agreed to open them in 10 years since they would be graduating from high school.

When Mrs. Daniel learned that one of her former students would be graduating in December, she decided to go ahead and get the kids together a little early. So, on November 8th, they arrived at 2520 Restaurant to open their time capsules. There were kids from four high schools; many who hadn’t seen each other in years. It took a few minutes to warm up to each other but soon they were laughing and reminiscing. They took turns opening and reading what they had placed in their capsules 10 years before.

Each time capsule had a letter from Mrs. Daniel and a picture of their 2nd grade class. The students had been asked to write something kind about their fellow classmates and those notes had been gathered and placed in each time capsule by their teacher after they turned them in.

The things they wrote were very sweet and showed their camaraderie with their second grade classmates. They described their friends as kind, funny, my most best friend since 1st grade, nice sweet clothes, pretty hair, amazing friend, pretty eyes, very thoughtful, kind to everybody, my best friend, great smile, can play drums great, good table mates, good writer, nice friend, smart, great listener and an intelligent mind. Ten years after being 2nd grade classmates, these were all very special things to read about themselves.

What else was in the time capsules? A Boy’s Life booklet, a Bracz flyer, letters from parents, letters that the children wrote to themselves, cut-out handprints of their hands, a rock, a quarter, a Wake Forest vs Maryland ticket stub, pictures of family and friends, pictures of the Texan football team, cars and motorcycles, lollipops and small stuffed animals and a piece from a blankie. After opening their time capsules, the kids reminisced about what they remembered about 2nd grade.

Most of them didn’t remember making the time capsules but enjoyed opening them. They watched a slide show of some of the activities from their second grade year at Clemmons Elementary. There were pictures of the musical they had performed in, pictures of their Thanksgiving feast and field trip to the Elm’s Nursing Home, Cat in the Hat Day with Michelle Kennedy (from WXII), their student teacher, their New Year’s party and field day. Those pictures stirred other memories of things that had made a lasting impression from their 2nd grade experience. They read the book Flat Stanley and then drew their own version of Flat Stanley and mailed him to distant places.

One student had mailed Flat Stanley to the President and received a letter and pictures. It was a memento he has kept since 2006. They talked about the story Mrs. Daniel told the class where she said mean things to a banana. When she peeled the banana, it was brown and bruised. She had explained to them that that’s what happened when you say mean things to one another. It was a lesson long remembered about the effect words can have and how important it is to be kind to others. They also remembered the chicken eggs they had in incubators and remembered watching them hatch.

They had also gotten to watch as caterpillars turned into butterflies. They ended the evening talking about some of their plans for the future.