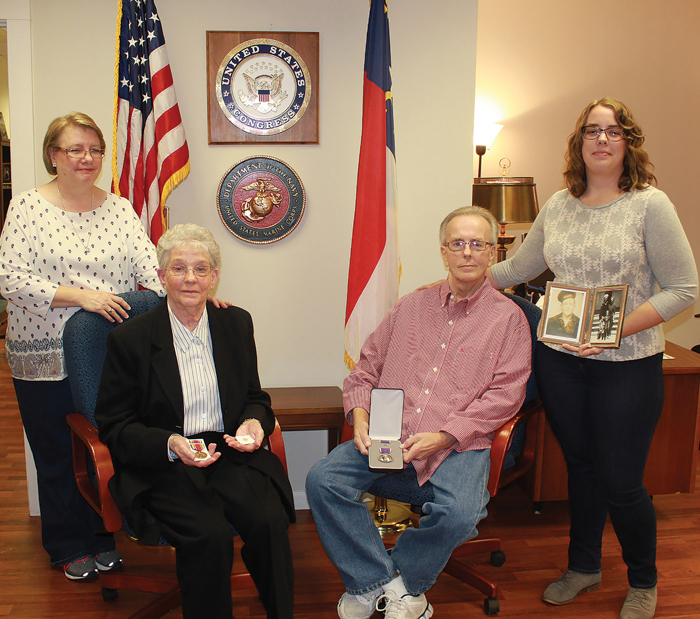 The family of World War II sailor Willis Tom Bradshaw who died on the USS Juneau in 1942.

While many of us were shopping for Christmas bargains on the weekend after Thanksgiving or feasting on turkey sandwiches at home, U.S. Rep. Virginia Foxx spent that Saturday afternoon presenting medals to a Navy sailor’s family. Willis Tom Bradshaw, who grew up in Gastonia, was killed in action Nov. 13, 1942 while aboard the light cruiser USS Juneau that was sunk during the Battle of Guadalcanal.

Bradshaw’s family now lives in Clemmons and had asked for Foxx’s help in getting his medals. Foxx does a lot of things, but she pays great attention to the presentation of service medals to veterans and their families.

Bradshaw’s daughter, Bonnie Ford, who was 7 when her father left for World War II, was presented with his World War II Victory Medal, Honorable Service Lapel Pin and a Purple Heart. The Juneau had a short and very eventful life. It sank with four battle stars to its credit. The ship was part of a massive building effort after Pearl Harbor. It was quickly thrown into battle against the Japanese navy.

The ship repeatedly shot down Japanese bombers as it sailed in defense of the vital American carriers.

During pitch black conditions at Guadalcanal, the American and Japanese ships found themselves intermingled. Juneau was seriously damaged and had to withdraw. Limping away, it was later hit by another torpedo and exploded, breaking in two. The ship sank in 20 seconds.

Two nearby ships assumed all were lost and abandoned the site. In fact, 100 sailors had survived and were left in the water. Eight days later when a they were spotted by a rescue aircraft, only 10 had survived the elements … and the feasting sharks. One of the most noted stories of the Juneau’s sinking was the deaths of the five Sullivan brothers, all serving on the same ship. They had enlisted with the stipulation that they all serve together.

From a Wikipedia story about the brothers: “The brothers’ parents learned of their deaths on January 12, 1943. That morning, the boys’ father, Thomas, was preparing for work when three men in uniform – a lieutenant commander, a doctor and a chief petty officer – approached his door. “I have some news for you about your boys,” the naval officer said. “Which one?” asked Thomas. “I’m sorry,” the officer replied. “All five.”

Three of the Sullivans died in the explosion. Two others died of exposure.

Willis Tom Bradshaw was among those 687 fatalities. The stories of heroism and hardship from World War II are countless. That Greatest Generation faced wars on both oceans and in Europe, Africa and Asia. Unlike today when the Navy is considered a safer assignment than the Army, ships were sunk with great regularity in World War II. The Japanese with kamikaze pilots and the Germans with U-boats were treacherous menaces at sea.

Blotter for the week of Dec. 2

Obituaries for the week of Dec. 2

Chad Lakey knew as a boy what career to…