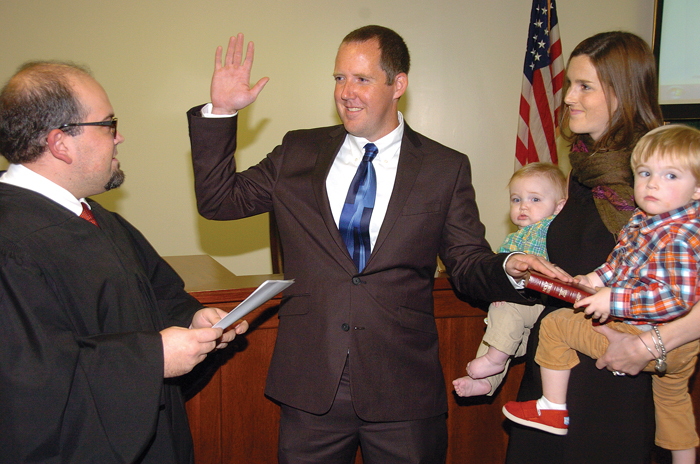 For the Clemmons Village Council, it was a night for the changing of the guard with three new members – Michael Combest, Larry Farmer and Chris Wrights – receiving the oath of office.

That meant the departure of three outgoing members … and one last chance for a contentious exchange regarding the open meetings law and whether the contract with Novant for the Village Road project had consensus one way or the other.

Bill Lawry and Norman Denny, who lost their bids for reelection, spent most of their remaining time up front voicing their concerns about those topics. Lawry made a motion to make changes to the agenda, seeking to add a budget amendment to approve funding for Mayor Nick Nelson to attend the Essentials of Municipal Government class, in addition to a discussion of the open meetings law, which was tabled two meetings ago and then not discussed again in the last meeting, which was cancelled due to a lack of a quorum. It was voted down 3-2 with Denny siding with Lawry in favor, and council members Mary Cameron, Darrell Roark and Mike Rogers opposed.

Lawry again detailed what he thought were clear instructions “for the deal to stop here” with Novant in the Oct. 13 meeting unless it agreed to pay any overages beyond its $1.9 portion for the road. Lawry said that was altered in the next meeting when attorney Warren Kasper changed course based on instructions he got from manager Larry Kirby and three council members. “If this issue goes further, I recommend that a review of this time line be undertaken and published with citations of the audio recordings of the relevant meetings,” Lawry said. More debate ensued when Denny said he agreed with Lawry’s comments and added again that travel expenses involving the N.C. League that had been taken out of the budget were later put back in.

Cameron denied there were any changes, and Kirby just verified the final budget amount. “The road deal is not the only thing that is getting slid back in,” Denny said. “Too much stuff is going on outside of meetings, and it’s time for it to stop.”