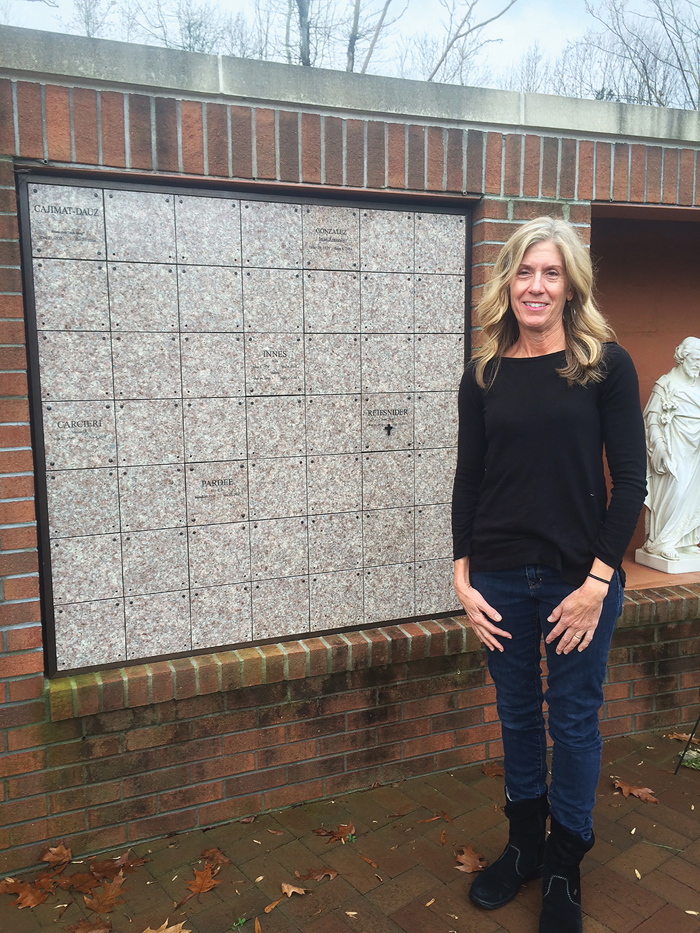 Laurie is pictured near the columbarium at Holy Family. Her family’s business provided these columbarium to the church.

Many have heard the saying, ‘The only thing constant in life is change.’ Change can be difficult, but for those of us who accept it, change can offer up dynamic occasions. Meeting Laurie Fitzgerald, one gets the sense of a person full of great energy and enthusiasm for life. She also carries around an open outlook which she seems ready to apply in just about any situation.

“Life is real fluid,” Laurie says with her smile that is as constant as the holiday cheer in December. “Situations change and you have to be open to adapting and changing yourself to see unlimited possibilities. Things you wouldn’t have even thought of. You just have to give it a try. My husband said to try tennis and once I finally gave it a try — I’m now addicted to it,” laughs Laurie. “Some things stick with you like tennis and some things don’t. Some things feel like serendipity. You have to explore those options — don’t just rule them out without investigating. Sometimes people say, ‘No,’ and they don’t even know what they are saying no to.”

Maybe it was the laid back atmosphere in New Orleans that helped shape Laurie’s fresh viewpoint on life. It was, after all, in Louisiana where she was raised. “We had a lot of good clean fun — a lot of boats and water skiing, and trips to the French Quarter.” Ms. Fitzgerald was always outside digging in the dirt. She was particularly interested in the items she found while digging and the history behind it all. “Where I lived, there were large shells from the sea that had been dug up and put on roads and in neighborhoods.”

Laurie was intrigued by the various patterns the seashells and rocks formed as a result of being mixed together for years and years. To those who know her, it was no surprise that Laurie became a geologist. She loved being able to work outside. However, Laurie would soon leave her life and career in New Orleans, after she and her husband decided to move to Oklahoma City. While in Oklahoma, they began to raise a family. After three short years, Laurie’s husband was presented with another career opportunity.

This time, it was in North Carolina. “We’ve lived here since 1989, except from 2010-2013. We were in Texas, but we came back once we had the opportunity to. My two sons grew up in North Carolina and were still living here. They are Wolfpack through and through. They’ve got North Carolina in their blood,” Laurie laughs. “Once my daughter said she wanted to go to school here, that’s all I needed to hear and we moved from Texas back to North Carolina,” says Laurie. “We love Clemmons. It is such a nice fit for us.”

It was in Texas, however, that Laurie began to work with her parents. Laurie’s parents own Everest Columbarium which provides columbarium to churches, cemeteries, and retirement communities. “They started it with my brother who is a designer in New York. My dad thought they could create a better product that was more lightweight.”

The company has taken off and now Laurie is a part of it. Her parents had a need for someone to manage their online inquiries. The company has columbarium in 40 of the 50 states and the customers only interact through orders placed online. So Laurie now heads that department while easily working from home, right here in Clemmons.

With an open attitude, our neighbor seems to have learned to master a positive outlook towards life. Laurie’s choices may remind one of a quote by Lindsey Vonn, the Olympian skier. “It’s amazing. Life changes very quickly, in a very positive way, if you let it.”