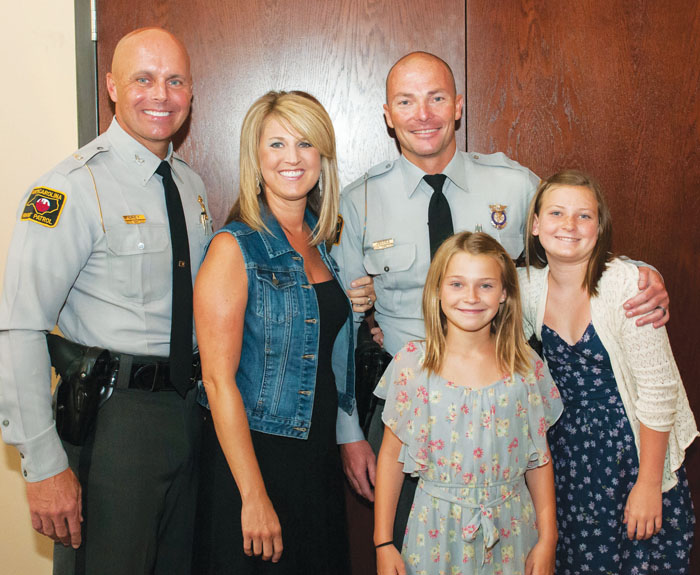 It was 2002. The highway patrolman was expecting an easy day for work. He was headed to court to report to the court of law about tickets and other information he had documented while out patrolling. Alex expected to be out of harms way, at least for today. However, on his way he spotted a female motorist in trouble on the side of the road.

He pulled over to help. “You are trained to always look at the car in front of you,” states Alex. “I called my shift partner. We usually talk and I would have told him I was taking a break before I went to court. He didn’t answer. He almost always answers.” Because his partner did not answer, Alex exited his car earlier than he might have done if he had been checking in with his partner. “The good Lord said look behind you,” Alex recalls.

There was a car coming at 80 miles per hour headed straight for the officer’s car.

Diving into the ditch between his car and the female’s car, Alex fought for safety. The speeding car struck Alex’s patrol car which then hit the stranded female motorist. The woman was severely injured but Alex only suffered injuries from his dive into the ditch. “My shift partner should have answered my call and I should have still been in my patrol car. I was trained to look at the car in front of me, not behind me — that’s the kind of thing that makes your hair raise on the back of your neck.”

Following the accident, Mr. Justice’s perspective changed. He had a young daughter at home and had a hard time thinking about what life would be like if his wife, Sonia, became a single mother. “For so many years, I had stopped cars and stood nearly inches from the highway, instead of standing on the passenger’s side of the car,” admits Alex.

“I couldn’t do that anymore and worked most of the county while staying off the interstate. It’s almost PTSD (Post Traumatic Stress Disorder), your blood pressure spikes and your heart rate starts just thinking about it.” As the oldest of the three brothers, Alex was the only son to follow in his father’s footsteps to go into law enforcement. He had to go through rigorous training to become a state trooper. For seven months in Raleigh, he woke up early with boot camp-like workouts and then hours of class work throughout the day.

Upon graduation, Alex began patrolling the interstate. However, once the accident occurred in 2002, he began to scale back the amount of time spent on the interstate and stayed within county limits. In 2005, Alex was not only promoted to Line Sergeant, but he also began to get involved with the Davie YMCA. He had been approached on numerous occasions to teach a boot camp type class. Mr. Justice finally accepted. “In law enforcement, you don’t get a lot of appreciation for what you do, but here, at the Y, it was a sense of accomplishment. I’ve had people tell me they’ve weaned off medication after coming to my classes.”

The First Sergeant is a certified body flow instructor. In fact, when WXII conducted their Transformation Nation, a weight loss program with Dr. Oz, it was Alex’s group who lost the most weight. What few know, is that Alex teaches classes twice a week that he gets paid for. Two other days he teaches the same class for free. During the summers, he can also be seen at the Oak Valley tennis courts teaching classes early in the morning for free. “It’s just a way to promote healthy living and give back to the community.”

Another way Alex promotes healthy living, is by riding his bike to Washington D.C. with six other officers in order to raise funds for caisson wagons, the horse drawn wagons that carry police officers to funeral services. “We ride 600 miles to D.C. for the national memorial service in May.” (If interested, you may donate to this cause at www.NCTAcaisson.org) Clearly, the First Sergeant seems like he is the perfect bill of health. However, in 2007, he had a cardiac episode. “I started sweating profusely thirty minutes after I worked out. I went to the doctor.

They checked my blood for triponin.” Tirponin levels elevate when a heart attack occurs. Alex was sent home but later that day, the doctor called back and told Alex his triponin levels had come back from the lab extremely high. He was rushed to the hospital. There, Alex was put on medication to reduce his blood pressure and high cholesterol. But here is what is strange about that — neither his blood pressure or cholesterol were high. Each were normal. “The doctor could not explain why it happened, so they put me on that medication anyway as a preventative.” Once on the medication, Alex began to have joint pain, even began to have plantars fasciitis. But he wanted to take the medication, because he had two kids at home, Peyton and Emerson.

Sure enough, though, in 2013, he had the exact same episode. Before, Alex was rushed to Novant for his first episode. This time he decided to go to Baptist Hospital, hoping to get a better explanation. “They couldn’t explain it either.” Alex, did however, ask for his medical records. He noticed each time he came in, the doctors gave a lot of magnesium to lower his triponin levels. So magnesium is what Mr. Justice began to take. “I self-diagnosed myself and stopped taking the blood pressure and cholesterol medication. I take 1200 milligrams of magnesium a day. I haven’t had an episode yet and I don’t have joint pains anymore.” In addition to his daily workouts, Mr. Justice is also a Unit Commander and does most of his work from a desk now, looking over investigations and assigning cases to counties throughout the state. So it is not a surprise he decided to conduct an investigation into his own health.

While Alex will not be quitting his day job investigating high profile cases and vehicle homicides, he also intends to start working in the physical fitness department with kids, not just adults. “My classes are for functional fitness. Most people think they are extreme, but we have people in their late 60’s and 70’s. So I strive to start working with kids and do athletic style training, too.” As First Sergeant Alex Justice continues to serve our community, one must consider our neighbor’s last name.

How fitting he has such a high concern for selfless acts, peace, and justice.