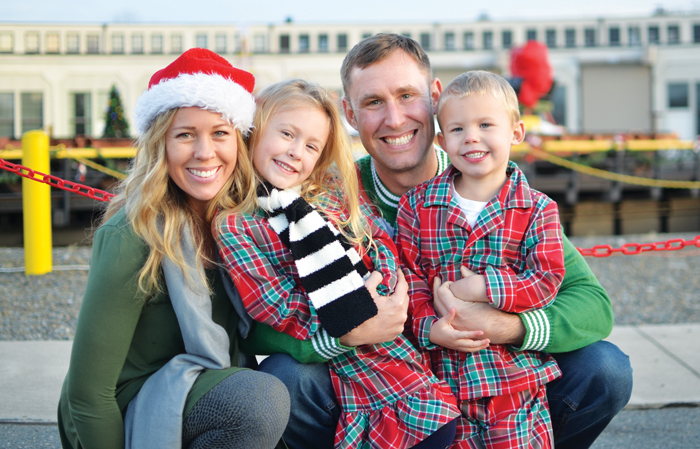 Heather Gladd with husband Clayton and children Avery and Colton. The young mother’s childhood in California was a struggle — a time that helps her appreciate today.

Heather Gladd lives the life, what many would believe, is the American dream. She and her husband, Clayton, have a beautiful daughter and son. They live in a lovely three-story home with a pool in the backyard.

But life, for Heather, has not always been so alluring.

Growing up in California, Heather remembers having bars on her windows. “We were extremely poor,” says Heather. “There was a crack house nearby. At one point, my mom was putting groceries on a credit card so we could eat,” Heather recalls. “I didn’t realize we were poor until I started to get invited to birthday parties. I saw what other kids had.” Heather’s mom, Deborah Cranston, decided she did not want this type of lifestyle for her children. During the day, Ms. Cranston was a teacher.

At night, she took classes to become a nurse. Once she became a nurse, she worked night shifts and saved money for a nicer house. “My parents put all their money into that house, so we had no furniture. My friends would come over and we would do gymnastics in my living room because we had no furniture the first year we lived there.”

Mrs. Gladd notes that all Californians plant sod. Once her family could finally afford the sod, it was Heather’s mom who did the weeding and Heather who did the mowing.

At 14, Heather worked at Hotdog on a Stick at the mall. Heather kept working with kids and decided she wanted to follow in her mother’s footsteps. She would become a teacher. During college, Heather met a boy, Clayton Gladd. She was very much in love and soon found herself following Clayton to the East Coast.

When Clayton got accepted to law school in Maryland, Heather went as well and found herself a teaching job. There, she taught low-income kids with unique challenges. “I was teaching children with special needs and 9th graders on 2nd grade reading levels.”

When Clayton got a job in North Carolina, Heather found a job that presented similar demands. “There were kids with learning disabilities that were so far behind they weren’t passing the standardized tests. In order to bridge the gap, the North Carolina school system created another 9th grade class for those kids falling behind. No one wanted to teach those classes because if the kids didn’t pass the tests, then your principal would get on you. But I didn’t mind because those were the ones I taught in Maryland.” Working alongside Heather, a speech pathologist helped with illiterate students. “After seeing what she did in and outside of class, I was blown away.”

Around the same time, Heather’s only other sibling, Jackie, had a son suffering from disabilities. “My nephew started doing occupational therapy, speech therapy, and physical therapy. I thought, ‘I want to teach speech therapy to kids.’” The deadline to get into East Carolina University’s speech program had passed. Therefore, Heather applied to the University of Alaska and was accepted. The time lapse was a strain though.

If there was a three-hour online night class starting at 5:30, Heather would begin at 8:30 Eastern Standard Time. This meant Heather was not done online until almost midnight. What was even more impressive about this grueling schedule, was that Heather had a six month old daughter, Avery. She was also working as a teacher. However, once her son, Colton, came along, Heather quit teaching to stay at home with her kids while also taking classes. But when she is asked how she is able to accomplish these tasks, she chuckles with an air that reflects her own surprise and answers, “God’s grace.”

Perhaps, there may have been some good old fashioned role modeling that was mixed in with Heather’s determination. Meanwhile, Heather and her husband moved into a luxurious house that was so foreign to her childhood memories of waking up daily without living room furniture. “I didn’t even want to live in this nice house at first because I figured everyone in this neighborhood would be snobby. I had misconceptions of people that have money because, when you don’t have money, you assume things about people who do have money that might not be true,” admits Heather. “Sometimes I still feel embarrassed and don’t want people to have the same misconceptions about me because I have worn clothes from Goodwill.” While living a privileged life now, Heather says she never takes it for granted. “I think the perspective I have is that nothing is a guarantee. So enjoy it. Try to bless others with what you have.”

In fact, Heather does this by always welcoming people into her home. She has even been known to let other children have swim lessons in her pool while she is off running errands with her kids. Heather, who is now in school at East Carolina University, has four semesters left to become a speech pathologist.

Her mom, Ms. Cranston, also went back to school. This time, to get her masters degree in biblical counseling.

“My mom is one of the hardest workers and selfless people I know.” What is ironic about that statement, is that you will find many of Heather’s friends and family stating exactly the same sentiments about her.