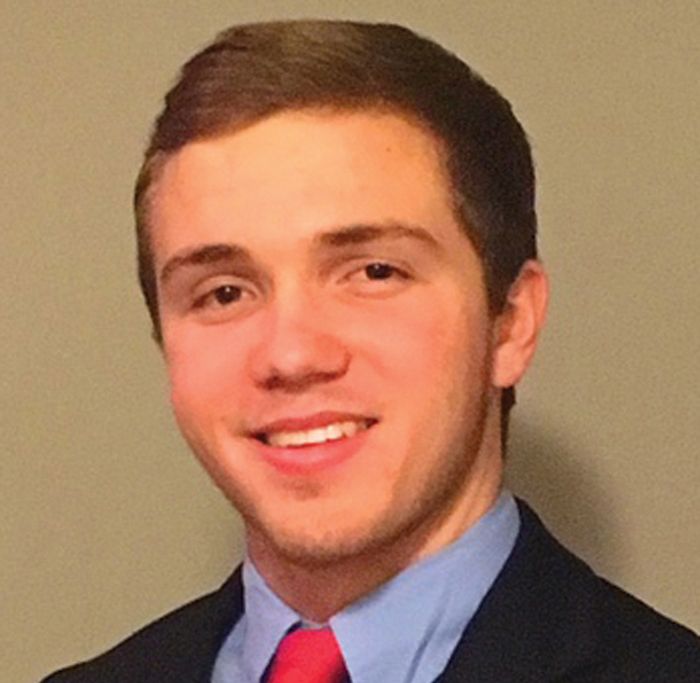 Connor Groce, 16, is a sophomore at West Forsyth High School and posts play-by-play action on Twitter of Titan games.

While Connor Groce is 16 years old, anyone have a conversation with him might easily forget his age. He seems that mature. As a sophomore at West Forsyth High School, Connor is a very involved teenager. He is on the football team, the swim team and the track team. Connor also competes on the academic team. However, the student at West is recognized, more often than not, for his social media skills.

He runs the West Forsyth Athletics Twitter feed. “I give the play-by-play for basketball, varsity football, and some of the big games like Reagan soccer or volleyball. I also tweet highlights for the athletic department,” says Connor. So how did this Twitter position come to fruition? It was because of the former athletic director, Durwood Pack. Since Durwood was not at the games anymore, he wanted to know what has happening each play. “Mr. Pack contacted the A.D. and said other schools do this. The A.D. knew me. So we made an account.”

With over 1,000 followers, Connor’s play-by-plays have become very popular among Titan fans, especially those who cannot make an away game. “I’m known in the student section as the kid who has his phone out the entire time and who tweets at the football game,” Connor laughs. “I think the students value it like everyone else.” Others realize the value in Connor’s social media skills as well.

Connor has set up Facebook accounts for other local businesses, including Brookwood Pool. “Brookwood almost closed down because of the lack of membership,” says Connor. “The pool offered a deal to get a half price membership. I set up a Facebook account for them. Membership went up and it was all through Facebook or word of mouth. It worked.” Connor does all of this pro-bono because, “I want to have an involvement in my community, so I’m trying to use my strengths.” Another one of Connor’s strengths is coaching and lifeguarding. He currently lifeguards at the YMCA pool from 5:00 a.m. – 8:00 a.m. In the summer, he lifeguarded at three pools. “This summer, I was at Brookwood, Clemmons West and Waterford,” laughs Connor. “I was fifteen and people don’t want to give the 15-year-old a lot of hours, but after working at all three pools, I was working full-time.”

The excitement in Connor’s voice elevates, however, when speaking about coaching. “I coach the Brookwood team with the limited kids we have. We didn’t win a meet, but it was a great experience. I look forward to that this summer.” With his active schedule, one would think Connor would not have the ability to be involved with one more extracurricular activity.

Somehow he finds time. He is a presiding officer for North Carolina Youth Conference. It is a statewide conference held each year and encourages youth to get involved in politics. “I am about to be an officer in the Young Political Leaders at West. We try to spread the word and get people to meet and discuss the issues.”

Connor has also discussed local politics with former Councilman Norman Denny. In fact, it was Connor, who set up Norman’s Facebook page for this past election. Connor discovered, “The interest in local politics is not there on Twitter.” Connor also notes the lack of interest in people his age. “Five percent of young people vote in local elections. One of my main passions is to get my generation in politics because we are the future.” Naturally, one assumes, Connor is an extremely smart kid with all the athletic ability in the world. Connor chuckles as he says, “I am not the smartest kid in the class, but I work hard.”

About playing football Connor admits, “When I got to West, I decided to play. I am really tiny and I have tried to beef up. I am going to work hard at anything I am going to do. I think the coaches saw that and appreciate it. I’m not the best on the team, but I am going to always try to make the best of what I am.” Connor adds, “I try to live life with the mind set — work for it. Don’t rely on anyone else to provide your happiness. You’ve got to go get it.”

What wise advice from such a budding young neighbor.