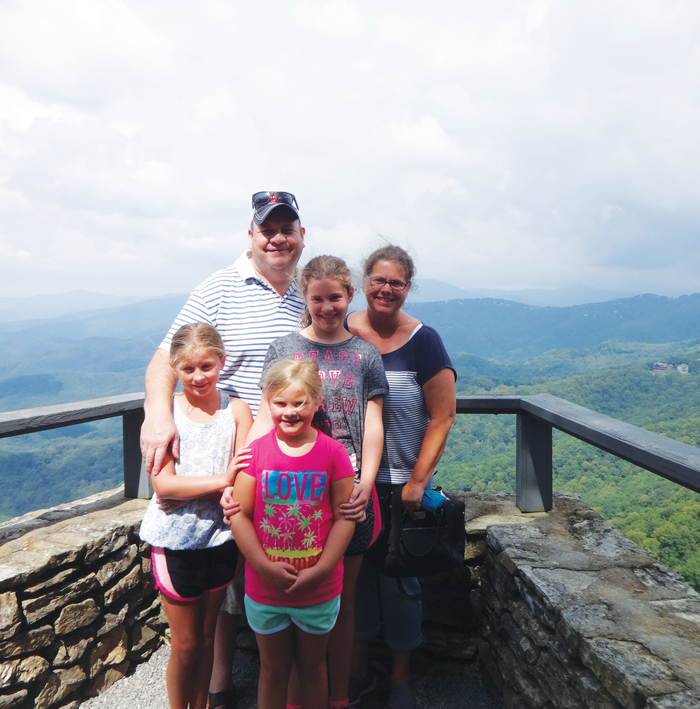 Joanne Hadfield, above, with David and their girls, Freya, Caitlin and Tegan.

It was only supposed to be temporary. When Joanne Hadfield moved from Derby, England to the United States, she thought it would only be for three years. As the youngest of three sisters, Jo never thought she would be the one to leave the United Kingdom.

“I’m the quiet one —the shy one,” says Jo in her mesmerizing, beautiful, English accent. “I never did anything wrong. I was the kid who cried when my mom would leave me to spend the night.” But once her husband David got a job offer in America, Jo decided to pack up her young daughter and the family’s belongings to head across the Atlantic Ocean.

David was working with Rolls Royce and was offered a three-year assignment with International Aero Engines in Connecticut. “In the back of your mind — it is not forever.” David told Jo twenty other families were going. So they would have other English friends making the same three-year journey. Jo found comfort in that.

She also liked the idea of leaving her job at a software company in order to stay at home with her daughter. Their daughter was only nine months old. “She was only nine months and then you take her away from two sets of grandparents. That was the hardest part,” admits Jo. Once the goodbyes were said and tears were shed, the Hadfields settled into Connecticut. Jo and David were surprised to quickly get pregnant once in the States. “We were told we couldn’t have kids. We had problems.

I had three miscarriages before Freya. When we had Freya we thought it would take a long time.” The two were pregnant with Caitlin when Freya was a year old. As Jo stayed at home with the kids, three years passed. David and Jo had to make a decision whether or not to stay since their three-year assignment was over. “We thought, ‘Let’s just stay another year. It’s really great,’” Jo smiles. “It got to the point where we kept extending. And if we kept extending, we needed to get a green card. But still, in the back of our mind, we were thinking, ‘It’s only temporary.’”

The longer they stayed, the less families came over from England. So eventually, they decided to head to North Carolina. David moved down first. Meanwhile, Jo was packing up herself and the girls. By now, she had a third daughter, Tegen. “The girls, the dog, and I had to live in a hotel for two weeks. That’s when you really miss your support from your family.

My friends helped, but there is only so much you can put on your friends.” Once in North Carolina, Jo fell in love with her surroundings. “England is not the England we grew up in. The main things I miss is friends and family,” says Jo. “But I feel more safe here. The kids have what we had as kids. We get texts from neighbors, ‘The kids are at our house.’”

Jo does admit there are some cultural differences, however. “English have very sarcastic senses of humor. Sometimes people here look at you and think, ‘You aren’t really going to kill your kids, are you?’” There are also words that are very different.

For example, when Jo asks someone to join her at the gym, she says, “Do you fancy to meet me at the gym?” Instead of the hood of a car, the English call it a bonnet; the trunk of a car is called a boot. Instead of side mirrors, the English have wing mirrors. “When you go to restaurants,” Jo laughs, “half the time you know they haven’t heard a thing you ordered. I can also tell that sometimes people aren’t listening to me. They are just listening to my accent. I’m sure I’ve done the same.”

While Jo was only supposed to be here temporarily, it is admirable that she was able to be open-minded enough to give this place a chance, to decide objectively if it was a good fit or not for her family. Perhaps, she agreed with what Goethe once said, “He is happiest, king or peasant, who finds happiness at home.” And how often have we heard that home is where the heart is? How nice to know she found that here, with us? Welcome home, neighbor.