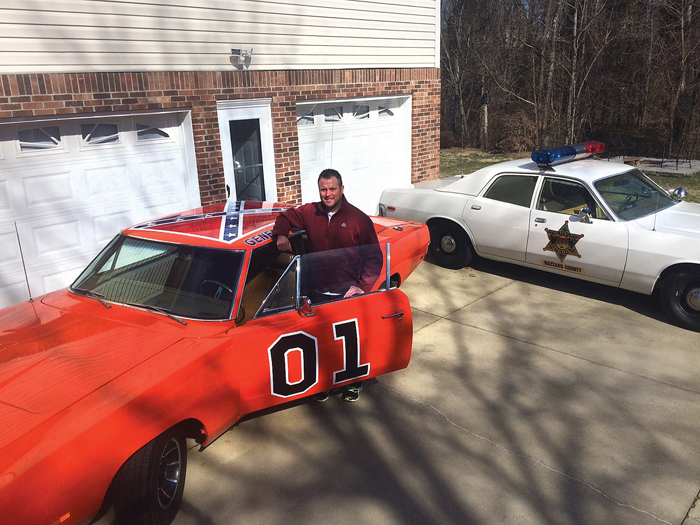 The roar of the car sounds similar to a race car revving up its engine at a NASCAR event. Earplugs could be worn if desired because the sound of Jonathan Zachary’s 69’ Dodge Charger is that loud.

The car is an exact replica of the General Lee, the famous car in the television series, the Dukes of Hazzard. Jonathan, the man behind the driver’s seat, has spent a little over $20,000 to recreate the classic look. But it does not stop there. Jonathan also renovated the 78’ Plymouth Fury to look like Sheriff Rosco’s car from Hazzard County.

In addition to the cars, Jonathan has three walls of memorabilia, including a Dukes of Hazzard lunch box, small plastic cars, and even posters signed by the mechanic who serviced the cars on the show. “I grew up around cars and I liked the stunts they performed on the show.”

Growing up in Mebane, Jonathan’s grandfather worked on a farm and sold produce. “He was always fixing his farming equipment.” The handy-man attitude was passed down to the next generation. Jonathan’s father was quite adept with his hands. “My father was in the United States Air Force from 1968 through 1972. He spent his time in the service working on aircrafts,” Jonathan says. “My dad was always into racing and working on cars. He was constantly working on things and fixing things, whether it was a light switch or a car. I picked up on that pretty fast.” As a kid, Jonathan was his father’s shadow.

Once the high school years hit, Jonathan became very involved with sports, especially basketball. Cars parts were replaced with basketball shoes. Less time was spent lying under the engine and more time was spent on the court shooting hoops. After high school, Jonathan pursued a degree in exercise and sport science at the University of North Carolina at Greensboro. Then he enrolled in the Radiology Technician Program at Forsyth Technical Community in Winston-Salem. It was right after college that Jonathan’s love of cars began to ease back into his life. “Dad never thought I would get back into cars.

He thought I would focus primarily on sports and didn’t think the cars would continue.” Not only did his passion for cars continue, it flourished. Jonathan began attending car shows and fixing up old cars. “The challenge of trying to figure out the issue, trying to troubleshoot, and figure out the problem is what I enjoy. Fixing it on my own gave me a sense of accomplishment type feeling.” Jonathan has his dad’s 1967 Plymouth Barracuda. “My parents drove off in this car from the church the day of their wedding.” Jonathan says pointing to the car. “I owe a lot to my parents. They’ve helped me a lot in cultivating my hobby.”

Kids around the neighborhood began to notice Jonathan’s hobby and would bring their friends over to see the new cool cars. “Their faces light up.” There was one kid, in particular, who wanted to see Jonathan’s Dukes of Hazzard cars. The boy did not live in the neighborhood. He was a friend of his fathers. The nine-year-old boy wanted to drive two hours from the Apex area to see Jonathan’s collection. Jonathan felt especially sympathetic to him because the boy has a brain tumor.

He was diagnosed a couple of years ago. “They did some treatment. The tumor went away but in a recent CT scan they saw the tumor was back. The doctors don’t know his timeline. It could be six months or five more years.” Seeing the little boy’s face when he arrived to Jonathan’s house is a memory Jonathan will remember his whole life. “I work with a lot of elderly people and giving them x-rays. I don’t work with a lot of kids. So this was kind of new for me,” says Jonathan. “It was pretty touching because we think we have problems and here is a kid that is nine years old — you can’t even put it into words. It makes you appreciate life and your health.”

The boy took a picture next to the General Lee, which of course displays the Confederate Flag on top of the car. The flag has sparked some dissension over the last year or so. “There’s been some controversy because of the flag, but I just hope to spread a positive message because for me, it is about the cars and seeing the expression on the kids faces.”

For our neighbor, working on his cars probably even reminds him of his childhood days of following his father.