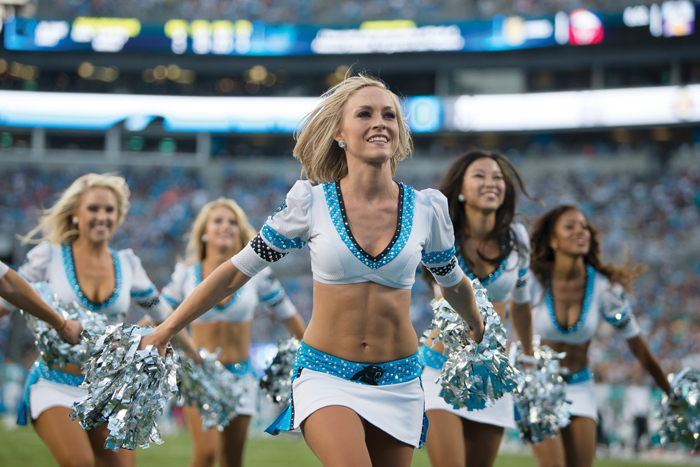 Morgan Elementary 3rd grade teacher Megan Sclosser spent the Super Bowl on the sidelines cheering for the Carolina Panthers as one of their TopCats. — Photos provided by the TopCats.

Many of us were surrounded by friends, chips and delicious dips while at home watching the Super Bowl. Megan Schlosser, however, was on the sidelines.

As a Carolina Panthers TopCat, she got to see firsthand, what is was like to be on the field during the biggest NFL game. “We stayed in San Francisco where there were a lot of appearances,” says Megan. The grueling schedule began Friday night with a short appearance on the NFL network. Saturday, the girls woke up early to work with a camp that invites cheerleaders and football players to teach kids cheer moves as well as how to do different football drills.

She began student teaching at Morgan and was hired before she even graduated. “A position opened up before I was done at App. I got to meet my new class and began teaching them two weeks before I graduated.” Megan enjoys teaching third graders because, “…They are still so little but want to be so independent. I am more of a little kid teacher anyway. I think 3rd grade would be the oldest grade I would ever teach.” Everyone at Morgan knows that Ms. Schlosser loves to dance. Megan says she is especially thankful for that. “My kids are my number one fans. Even the faculty all support me.

That is not something you see everywhere. Even my principal. I love the people I work with.” Like Morgan, Megan says the TopCat organization is also top notch. The girls pray together before games, support each other when someone suffers a death in the family, and always celebrate one another’s birthdays. “It’s like a sisterhood with lifelong friends. I feel really lucky.” The TopCat says she and the girls are not just required to dance, but they are also very community-minded. “There’s a lot of behind the scenes people don’t see.” For instance, the dancers work with Make-A-Wish foundation and go to different children hospitals. “That’s some of the coolest parts of this job. We do a summer camp called junior TopCats and another three week long clinic where girls get a uniform and dance at a game with us.”

Dancing is something Megan has done since she was just three years old. It was her preschool teacher who first noticed Megan’s natural ability. The teacher encouraged Megan’s mom to put Megan in dance because the three year old danced around the classroom everyday. “My mom signed me up with two of my friends. Once they stopped at five, she thought I would, too. But I told her I wanted to dance because I loved it.” Dancing meant long practices and many competitions. But Megan adores it. “Dancing relieves stress and is something I want to do all the time.”

In fact, when Megan became a teacher, she stopped dancing for about six months. Nonetheless, she could not stay away. It was at that time, she tried out for the TopCats. “Last year was my first year auditioning,” says Megan. “We all try out each year. It’s a month-long audition with interviews and different tryout levels with learning choreography. We have meetings involving business opportunities and how you would work for the team.

They pick not only good dancers but people who represent the organization.” It was the TopCats and Panthers representing North Carolina at the Super Bowl. “Security was top notch with search dogs and all the different agencies lined up miles long.” Perhaps the greatest experience for Megan, was the initial feeling she got as she walked out onto the field in Levi Stadium in Santa Clara, California. “It was probably the best part of the game.” As for the outcome of the game, Megan acknowledges, “It wasn’t what we had planned. We were hearing from all the sportscasters we were projected to win the game. Being out on the field, the team did seem a bit off. Denver played better that day. But we always have next year.”

This year, Megan plans to move to Charlotte to be closer to her Panthers and her friends. Who knows? Maybe once our neighbor starts a family, Clemmons will be calling her back home. Either way, there is no doubt that Megan will keep living by the same rousing words of encouragement as the Panthers.

She will “Keep Pounding.”