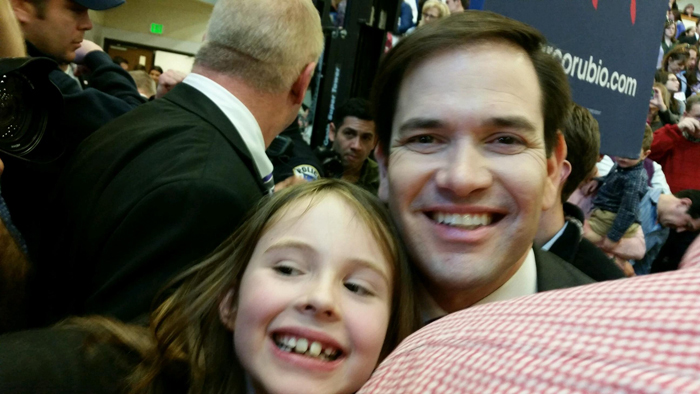 PURCELLVILLE, Va. — The above headline is accurate, but that’s not the end of the story.

Did they fear she would chuck it at him?

Maybe the newspaper is too controversial? We had cheerleaders on the front page. Maybe we were tarred and feathered along with the New York Times and Washington Post as one of those “liberal mainstream newspapers” fearful Republicans like to bash.

With great care and artistic talent, my sweet Cayden, 7, had fashioned a handmade poster for the event, penciling “Ready for Rubio” on a yellow background with multi-colored dots on one side and a recent front page of the Enterprise-Record on the other.

Get his picture reading the newspaper, I had instructed.

She tried. Oh, she tried. But handmade signs were banned. Everybody was issued the standard, boring official Rubio poster. Little Cayden had to leave her artful poster and newspaper outside. The insult would have been enough for less stalwart fans to switch to Hillary Clinton.

“What about freedom of the press? The 1st Amendment?” I asked little Cayden’s mother by text.

I was ready to officially endorse Sen. Ted Cruz.

She and Cayden positioned themselves by the roped entrance and waited for the presidential candidate to show. He had to walk right past them, she calculated. And he did.

Mother Susan was ready with camera to snap the moment. Rubio paused for a gracious moment for the picture.

Little Cayden was very impressed, forgiving the initial insult of having her poster seized like contraband.

She said Rubio looks like her Uncle Michael, and she loved her first-ever political rally at a packed auditorium at Patrick Henry College.

Rubio is back in my good graces. But if he’s elected, I worry about the future of art in America. The guy has poor taste.