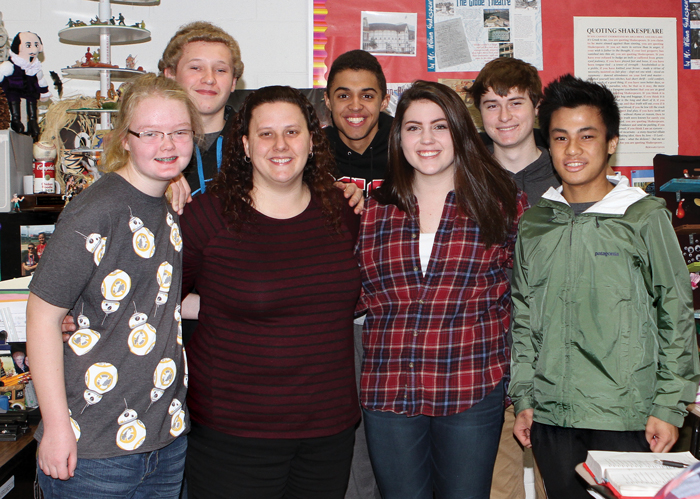 In Shakespeare’s The Taming of the Shrew, a rich father declares his beautiful, young daughter will not marry until her older sister, Katharina, has wed. No one wants to wed Katharina. She is a shrew. Everyone wants to marry the younger sister, Bianca. As expected, the comedy has plenty of suitors who try to woo Bianca, while also trying to solve the problem of who will marry the shrew.

To a sophomore at West Forsyth High School, the Shakespearian tale may at first look like a simple requirement on a syllabus. But when the student reads the story in Theresa Bryant’s class, the words come alive. Ms. Bryant teaches sophomore English and Shakespeare as an elective. Yet, she is known to do some out-of-the-box teaching. To bring The Taming of the Shrew to modern application, Ms. Bryant requires the students to create a social media page with each of the characters. The students must provide a profile page, send out tweets, use hashtags, send messages back and forth, etc. “It lends to a whole different way to learn,” says Ms. Bryant.

In fact, she realizes that all students learn in various ways. “I do a survey at the beginning of the year so I know who learns visually, how many learn kinesthetically, and how many orally. Then, I teach accordingly.” Ms. Bryant admits one of the reasons she likes to teach to each child based upon their needs, is because she grappled with academics herself. “It was one-sided,” Ms. Bryant recalls about her days as a student. “Teacher lectures — you write down notes and that’s it. I struggled. I didn’t take AP courses. I didn’t get a full ride somewhere. I worked. I worked when I got my masters at App.”

In Ms. Bryant’s class though, her students not only work for the sake of completing their sophomore curriculum, but the West Forsyth teacher likes to prepare her students for the future. “Literature is a place for you to escape. I don’t just have to get the students ready for a test or junior English or college … I have and want to do so much more than that.”

Ms. Bryant’s dedication and drive were recently awarded when she won Teacher of the Year. “I cried,” Ms. Bryant laughs when talking about her reaction. The day she received the award, was the last day right before Christmas break. It was late in the day and Principal. McAninch came in with a bouquet of flowers along with some other fellow faculty members. One of the reasons she was given the distinguished honor, is because of her dedication to the school. Her appreciation and continued commitment were evident when she noted, “I love the idea of giving to people — whether my students or people I work with. I love giving them friendship and knowledge. I try to be as positive as I can.”

Ms. Bryant admits she feeds off of their energy and misses the staff and children during the summer months. She may, in fact, be one of the few people who does not look forward to June, July, and August. “I go into a comatose state,” she jokes. Her two kids, however, do keep her busy. Carissa is a 7th grader at Meadowlark Middle School and Daniel is ten years old and attends Brunson Elementary. They both plan to attend West. They live and breathe the Titan pride with all of the sporting events that Ms. Bryant attends. “Even if I don’t have a student playing that sport or acting in the play, I like to go and support the kids.”

With such dedication to West, one would assume Ms. Bryant graduated from West. She did not. Ms. Bryant is a New Yorker. “My dad grew up in the Bronx and said he didn’t want that for his kids. So we moved down eventually in 1990 with his job, American Airlines.” New York, however, was where Ms. Bryant realized she wanted to become a teacher. Education in a Catholic school, Ms. Bryant saw her older sister strive towards good grades, however the process seemed to be quite arduous for her sister. “She didn’t fall into a label — ADHD or dyslexia– they didn’t really do labels. She was just different. But the teachers and nuns worked to make accommodations to help her. When I saw people doing that for her, I thought, ‘I want to do that for others.’” Clearly, she has. Many people assert that teachers are under-appreciated and are not financially compensated for the influence they provide to the young inquiring minds of our youth. But just know, Ms. Bryant, you are a neighbor who is appreciated. As William Shakespeare said, “…evermore, thanks.”