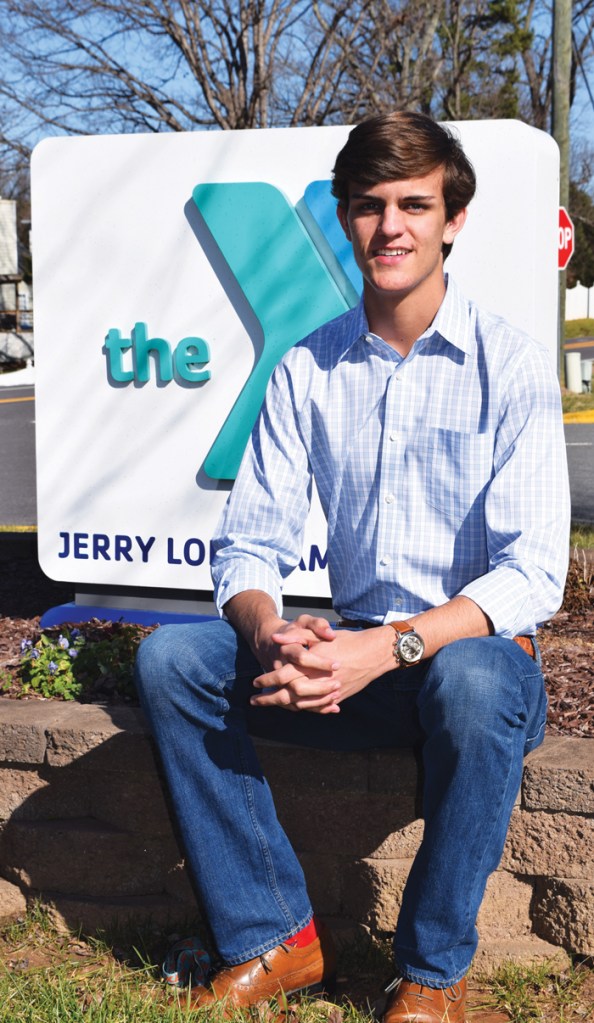 Bennett Gould may hold the title of governor, but he’s interested in a career in math and engineering.

He’s already served one term as Speaker of the House and now he’s Governor of North Carolina. Not bad for a high school junior who’s only 17.

West Forsyth’s Bennett Gould has been involved with the YMCA sponsored Youth And Government since he was a freshman. The program allows young people a chance to take on the various roles of those elected officials involved in state government to learn how it works. “A friend of mine who attends a different school had been involved and said it was something he thought I would enjoy,” Gould said. As a middle school student at Forsyth Country Day, Gould had participated in student government. “I enjoyed that and decided to give YAG a try.”

He said YAG is set up so that students may participate in different programs based on their interest, such as legislative, media and a judicial section. For example, if students are interested in journalism or television news, they would want to be involved in the media program.

There are 90 students at West Forsyth who are involved in YAG and approximately 1000 students statewide. “I joined the legislative group and we learn all about parliamentary procedure, how bills are written and carried through the legislative process.”

He wrote his first bill as a freshman and it made it all the way through the legislative process and was signed by the governor (YAG governor). Gould said he them moved into the executive section, which is where students are elected to actually run the program. He was elected to the forum as a freshmen and in his sophomore year was elected as Speaker of the House at last year’s state conference.

At this level he was doing a lot of traveling all over the state to be involved in regional conferences and meetings. It’s a busy schedule for someone who runs tract for West Forsyth, is a member of the Math Honor Society, Science Honor Society, National Honor Society, on the Student Leadership Council and a member of the Science Academic Competition Team. Still making time for the YAG program has been worth the effort because of what he’s learned and experienced. “We get to experience the entire process of government, including writing bills.”

He said students at the local level around the state are writing bills, and then a review committee determines which of those bills move on to the state conference.

Earlier this month Gould was back in Raleigh for the state conference and this time ran for governor. “Candidates had to submit a video based on the three words – Engage, Advocate and Act – and answer questions from the media group. They also had to prepare a speech to be delivered to the entire conference. “At one point I wasn’t able to stand up in front of group and make a speech, but that’s one of the things have I’ve learned to do through this program,” Gould said. “It’s given me confidence and I’ve learned leadership skills. I’ve also learned a lot about the governmental process and have gotten to know people from all over North Carolina.”

Gould will serve as governor through next February, which again means he will be traveling around the state. He also will be attending a conference in Washington, D.C. with governors from all the other states with similar programs.

So what, if any, are his political aspirations?

“It’s funny, but what I’m studying doesn’t really have anything to do with politics. “I’m interested in math, physics and engineering. In a perfect situation, I would love to go to college at Stanford, but a very small percentage of applicants make it.”

While he doesn’t plan to go into politics, he does pay attention to what’s going on at the state and national level. “National politics are too partisan and nothing gets done. In YAG we work together and can accomplish positive goals.”

In one of his Twitter messages he wrote: “Favorite thing about Youth And Government is that it is nonpartisan. The biggest fault in modern politics is a lack of compromise that stems from partisanship.”

With that understanding and mindset, perhaps it’s disappointing that Gould isn’t going into politics.