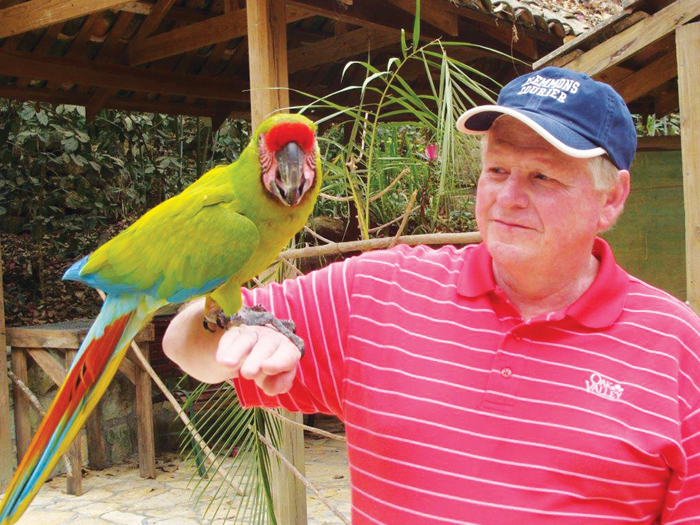 People know Doug Hill as the type of person who has a zest for life. Between he and his wife, Linda, the couple have three children and a handful of grandchildren with an additional one on the way. “The grandkids call my wife, Lolly, and they call me, Pop. So together, we are Lollypop,” Doug smiles. The proud Pop goes on. “My daughter’s last name is Sharpe. She hasn’t named her baby yet, so I call it, Extra. Extra Sharpe.”

Doug admits he could easily talk about his children and grandchildren for hours, but finally talks about himself after being prodded. Doug was raised in Iowa. Growing up in the heartland meant walking miles to school, riding horses, and tinkering with his dad who constructed household items built to last. Doug also grew up attending a Lutheran church. His father was turned off by religion because Doug’s grandfather was extremely religious. “My grandfather had Bibles all over the house. I think my dad rebelled. So church was not something my dad wanted to do. He didn’t have a negative lifestyle, it was just different from my grandfather.” Like his father, Doug is a natural carpenter. He has built two dining room tables, one that seats fourteen people. Naturally, the request for furniture from family members is ongoing, especially for the grandchildren.

In addition to his penchant for carpentry, like his grandfather, faith has played a huge role in Doug’s life as well. “I gave my life to Christ when I was 25. I kept telling people I was Christian but I did not make a profession of faith until April of 1975. It’s been one of my goals to be as positive and Christ-like as possible in the public and with my neighbors. It’s an important decision we each have to make.” Ever since, Doug has been doing what he has done since he was a little boy — playing while also weaving in the Gospel. His job prepared him for the activity of play and involving God. Doug was hired and worked as a Director of Miller Park for the Winston-Salem Recreation Department. In fact, he was the one who named the street in Winston-Salem, Leisure Lane. He was even the led disc thrower for the National Frisbee competition in the late 70’s. Doug also lead many national and local events hosted by Winston-Salem. “It gave me a lot of foundation in dealing with all types of people. As a result of that, I think it prepared me for what happened in 1985.”

In 1985, Dr. Mark Corts asked Doug to be a part of a new trend in churches, recreation ministry. Doug agreed to devote his time and youthful energy to playing sports while intertwining the Gospel. “I tell people I’ve been a professional athlete for 46 years because I’ve been paid to play.” From playing basketball to exercising in workout classes, Doug does it all. He’s played in over 70 golf tournaments and been involved in thousands of games on the diamond. “Recreation ministry is a backboard to get people in to church. It is nonthreatening. It is safe. We get them here and share the Gospel with them. As a result of providing a myriad of programs — a senior work out class, boot camps, to softball leagues — we get to share the Gospel.”

It is not just locally that Doug plays and prays, he has been on trips through the states and overseas. “We’ve been to China on a sports mission trip on a basketball team. We played against two guys that were 7’4”. We called them Shaq and little Shaq. Through the basketball program, we see the kids come to Christ.” Doug, the little kid at heart, has enjoyed the games and camaraderie. Nevertheless, Doug says it is time to step down. After 31 years, he will retire this month. It is bittersweet, Doug admits. “The routine of meeting people and sharing Jesus — I won’t have that platform to do it anymore. It’s very easy because I have people coming to me. Now it looks like I may have to come to people,” laughs Doug. It is highly doubtful that will be the case.

This neighbor seems to be the type that many will seek guidance from for many days to come. In fact, the words of Juan Antonio Samaranch at the opening ceremony of the 1996 Olympics in Atlanta may be appropriate to his journey. “Sport is friendship. Sport is health. Sport is education. Sport is life. Sport brings the world together.” “Your Neighbor” is a feature by Jill Osborn. If you have a neighbor everybody should know, reach Jill at jill.n.osborn@gmail.com. Also follow her blog on parenting at MuchAdoAboutMothering.com/