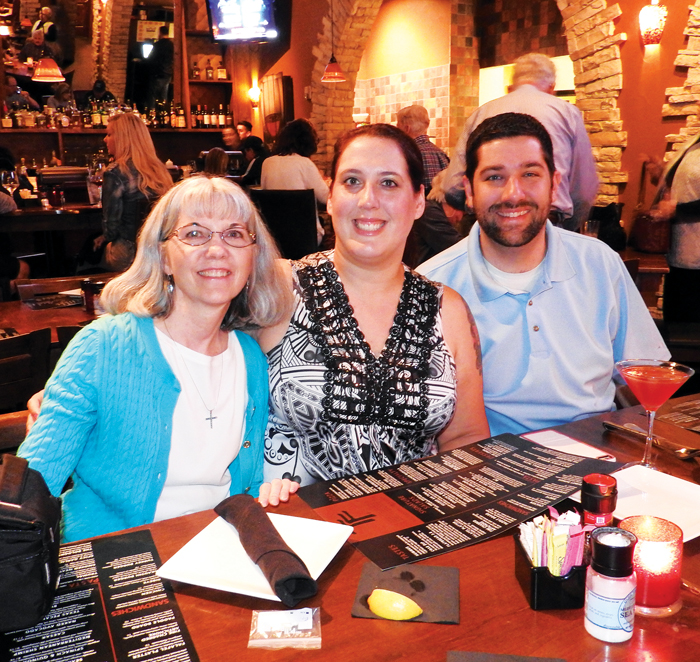 At left, Kay Stocking with her son, Brendan and daughter-in-law, Angie.

“I felt the need to do something,” says Kay Stocking. “It was an escape.”

Kay was trying to escape the pain that can often accompany taking care of a parent with Alzheimers. “Sometimes, when helping someone with Alzheimers, you kind of lose yourself.” As Kay’s father struggled, she was the main caregiver who stood by his side during his hardships. But she was suffering, too. “I do not know how someone can go through that without knowing the Lord Jesus. I got to the point where I quit looking at the days to come and thinking, ‘How am I going to keep going at this rate?’– to thinking, ‘I am going to live by the grace He has given me today. Live today.’”

During that time, Kay said she felt a certain calling. She felt as if God was leading her to another cause as well. Kay’s two sons had graduated high school and were in college, leaving her time to consider other options in her life. In the past, she certainly did not have time to volunteer because she had been busy homeschooling both of her boys. “There were days I wanted to pull my hair out when I taught them, but I never regretted doing that. It was great to see how they learned and how it worked with one and not with the other. They learned so differently and it was something they both wanted to do.”

Later, with both boys gone, Kay wondered if she had the time to volunteer somewhere. She questioned whether or not she had the mental strength.

“I fought it for a while. But when I felt the Lord stirring me to do something else — when He puts something in your heart — you can’t ignore it for long.” Kay finally accepted the challenge and signed up for Meals on Wheels. She decided to deliver meals to the elderly once a week.

“I found I had more empathy than I would have had for older people because I had already had time in the nursing home. Until my dad went through Alzheimers, I wasn’t probably as sympathetic toward the elderly — what they go through physically and what they go through mentally. They struggle.” acknowledges Kay. “Meals on Wheels made me feel useful.”

Leaving her house about ten minutes after ten o’clock on Thursday mornings, Kay would pick up some meals in downtown Winston-Salem and then deliver them to the east side of Winston. Once the meals were delivered, she would visit her father around noon. “I developed a real attachment to the people I delivered meals to. I consider them sort of family. I was delivering them food, but I was getting a whole lot in return.” Her friends helped her when her father was struggling with Alzheimers. They also distracted her when he eventually passed away. Kay, however, continued to deliver meals because she felt so connected to her friends who relied on her service.

Kay began to deliver meals in 2003. Last year, however, was a tough one for Kay. “Last year was really tough because two of the people I had gotten really close to had gone to assisted living. I continued to visit them.” Both, however, passed away within a couple of months of each other. Another lady Kay saw every Thursday passed away on a Monday — just a couple days after Kay had seen her. Losing friends, who felt like family, took a toll on Kay. “It was sad. I thought about getting out for awhile because I realized how likely after having lost more friends,” said Kay. “But how much richer I am because I got to get to know them for such a period of time.”

Kay believes it is through God that she has such a giving heart. “It has to be the Holy Spirit. He lives in me and He’s a giver. I give financially, but I like to be hands on. It’s easy to throw money at an organization, but you get a lot more when you work with them and are invested in them.”

We thank our neighbor for being invested.