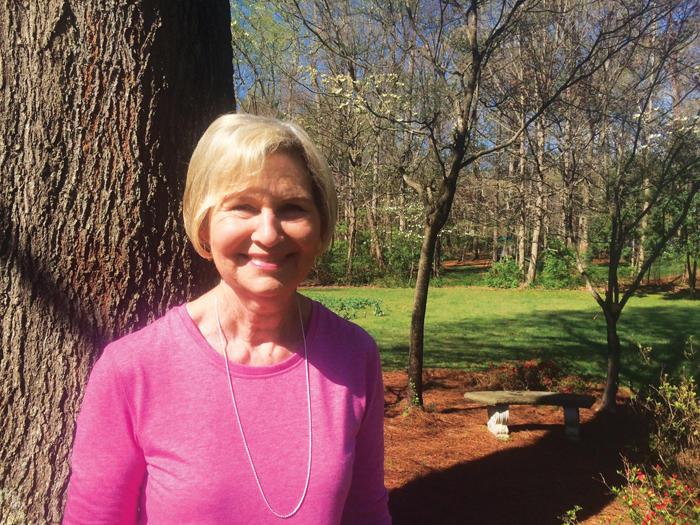 Betty McCann stands outside her Clemmons home in her carefully manicured lawn.

“It thrills me to death to see another woman out in the yard working because sometimes I think I’m the only one,” says Betty McCann. “It’s exercise for me. I push the lawn mower in my front yard. He is responsible for the back on his riding lawn mower,” Betty says of her husband, Buford. Betty can be found outside working in her yard most days. Whether it is mowing her perfectly green grass or trimming the beautiful arrangement of flowers and bushes, Betty diligently tweaks her work of art.

“I’ve always enjoyed doing yard work. I’ve done it ever since I had a home. Ever since I was a kid,” Betty reflects. As one of four siblings, Betty was expected to work around the house. Since there was one boy and three girls in her family, there were no gender differences in who did what chore. So Betty, of course, was drawn to keeping up with the yard.

Being outside as a kid and playing with her siblings and cousins who lived nearby was fun for young Betty. But what she really loved most, was spending time with her maternal grandparents. They lived right up the road and they spoiled her and her siblings rotten with love and affection. “They were such wonderful people. They were more of an influence in my life than my parents were. They were church going people so that kept me going. They always treated us good — because you know my parents were the disciplinarians and my grandparents didn’t have to be,” Betty laughs. Betty’s grandfather owned a grocery store. She and her siblings loved to play among the different food aisles. “My grandfather didn’t supply us with all the stuff we wanted to eat,” Betty laughs, “like candy and all that — but he would always give us stuff.”

As a teenager, Betty remained close with her grandparents but she also began to observe the friends her older brother would invite over. One in particular stood out. Buford McCann. Buford began to notice Betty, too. They began to date and at the young age of seventeen, Betty and Buford married. Once they got married, they moved to Forsyth County. Like her parents, who worked hard, Betty worked hard in her new household. She worked for the Hanesbrands, at the then Hanes Hosiery store for fourteen years. Six years into their marriage, Betty and Buford had a little girl. Soon after, they added another daughter to their growing brood. Paige and Sherri were both raised in a hard working environment. Betty was a homemaker for three years when Paige was first born and then went to work for a doctor. In the meantime, she decorated her home and has even helped decorate other friends homes as well.

Eventually, she decided to retire from her day job. “The doctor retired after I had been working there for fourteen years. I thought that was a good time for me to retire, too.” Betty may be retired professionally, but that certainly does not mean she has slowed down. “I feel like I have to accomplish something, even if its not something big. I just feel like my day is wasted if I’m not doing something.”

Does she travel a lot? Not as much as she used to. And her means of transportation has shocked most of her friends. “So many of my friends are so surprised that I’ve traveled so much on my husband’s bike.” Maybe it is because the sweet, soft spoken Betty does not really seem like the leather jacket, black helmet type. “I don’t have a leather jacket. I guess I’ve always ridden in fair weather,” Betty laughs. She says that she and her husband used to take trips up to the mountains for the weekend with other couples. They have also ridden to Daytona Beach in Florida for bike week on a handful of occasions. Although, after one cold trip on the return home from Daytona Beach, Betty decided her bike trips to Daytona Beach were done. “My daughter worked as a flight attendant at the time, so Buford would ride down and I would fly down to Daytona Beach,” Betty chuckles.

Nowadays, Betty says her life is full of grandchildren. She brags about her four grandsons and says she wishes they were closer. Two grandchildren are in Charlotte and the other two reside in Atlanta. “I want my grandchildren to have good memories of me. So that’s what I’ve always tried to do with them. I’ve tried to do good things with them so that they would have fond memories of me like I had of my grandmother.” Surely, Betty has no problems keeping up with her young grandsons either. She walks two miles on her treadmill every morning and then goes out in her yard for more exercise and sunshine. She’s even been known to split her monkey grass into halves and share it with her neighbors simply because, “I like to share,” she laughs. Betty’s parents and grandparents were the same — active and giving. “My parents were 80 and 85 when they passed away. My grandparents were 90 and 93 years young. We are from a family of long-livers.” Sometimes it is a comfort just to see a neighbor like Betty, out in her yard, with good ole’ fashion values.