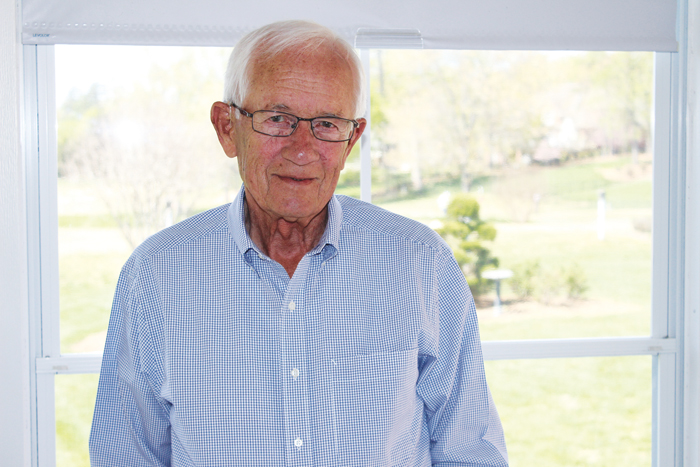 Reg Yarborough has been involved in the foundation of youth sports in Clemmons.

Growing up as a twin, Reg Yarborough would often switch places with his identical brother. In school, he switched classes. Many people have had entire conversations with him, thinking Reg, was his twin, Rich. While the two grew up on a dairy farm together and worked tirelessly in between playing sports, the have led very different lives as adults. Reg was drafted. Rich stayed back home in Old Town, North Carolina, because of a bad back. Life changed for each. Rich got married. Reg began to see the world through the Army’s eyes.

Stationed about thirteen miles from Killeen, Texas, on a NASA Base, Reg was a MP or Military Police. “Our base was gated and top secret. The FBI came in and talked to us once a month. You had to have full identity to come on there. I would work the main gate, the patrol, out in the village. MP’s had a lot of guard duty,” says Reg. It was in Texas where Reg got his first coaching job. He coached a little league team while also playing on the base’s basketball team. Reg loved to be around people and had a love of sports.

After his time in Texas, Reg moved back to North Carolina. He was hired at Reynolds as a salesman and became a member of the international department. He was relocated to Rochester, New York. It was there that he met Judy. The couple fell in love and moved back to North Carolina to raise their growing family. Back at home, Reg not only found himself working, but volunteering as well. As his children became involved in sports, Reg naturally began to coach. All three of his boys played and all three of his boys were coached by Reg. Then, in the mid 70’s, Reg was asked to join the Little League’s Board. “At that time, the teams were splintered with four different fields. We had one at Lewisville School, Clemmons School, South Forks School, and another field on Jonestown Road.” Reg’s job on the board, was to take care of the fields and look into the building of one complex. He had the idea to get in touch with T.W. Poindexter of Poindexter Lumber. “T.W. was big with slow pitch softball because he had a team that traveled the country. He had built two fields and the complex.” T.W. wanted to sell the complex. “T.W. said, ‘You guys have any money?’ I said, ‘We have a nickel and dime,’” laughs Reg.

Fortunately, the banks were very interested in loaning money to community projects at that time. “We had to have eleven different board members sign, but we got that loan.” T.W. agreed to put in two small fields for kids 8-12. The Little League added two other fields. “We brought it together, adding one field at a time. We maintained the field, head of fields and grounds.” Reg even put in one of the fields with a tractor, sowing the yard — the whole nine yards. He built the dugouts and the makeshift concession stands. After all, he grew up on farm and knew how to work the big machinery from sunup to sundown, using that experience and energy to help build what is now Southwest Little League. Reg says the complex today is “… above standard — new lights, astro turf.”

But Reg’s involvement does not stop there. Reg’s athletic boys also liked to play basketball and football. Reg became president for the Clemmons Cowboys, which is now the Broncos. He also helped spearhead the youth basketball program, the Clemmons Cougars. “We only had four teams in the beginning,” recalls Reg. There was just one problem. For basketball season, Reg needed a court. For football season, he needed a field. So Reg turned to the principal of Clemmons School for the keys to the gym and the access to their football field. The principal at the time was Frank Morgan. Mr. Morgan agreed and the two were instant friends. “Frank and I had a good understanding. Frank said, ‘Some of these guys I don’t know about, but I can trust you.’ Frank and I worked all the time together.”

As Reg’s children attended West Forsyth High School, he became involved with the OK West Booster Club. When he first began the Booster Club, it was in the red. Then, he and other members began to ask the parents for money. “I felt they had an obligation to help the students and help the school.” They began to get a lot of money. So much, in fact, the papers took notice and wrote a story on the thousands of dollars the club had raised, with Reg in the photo.

In 1978, the Clemmons Jaycee’s gave Reg the Citizen’s Award. Reg said he volunteered all this time because it allowed him to spend time with his children and because he enjoyed the people. “We had good people involved. You’ve got to have good people.” yes, it is good people like Reg Yarborough who help build a healthy community of neighbors supporting our youth.