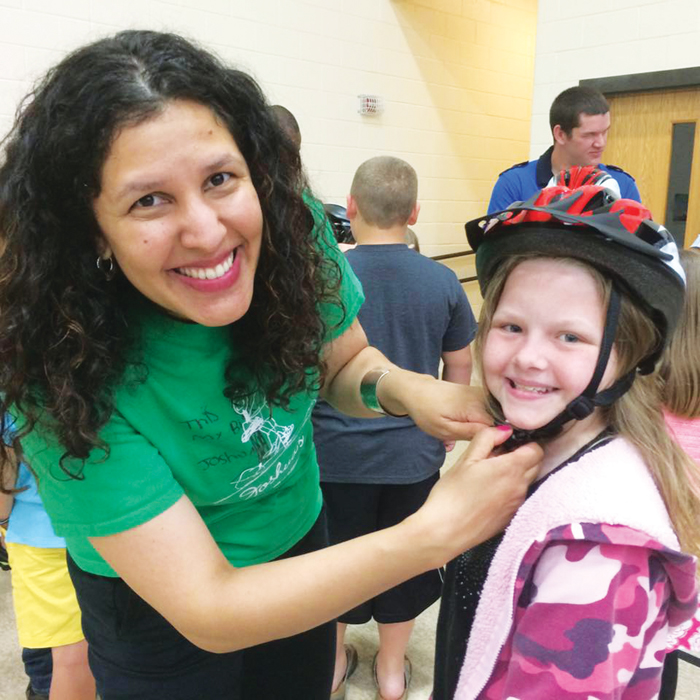 Luly Beckles helps a girl adjust her bicycle helmet. Her son, Joshua, died on his bike when hit by a car 10 years ago.

Ten years ago this May, Luly Beckles felt like she a had pretty good grip on life. She was raising three children, a seven-year-old, four-year-old, and two-year-old. She was happily married and worked as a social worker helping other families find childcare in a safe and loving environment. “I thought I knew everything under the sun about how to keep your family safe.”

Then out of nowhere, Luly’s life changed in an instant. Luly’s seven-year-old son, Joshua, was riding his bicycle with his helmet. She taught her son the importance of a well-fitted helmet. He was riding on the correct side of the road. A neighbor, however, was driving on the wrong side of the road. He was drunk. He hit Joshua. Joshua did not hear the car coming or see it in his peripheral vision. Luly would later learn children are not able to hear cars as quickly as adults because their hearing is not fully developed, nor, are they able to see them as quickly. “By the time Joshua saw the car, it was too late, and he had nowhere to go,” says Luly. Joshua was taken to the hospital and he died within three hours.

The doctors said the only reason he was able to survive for those additional three hours was because he was wearing a helmet. For the next week, Luly could not get out of bed. She cried everyday. The following weekend, her four-year-old had a terrible rash. It was poison ivy. Luly was needed. She forced herself to get out of bed and mother her two surviving children. Unfortunately, Luly still had to deal with the legal system. “From the day he died, my baby, who was seven, who loved trains, coloring, and bikes — became a criminal case. We had to go to court against the drunk driver because he claimed he was innocent.

Then, we had that whole painful ten months of a criminal case.” During that time, Luly learned a lot about bike safety. “A bike is not a toy. It is a child’s first vehicle. So they must comply with the same rules of the road. It is the law to wear a helmet,” notes Luly. “I had two choices — to become an angry, mean woman and lash out at this man who was caught for drinking and driving. I knew I couldn’t control what had happened with him. I knew hatred wasn’t going to do anything for me.”

Luly decided to focus her energy on bike safety. She created a foundation called, Bike Safety Day. She chose to have it every May in memory of Joshua. “The first year, we had over 500 people. We hoped to save about 200 lives because we were able to provide 200 helmets through donations,” says Luly. The event has continued to be a success. Last year, Luly decided to partner up with the City of Winston-Salem and be a part of Walk and Roll. With various fun activities, the event is this Sunday, May 1st, on East 3rd Street at Research Parkway. (More information can be found on cityofws.org)

It is not just through this event that Luly provides safety information. She also carries helmets in the back of her car and will pull over her if she sees a child without a helmet. Some mothers will get offended when Luly offers the child a helmet. “I tell them, though, it is a moral obligation for me because of Joshua.”

Luly admits she cried over Joshua every night for the first five years. She says she aches for him everyday. She admits that other families did not want to be around her or hear her story because no one wants to talk about a child dying. She even apologized profusely during this interview if she had upset me since I, too, am a mother. But Luly’s message is an important one and needs to be heard. “We reminded people that your child could die. We were scary. But I also had family and friends who went above and beyond to carry me through — like Joshua’s teacher. He had never lost a student. But he came over every Sunday to have breakfast at our house.”

Over the last nine months, Luly has been able to work with Joshua’s doctors and nurses first hand. She recently accepted a job as the Pediatric Injury Prevention Coordinator for Brenner’s Children Hospital. “The number one killer of children are preventable accidents. The vaccine for injury is prevention.” Luly adds, “It is an honor to work with families after they have an injury. I come to work everyday where my child passed away but I know he had the best care he could have.” She also admits that a little part of her died that day with Joshua.

She is no longer the same woman she was when Joshua was alive. But she has tried to channel her pain by helping others prevent injuries or bike accidents. “When Joshua died, it was like I went to war and I came back injured — never the same. But I have two other kids. I have to be here with my kids.”

Luly says she also relies on her faith. “I believe in my higher power and I do think Joshua is in heaven.” Perhaps for all her strength, heartache, and encouraging work there is a special spot in heaven for our neighbor, Luly.

To sign up for safety tips for kids or for more information, go to safekids.org