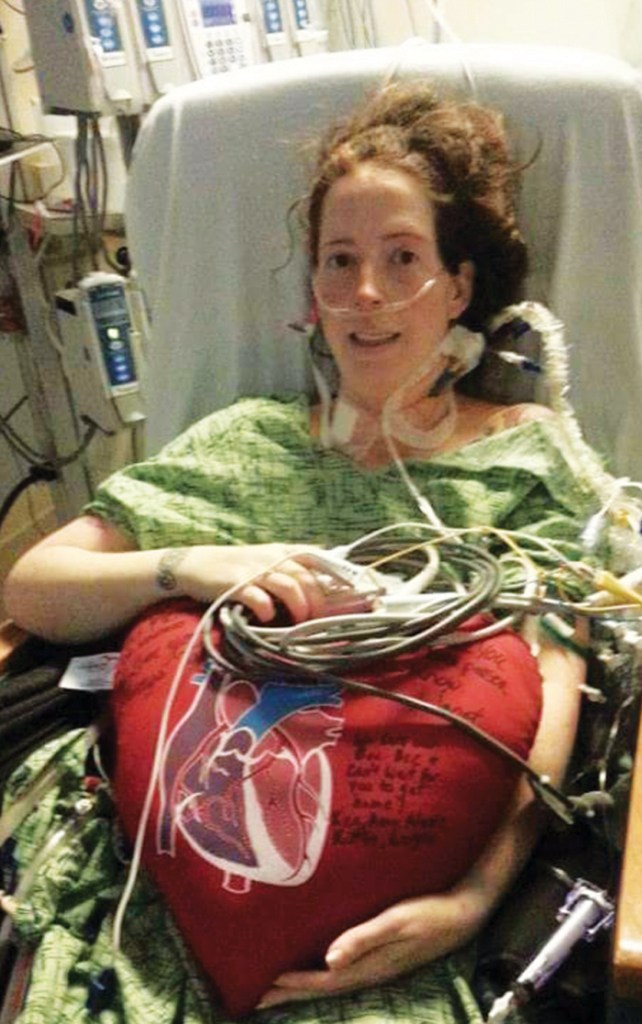 Rebecca Stewart almost lost her life while delivering a new life. During the early stages of pregnancy, Rebecca believed she was just experiencing the typical woes of pregnancy. “I was sick morning, noon and night,” Rebecca recalls. “We thought the baby was pushing on my lungs which is why it was hard for me to breath. I had to go to the bathroom a lot and my legs were swelling.” All normal signs of pregnancy, Rebecca’s doctor assured her.

The excited mother also had heart palpitations, high blood pressure, and was on the border line of having preeclampsia. Preeclampsia causes high blood pressure and typically happens in first-time mothers. She was diagnosed with gestational diabetes and was going to the doctor twice a week for non-stress tests. The tests are non-invasive and simply examine the fetal heart rate as well as any contractions that may be occurring. At thirty-seven weeks and six days, Rebecca went in for a non-stress test. “I had not slept all week. I was coughing a lot,” notes Rebecca. “They were going to give me cough syrup and an antibiotic because they thought I might have had bronchitis.”

But before the doctor decided to write out the prescription, a second opinion was offered. The second doctor advised a chest x-ray and an electrocardiogram of the heart (EKG). “They spotted pneumonia and they saw my heart was enlarged and failing,” Rebecca says. She was diagnosed with peripartum cardiomyopathy which is a rare occurrence of heart failure in the late stages of pregnancy. “The doctors then induced me at 6:40 p.m. on November 8th and within eight pushes, Victoria was here.”

Instead of staying on the labor and delivery floor where mothers and new babies rest, Rebecca was taken to the cardiovascular floor at Forsyth Hospital. “They brought her upstairs and about 3:30 that morning, I looked at my husband and said, ‘I can’t hold her because I’m so exhausted.” Within twelve hours of delivering Victoria, Rebecca went into cardio shock. “I don’t really remember the next couple of days. I was in and out of consciousness.” Rebecca’s heart was not pumping enough blood. A typical heart pumps 55-75 percent of blood to other organs. Rebecca’s, however, was pumping only 10 percent. Rebecca was given a 10 percent chance to live.

“The nurses made Victoria take a picture with me just in case I didn’t make it.” The doctors worked tirelessly trying to save the new mother. They put in an aortic balloon pump that was beating for Rebecca’s heart every other heart beat. Rebecca was then transferred to the vascular center at Wake Forest Baptist Hospital. The new mother was taken by ambulance while her new baby remained behind. There, Rebecca spent several days before the team of doctors decided she needed a left ventricular assist device (LVAD).

The device is used for patients who have reached the last stage of heart failure. It is implanted surgically in the left ventricle of the heart, which is the main chamber that pumps blood throughout the body. The hope was that the LVAD would help Rebecca’s heart to rest which would allow the muscle time to recuperate. Complications can follow. For instance, Rebecca’s lung collapsed during the procedure. One of the arteries in her in her neck burst from all the lines going in and out of her neck.

Nonetheless the doctors were able to address all of these issues. By the end, the LVAD worked. The new mother finally went home with her new baby. At home, Rebecca began to mentally struggle. “When I was first diagnosed with everything, it was hard to look at Victoria because I thought, ‘If I would not have had her, would this have happened?’ It was a lot of guilt.”

Rebecca was given antidepressants which she says has helped her a lot. “It has helped the guilty feelings and anxiety of almost dying because of the pregnancy. Everything happens for a reason. If I hadn’t gotten pregnant, we wouldn’t have found out I also had thyroid cancer or that heart issues run in my family.” That’s right. As if Rebecca did not have enough on her plate, she was also diagnosed with thyroid cancer and had her thyroid removed.

Rebecca’s twin brother has also been diagnosed with heart failure and thyroid cancer. He only got tested because of Rebecca. So she may have saved his life as well. As for Rebecca’s own heart, she was able to have the LVAD surgically removed after eight months. It has been two years and five months now since Victoria was born. Next week, Rebecca will go back to the doctor to make sure she is still cancer free. Rebecca’s heart is functioning on its own.

Rebecca is happy to talk about peripartum cardiomyopathy and her story so that, “…it might help others.” Rebecca says because of the thyroid issues, “I am tired the majority of the evening when I get home from work. Victoria has adapted and will play with me on the bed. It is hit and miss being able to physically do things,” admits Rebecca. But when talking about Victoria, Rebecca gushes about the joyful toddler she so adores. “Oh she is the most amazing little girl ever. She is two years old but acts like a teenager,” Rebecca laughs. “She is the most laid back little girl. She is smart and a stinker at the same time. She has only had two colds her whole life. She is always going with me to my clinic visits and so all the doctors and nurses know her.”

While Rebecca has been able to help save her twin brother’s life because of her circumstances, it was Victoria who saved her mom. Our neighbor would not have known about her physical heart conditions, if she had not delivered a part of her loving heart to her daughter, Victoria.