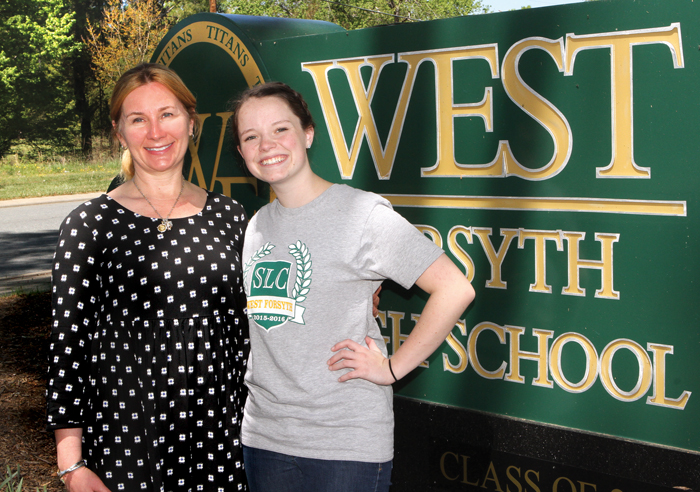 West Forsyth High School art student Kayla Morrison has earned national recognition in the Scholastic Art and Writing Awards of 2016. Kayla has been identified by a panel of creative professionals as a talented young artist in the nation. This year, nearly 320,000 works of art and writing were submitted. Only the top one percent were recognized at the national level. Kayla has been invited to attend a ceremony at Carnegie Hall on June 2.

Kayla’s painting, “Cielo,” is based off a collage of photos of children from her mission trip to the Dominican Republic, as well as an old church she found in a North Carolina magazine. The cross atop of the church is from the church in the town of Cielo.

“These children made a huge impact on my life and really taught me how to love and accept someone so easily even with cultural and language barriers. Given these lessons they taught me, I knew they deserved to be in a safer environment and that’s why I chose to paint them in front of the serene church and green fields. This also gave me a chance to combine a piece of my home with theirs,” Kayla wrote in her artist’s statement.

Kayla’s painting won a regional gold key for competition in eastern and central North Carolina at Barton College. Her work then was sent for national competition in New York. The nonprofit Alliance for Young Artists & Writers announced the national award recipients of the 2016 Scholastic Art & Writing Awards, the nation’s longest-running and most prestigious recognition program for creative teens in grades 7–12. The Alliance also partners with art institutes, colleges, and universities to earmark scholarships for college-bound Scholastic Awards recipients.

Since the program’s founding in 1923, the Awards have fostered the creativity and talent of millions of students, including renowned alumni who have gone on to become leaders in their fields, including Andy Warhol, Truman Capote, Richard Avedon, Philip Pearlstein, and Sylvia Plath. More recently, Stephen King, Richard Linklater, Zac Posen, and Lena Dunham received Scholastic Art & Writing Awards when they were teens.