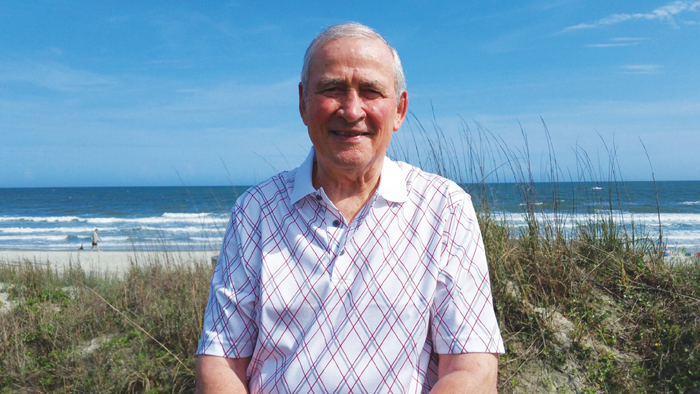 When one speaks with Jim Israel, the first topic to come up might just be Jim’s wife, Brenda, and his two children and four grandchildren. However, Jim is also likely to reminisce about his upbringing. For instance, he grew up in a military family, something that would influence his future decisions. His dad retired as a colonel and was the command chaplain based out of St. Louis, Missouri. “He was responsible for worship services in the Air Force,” recalls Jim. Jim’s brother, Ray, retired as a two-star general.

Growing up in a military family, it was only natural for Jim to join the ROTC program at Wake Forest University. Jim also received a scholarship for baseball. He made the basketball team as well. His junior year at Wake, a new program was introduced — a flight aviation program for ROTC. Jim enrolled. “While everyone else was marching down at Fort Bragg during the summers, we were taking our flight physicals and flight training to qualify. I fell in love with flying at that point,” Jim admits.

Only four cadets graduated from the program and Jim was one of the four. Even though Jim was in the Army and his Dad was in the Air Force, Jim’s father received special permission to swear Jim into the Army. “Dad swore me into the Army, which is an honor I will always remember.” Jim was soon sent to Vietnam. “We called it graduate school. You graduated if you came back alive.”

There was a rule that only one family member could go to war at a time. “I remember Mom, Dad, and my other brothers and sisters talking about whether we should all three go.” In the end, the Israel family decided that Jim, his brother, and father should all go to Vietnam the same year instead of one going one year, another the next year, and so forth. During Jim’s first tour, there were 94 cadets in his class. Of those, 64 were either wounded or killed. Jim was shot down on four different occasions.

After one of them, Jim found himself in a U.S. military hospital recovering from wounds he had sustained in an attack. On that day, Jim was surprised to find Jimmie Willie wheeled into the bed right beside him. The familiar face belonged to his best friend from high school. They had won state championships together in high school but had fallen out of touch over the years. “We were both shot down on the same day and were taken to same hospital,” Jim says with amazement at the coincidence. “We couldn’t believe it.” It is easy to imagine that the catching up they did helped pass the time in the hospital.

Jim also spent Christmas in Vietnam. He was able to go off base and see his father who was in Saigon then. His father had arranged for Americans to sing Christmas songs with another Vietnamese church. “I can remember all the members from the Vietnamese church getting off their bus and wearing their white robes.” We would hear a song in English and then a song in Vietnamese.” It was a time and tradition he relished while he was serving his country on foreign soil. In particular, Jim appreciated being with his father. Jim notes, “If there is anyone I would like to be like, it would be Dad.”

During one of the four times Jim was shot down, he learned more about his father. Chaplain Israel was given presidential order that left him in charge of fifteen other chaplains. “When the POW’s came back from Vietnam, Dad would assign an x-number of POW’s to various chaplains. Before the POW’s would come to him, Dad would call his family back home to see if they were Catholic, Protestant, or Baptist or whatever. He would find out if their wives had remarried — or what they would be coming home to. Because of my dad, all those POW’s he was responsible for — he made sure these guys got promotions, back pay, and all the savings they lost. Dad was a true American Vietnam hero.”

Once Jim completed his two tours, he came back home and flew for Integon Life Insurance Corporation. During his time there, he received a phone call he would never forget. Governor Hunt, who was Governor of North Carolina at the time, called the Integon offices asking specifically for Jim. Jim took the call. Governor Hunt told Jim about Major Peters, a POW of the Vietnam War who needed to be picked up from Georgia. Major Peters said he would only fly home if Jim was his pilot.

“I had no idea who Major Peters was,” Jim laughs. “But I agreed to do it.” The passengers on the flight down to Georgia to meet Major Peters included the Governor, a couple of Congressional members, the Mayor, and the family of Major Peters. Once Jim landed in Georgia, the family members and politicians disembarked from the airplane and went down to greet Major Peters. Major Peters came running out to meet his family and hugged them. Jim, who was standing at the top of the steps in the doorway of the plane then saw something he says he will never forget. “The Governor and the Mayor were all reaching out their hand to shake Major Peters’ hand. But he ran past them and up the stairs to see me with tears coming down his face. He hugs me and asked, ‘You are Jim Israel aren’t you? I want you to know your dad just saved my life.”

Jim’s dad had counseled Major Peters. Jim retired from the Army after 24 years. He retired because he said the further up in rank one goes, the less time one spends flying and more time he spends as an instructor. But Jim wanted to fly. Thus, he joined Piedmont Airlines. Interestingly, during his training for Piedmont, Jim found one pilot sitting next to him who was from Vietnam. It turned out that Jim’s new Vietnam friend said he had sung with Americans during Christmas. He was at the church where Jim’s father was the chaplain and had arranged for the Vietnamese church to sing with Americans.

“I don’t know how you can’t say God doesn’t have a hand in that.” Jim says what he enjoys the most about flying is the feeling he gets when he breaks through the clouds. “You are on top of it and see the heavens above and the earth below. I feel closer to heaven. God made all this and here I am flying people from point A to point B. I used that opportunity to witness to people,” says Jim. “I feel like God gives us gifts to use. I loved flying, but when I retired, I was able to go on mission trips. I went to Jordan and taught children to play baseball who had never even seen a baseball. And we got girls involved. In their world, that’s not heard of. I did mission work in Turkey and played basketball in Morocco.”

Jim says he enjoys the times with his grandkids and will share his stories about war now, something that wasn’t always easy to do. “When you are in a war situation, it takes you a while to where you want to talk about it. I still have nightmares. In some ways, the second tour was the worst because you think, ‘I have to go through this again?’ You miss two years of family life and your kids growing up.”

But Jim is not missing out anymore. He sees his family often. Our neighbor who sacrificed his time and risked his life certainly deserves a thank you from all of us, as does all of his family.