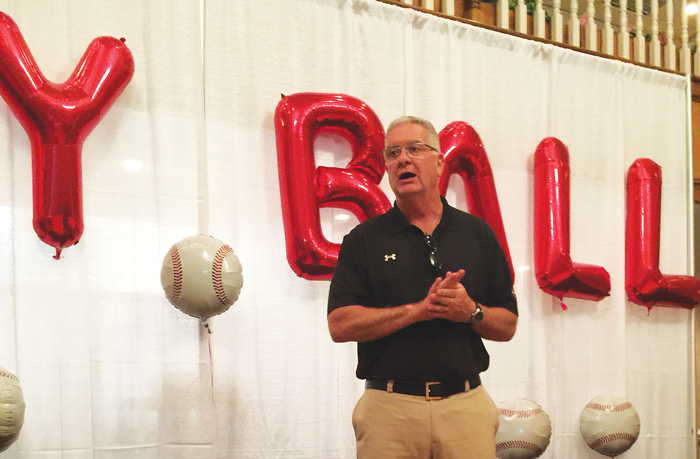 Talk about the red carpet treatment …

Southwest Athletics Sports League pulled out all the stops last week as national and state leaders of the Babe Ruth League toured Clemmons as they consider a bid for the 2017 Babe Ruth World Series.

Robert Faherty, vice president of the national commission for the Babe Ruth League, took a whirlwind tour of the Southwest baseball facilities, the Clemmons Medical Center, Tanglewood Park and finally, the Village Inn and Event Center, where he dined with Mayor Nick Nelson and the entire village council, the Southwest boards and coaches and various business and civic leaders.

“We’re not bidding you off against anybody else. We’re trying to make sure the community knows what we expect. I’m holding it open for Clemmons,” he said, adding that the designation for the World Series would not be a one-time thing. “We want to do business over and over.”

The Village Inn owner Dana Lu Bryson had festooned the hotel with baseball paraphernalia including a large “PLAY BALL” display that Faherty could not miss.

Southwest broke its long association with Little League last year to join the Babe Ruth baseball organization. Faherty said the economic impact to hotels and restaurants could be huge. Southwest Athletics would also receive a guaranteed $45,000 for serving as host.

He predicted Southwest’s team could be a contender in the World Series. “We know the level of baseball you play here.”