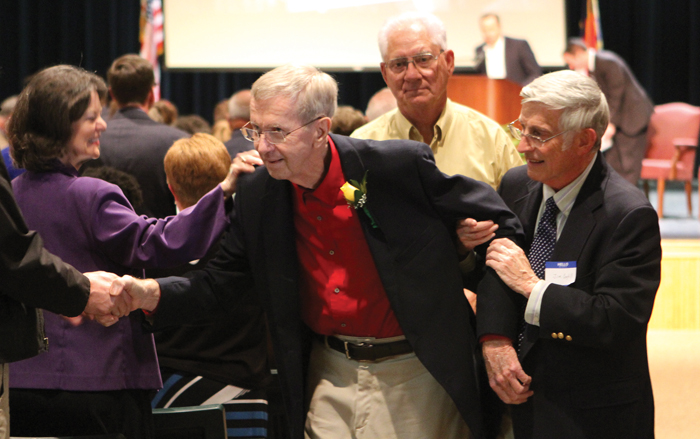 A frail Jim Anderson greets friends at the dedication Sunday. He is supported by old teaching friend Jim Coghill at right and followed by brother-in-law Mickel Barnette of Mocksville.

When Lori Goins Clark asked those in the nearly full auditorium what Jim Anderson said when a student didn’t do as expected, the words rang from all corners of the room. “We are not amused.”

Anderson, of Mocksville, was amused Sunday as the West Forsyth High School auditorium was dedicated as the Anderson Performing Arts Center. Former students, family members and friends crowded to pay their respects to Anderson, who spent 39 years teaching English, music, manners and life lessons — 31 of those years at West Forsyth.

Cindy Gray Clawson, a member of the Class of 1978, recalls Anderson recruiting her to be in one of the musicals. “Mr. Anderson wanted everyone to do whatever character they wanted to do in the musicals. I became a music teacher because of Mr. Anderson.” She wasn’t the only former student who went on to a career on stage, or in arts education. Anderson could be strict, Clark said, but students loved him, especially his excitement for learning and for their future. She majored in music in college. Now a member of the Forsyth County Board of Education, Clark called Anderson a “great man.” “He provided the example of an educator who loves teaching.”

Former West Principal Jerry Peoples said that Anderson made his job much easier. He looked at his friend and said: “What a wonderful honor to have your students care enough about you to do this.” And those graduations. “I think perfection is the best word. He would worry you to death to make sure everything was perfect.” He went as far as to coach the assistant principals on the proper pronunciation of students’ names as they walked across the graduation stage. “Jim was every principal’s ideal of a good teacher. Nothing you could ask him to do, and he would do it well. Jim was invaluable to me … a good friend. “Jim, we are amused today. We are very happy for you,” Peoples said.

Linda Early, RJR Class of ‘65, remembers Anderson’s phrase “cursives and assorted blasphemies.” “We read Macbeth aloud in class,” she said. Four years later, Anderson brought his high school students to watch her play the lead role in a Wake Forest University production of the Shakespeare play. Her son also went into the theater because of Anderson’s influence. “You are the wind beneath the wings of thousands and thousands of people,” she said.

“Mr. Anderson has been the inspiration for thousands of young minds,” said David Joy, Class of ‘96. At his urging, he joined the chorus at age 15. “Little did I know how my life would be incredibly impacted by my chorus teacher. There was no other outlet for young performers here. This was it.” The experience was the highlight of his high school years. “Jim was a task master. Excellence was expected. He was a teacher, a mentor and a champion, and he is still our champion today,” Joy said.

“He’s still the king,” said John Rushton, who said Anderson is passionate, loyal and dedicated to doing the right thing.”

Nephew Greg Barnette and niece, Sabrina Conrad, know Anderson as “Uncle Jim,” a vital part of helping them raise their own children. “Uncle Jim, this is all about you,” Barnette said.

“We’ve got this whole generation of folks who love Uncle Jim,” Conrad said.

The dedication included the group singing “Camelot,” one of Anderson’s favorites. The APAC – as the Anderson Performing Arts Center is being called – was named after Anderson much because of the effort of Terry Hicks (who played piano during the dedication) and steering committee members Lori Goins Clark, Jim Coghill, David Joy, Greg Taylor, Wrenn Conrad, Judy Willard, Cameron Willard, Pat Spainhour and John Rushton.