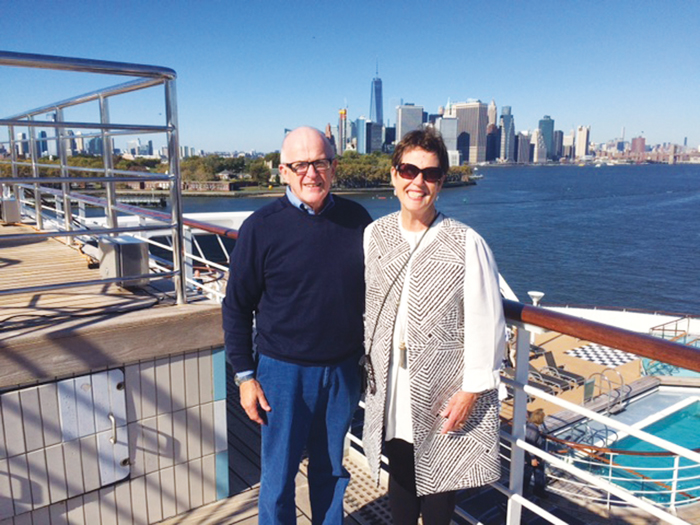 It is 1969 in San Francisco, California. The Giants were in their twelfth season since moving from New York. In what would seem like a goodwill gesture of atonement, the Rolling Stones offered a free concert in San Francisco after being criticized for charging too much for a country-wide tour. In contrast to the disturbing news broadcast on the Vietnam war, it seemed to be the summer of love in the fair city of San Franscisco. In fact, nearly 75,000 young people were drawn to San Francisco to marry themselves to other Utopian-minded folks. Among those neighbors was Camille Abbott. “I was footloose and fancy free. Half of my generation was in Woodstock and half were in Vietnam,” recalls Camille. Eventually, the carefree-spirited Camille decided she had her fill of California and was ready for new adventures. So she packed up her suitcase and moved to Europe.

“I didn’t speak a foreign language,” Camille says. “So I went to London. I went to Yorkshire to a town called Hartlepool.” There, Camille stayed with a librarian. The librarian thought it might be helpful for Camille to meet and make friends with Ann Stevenson, another young girl who worked at the library.

Ann invited Camille out to meet some other friends. “Out of this yellow Renault, stepped out this really good looking guy,” Camille recollects. Camille learned the boy’s name was Doug. “After many pints of beer, I asked Doug if he had ever been to Scotland,” giggles Camille. It wasn’t long before the two were off, traveling to Scotland together. After that, the pair ventured on to Ireland. The traveling was amazing, but their time was all too short. It was time for Camille to go home.

There were no phone calls between the two because overseas phone calls were too expensive. However, they wrote letters. Love letter after love letter sailed across the sea to and from one another. “Our entire courtship was conducted through letters,” says Camille. “In those letters, we realized we had many things in common. We had the same values. He was totally unchurched, but marriage is what we wanted. We wanted marriage until one of us died.” Doug decided to come to California to see his American love. He arrived in the summer and the two were married by the following December.

Like many newlyweds, the couple was very poor and very in love. As a furniture designer, Doug searched for a job. He eventually found one in Los Angeles. Doug went to work while Camille had baby after baby. Doug came home every night and helped Camille with their five children (four girls and one boy).

“We didn’t even think about it,” Camille says about those years with all those diapers and the many sleepless nights. “I thought, ‘We are in this.’ It was just one day at a time.” Camille admits she is very organized and very Catholic, which Doug converted to. Camille says is a person who has a lot of energy. Nonetheless, by the time the fourth and fifth child came along, Camille felt as if she was running on empty. “I had some girls and nannies come help. They were a gift from God.”

Doug and Camille loved raising their family in California, but after being stuck in two-hour, bumper-to-bumper traffic on a regular basis when they ventured away from their home, the young couple knew a change in location was necessary. “We knew no one in North Carolina, but it was a furniture center.” Since Doug was in the furniture industry, it only made sense to move the family to the east coast. “We found a house. We found a church. We found a school. All the children were born in California, but all the kids love North Carolina. I think God wanted us to be here.”

Presently, Doug plays the flute at Holy Family and Camille is very involved as well. Doug and Camille’s family of five children have grown and are now raising their own families. As a result, the two have redesigned their house so that it is always available for their grandchildren and children, welcoming the love and chaos that comes in big-family style.

After years of raising five children, surviving sleepless nights and hectic days, these two neighbors seemed to have also managed to stay very much in love. Perhaps it is because, along the way, they have been able to follow the instructions of Saint Benedict, one of the great founders of the contemplative monastic tradition. He said, “Listen and attend to the ear of the heart.”