Dan Barrett to walk for Congress 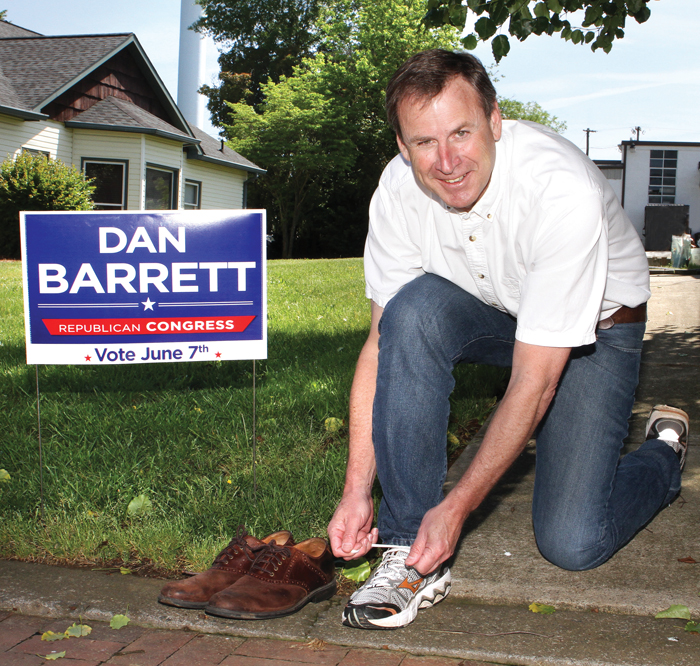 Dan Barrett laces up his walking shoes in preparation for a 100-mile trek across the 13th Congressional district from Iredell County across Guilford County.

He’s walking again, but only a mere hundred miles this time.

Clemmons attorney and Davie County commissioner Dan Barrett, a Republican candidate for U.S. Congress, has vowed to walk across the newly-mapped 13th district starting in Mooresville on Monday morning. He will eventually reach Mocksville before turning south to Cooleemee and Rowan County, turning east at Salisbury toward Davidson County. He plans to reach northeastern Guilford County by May 26.

“It’s been a great first day,” he said Monday morning at Korine’s Cafee between Mooresville and Troutman. He had stopped to talk to a veterans group among others.

“People are really frustrated with government and ready to turn the rascals out. This is the strongest sentiment I have seen with government broken,” he said. Barrett walked 600 miles across North Carolina in 2004 when he ran for governor.

“It’s only a hundred miles compared to 600,” he said Monday. “This should be nothing.” He narrowly avoided being crushed by a dump truck in the Cullasaja Gorge on US 64 near Highlands in his governor’s race.

“I almost got myself run over several times,” he recalled. “This one will be easier because we have flatter terrain. We’re going to stick to the state roads and go through the communities of the district.”

He tried to walk 15 miles a day when he ran for governor. “We’re going to take it a little easier,” Barrett said. “The candidate isn’t as young as he used to be. It’s the same concept — meeting people where they are, letting them get to know me and me get to know them.”