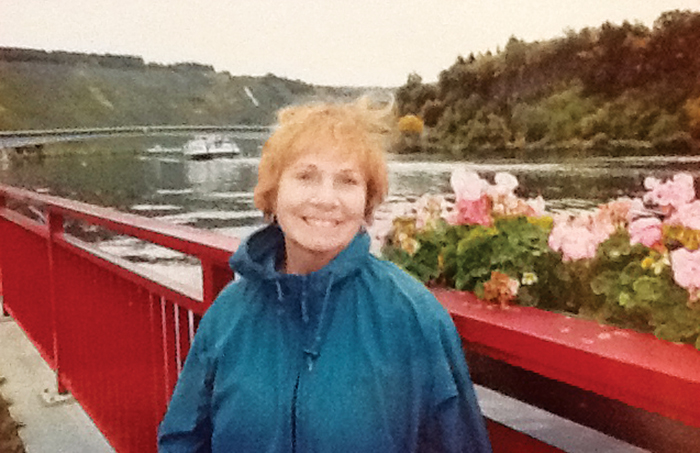 Lois Gerhardt, above, in a photo of her biking along Mosel River Germany in 2015

We all have pivotal moments in our young age that help shape who we are. For Lois Gerhardt, it occurred when she was seven. Her father died. Her mother had no choice but to send Lois and her sister to boarding school. Lois was the youngest of six. Her oldest sibling was eighteen. Lois’ mother had to work and the other children were more self-sufficient or working. The way Lois recalls her time at boarding school is almost similar to how Roald Dahl recalls his youth in his novel, “Boy.” It is tragic and touching. It is also witty.

About going to boarding school at seven years old, Lois admits, “It was very traumatic, scary and they had so many rules. Oh the rules.” Lois recalls the two types of girls who attended boarding school back then: The rich kids whose parents did not want them home; or the kids like Lois. “The rich kids tried to rule over us,” says Lois with a laugh. “The rich kids would get packages. One of them had a locker next to mine. She said, ‘Oh wow, I got this package of Tootsie Pops.’” Lois watched as the girl handed the candy out to the other rich girls. She did not give one to Lois. “So when the girl went outside, I took three-fourths of her Tootsie Pops and threw them in the trash. Later she accused me of eating them. I did not lie, I said, ‘No. I did not,’” Lois chuckles.

When Lois came home after half a semester, she was overwhelmingly glad to be home. She did not want to go back to school, even though the plan was for her to return. However, Lois’ mother became ill, so Lois stayed home. “My 18-year-old sister was really mad at my mom for sending us off, but she was working so she couldn’t watch us. I wasn’t mad. We had a lot of rules at school and I think it has shaped me to be more orderly. I also appreciated being home.” Lois’ mother never remarried. As a widow at 44, Lois’ mother continued to work. Lois recalls those times, “It was in the 50’s, and I don’t think there were many available men. The men died in the war or were married. There were more women than men.” Something else there was more of was money. Since Lois’ mother had gone back to work, she was collecting her pay stub and her husband’s Social Security stipend. “So it was fine. My mom and I were pretty close. Life worked out and we had a pretty normal life. They say if your spouse dies, in some respect, it is easier for you if you have children because you have to fly with it. She was very smart but not educated. She had 12 brothers and sisters. So she didn’t get a chance to go to school because she had to work to help her parents.”

As Lois grew up, she became an x-ray technician. It allowed her to pay her way through college at the University of Michigan where she met her husband. After the newlyweds married, they had two daughters. Once their girls began school, Lois began to teach. She loved reading Cheaper by the Dozen to her kids in class and required them to act out a scene from the book. Lois taught reading, English as a second language, and she also taught academically gifted students. But Lois grew tired of teaching because she always had to mind her P’ and Q’s making sure to please the principal and parents. As a result, Lois went back to being an x-ray technician.

Currently, Lois loves to write and her grandchildren keep her quite busy. For instance, Lois’ husband thought it was a great idea to take two of the their six grandchildren to England and Germany. If the trip went well, they would take another two of the grandchildren and so on. “It is so fun when you don’t take their parents because you don’t have the parents saying, ‘Don’t eat this, don’t eat that,’” Lois laughs. The grandparents and the two grandkids went for 10 days. They rented a flat in London which seemed almost the size of a dollhouse. “It was so odd. The kids slept on the couch. Their feet could touch the TV and their heads could touch the wall at the same time,” Lois giggles. “You could barely get out of the beds to go to the bathroom. But we made the most of it and that’s what makes a good trip. Stories like that. It was a success.”

Speaking of stories, Lois loves to write about her excursions. “I think if you have a story, it writes itself. Bill Bryson wrote, A Walk in the Woods. It’s not a travel log but more about his experience on the trail. You are laughing out loud because of his experiences. I write like him.” And should we not all laugh out loud about our experiences in this crazy journey called life? Our neighbor certainly thinks so. What a great attitude.