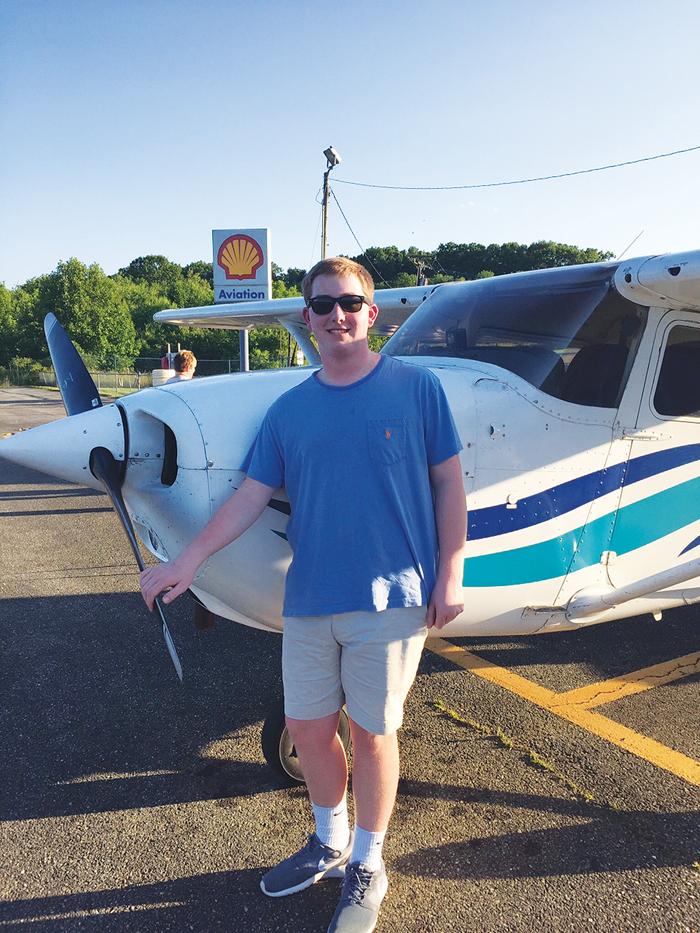 Matt McGuire, a sophomore at West Forsyth High, took his first solo flight in a Cesna 172 last week on his birthday.

It was in 2007 that Matt McGuire discovered his love of airplanes. He was seven at the time. The Winston-Salem Airshow was an airplane playground for many. But for Matt, it was an inspiration for his professional future.

Seven years later, in 2014, Matt began asked his third cousin, Dalton Everhart, about flying. Dalton flies glider airplanes. Glider airplanes are towed into the air with a power engine airplane and are released in the air. They glide without engines. They can climb with thermals, big pockets of air that rise. Glider planes can stay airborne anywhere from fifteen minutes to an hour and a half. When Matt expressed his interest in learning to fly the gliders, Dalton took Matt under his wing. Matt began to fly every weekend. Finally, after four months of training, Matt was told he was on his own.

As the old saying goes, “Success breeds success.” In Matt’s case, it wasn’t long before Matt realized he was ready to learn more. Matt found Ed Holland, an instructor who would teach him how to fly power engine planes. “Ed is, in my opinion, one of the best instructors out there. Dalton, too. Of course I am biased, but they really are. I’ve not once been in an airplane where they’ve hollered or raised their voice if you do something the slightest bit wrong. They are very two kind and humble people.”

Matt began his training in a Cesna 172. He buckled down and began training once a week in order to be able to take his first solo flight by his sixteenth birthday — which was just last week. “The most nerve-racking part was taxing to the runway,” admits Matt. “You don’t really do anything in the airplane when you taxi. I was just sitting there. But once I was in the air, I was flying the airplane. It felt natural to me then.”

Not only does flying come natural to Matt, but he says he loves the hum of the engine while observing the beautiful landscapes North Carolina has to offer. “I really like to see the scenery, especially where I fly up near Mount Airy.” Matt admits there is also a bit of an adrenaline rush that comes with flying. However, he says it makes becoming a pilot an attractive feature. “I always have to go into it as if I may have to land off field. I always have to fly with the expectation that my engine might quit. I always have to be on my toes. It’s a rush.”

Matt enjoys spending time with his family. While growing up, Matt and his two cousins, Alli and Quinn, have always stayed at their grandparents house after school. Ever since they were little, Joann and David Arrington have taken in their three grandchildren until a parent could pick up each child. Perhaps his hometown upbringing is why Matt is hoping to go to college nearby. “I would like to go to Wilmington since it is not too far away. Plus, I could probably fly and tow signs at the beach.”

Of course, Matt wants to continue his endeavors as a pilot. He plans to get his pilot’s license for gliders which allows him to take passengers up with him. When he is seventeen, he hopes to do the same for power engine planes. Whatever Matt plans to do, it seems the sky is the limit for this budding, young neighbor.