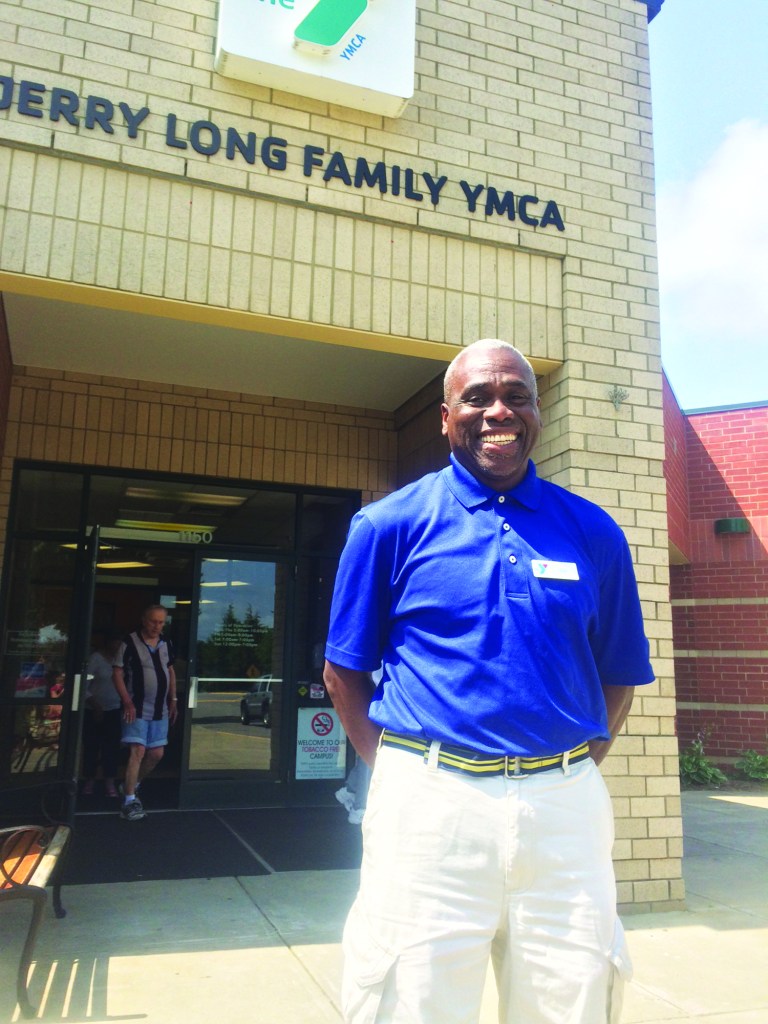 Carl Smalls has a friendly word for members arriving at the YMCA.

It seems everyone knows Carl. At the Jerry Long YMCA, Carl Smalls enthusiastically greets folks early in the morning as he scans their membership card.

“I made it again, Carl, early in the morning!”

These are some of the phrases YMCA patrons hear as they come into the Y and join the line that often forms as membership cards are scanned. The reason for the line is often because they take an extra minute or two to say hello to the guy greeting them with the effervescent smile.

“I am a believer. I think when you are a believer, you can’t be anything but positive and energetic,” Carl says. “When you are doing what you are supposed to be doing, you are happy. I think we are all servants and part of my role at the Y is serving. When you understand your mission, you will be put in the right position.” Although Carl has been asked to serve in other capacities, they just didn’t seem the right fit at that time. For instance, he was asked to be an usher in his church and turned it down because he did not feel that was his servant role.

In addition to his faith, Carl also acknowledges his parents played a huge role in forming who he is today, “My parents were not supposed to have kids. They were married for twenty-five years before they had their first child.” Not only did Carl’s parents have children, they had five. Carl is the youngest. “As my dad said, I am the last button on Gabriel’s coat.”

Since his parents expected their children would outlive them, Carl’s mom and dad were always telling their young ones to stick together. Carl’s Mom had ready examples, holding up her hand, “My mom used to say all the time, ‘This is the family. Each finger depends on each finger. If we all depend on each other, we will all be able to make it. Most likely, if you are having problems, it is the person in the mirror. If you take care of that person in the mirror, your problems will take care of yourself.’”

While Carl’s mother raised the children at home, Carl’s father worked diligently as a merchant selling clothes out of his car in order to take care of their brood. He taught Carl the fine art of being a salesman so that Carl could take over his position later. As a young boy, Carl listened intently. As a teenager, Carl learned the ropes. As a young man, Carl realized he wanted to go into finance, not sales.

Carl reflects on the progression of his relationship with his father, “As a guy, when you interact with your father, he becomes your father. Then, you progress to being a daddy. You are doing things together. Then the last phase is Pops. You call your dad, ‘Pops,’ and it is a way to say I appreciate everything you did and now I am going to show you. I wanted to show my Pops I would make him proud.” While Carl’s dad had put a lot of time into training Carl, Pops realized his young man was headed in a different direction and wished him well. “He could have retired earlier if I would have taken over,” says Carl.

Once Carl graduated school in Charlotte, he went from Charlotte to Georgia, from Georgia to Michigan. He worked with Ford Auto Company under Henry Ford’s son. “We called him Deuce since he was Henry Ford the second.” Not surprisingly, Carl soared at Ford. It was a time when he felt sure of himself, his talents, and his leadership abilities. However, there was one area that felt uncertain. His marriage.

“I got divorced early,” says Carl. “My boss said, ‘Just get remarried and start a new family.’” While his boss’ advice was well intentioned, it didn’t resonate with the guy Carl saw in the mirror every morning. Carl notes, “The main thing is you try as much as you can to maintain your family which means you make a lot of concessions.” One of the concessions Carl made was not remarrying so he could always put his son first. Another concession was traveling to his son every weekend despite all costs, despite a lack of social life, and despite long hours in the car. Traveling on the highways hour after hour from Michigan to Ohio, where his ex-wife and son were living, was tiring. Carl believes it was worth every minute. “Going home and seeing what my son was doing made me very happy. I could hear my mom and dad say, ‘Just do what is right.’ People can tell when you are doing what’s right.”

With his son in college, Carl realized he could begin to do the things he had put on hold. “I thought I wanted to have more kids. I don’t think I want to do that now. Perhaps I could remarry. I enjoy playing basketball. I enjoy doing that. Just things like working at the Y, I couldn’t have done that before. Just enjoying life, whatever that is.”

Part of enjoying life means also visiting his son. Carl’s son, who played basketball in college, enjoyed his father always making the effort to participate in his life. After one game, Carl’s son said, ‘Thanks for coming, Pops.’ Carl realized his son was now a young man. “I thought, ‘Wow,’ now I am ‘Pops,’” Carl’s son is with the University of Arkansas this summer, working as an intern and hoping to be a sports journalist. Of course, Carl is a proud Pops.

In addition to teaching his son, Carl continues to shape the young minds of the world. As a professor at Guilford Tech Community College, Carl is known to lock the doors when class starts and require everyone to take their hats off. Mixing in a dollop of humor with his teaching methods, Carl works to give his students the business and leadership skills necessary for them to meet their goals.

Whether Carl is spending time with his son, teaching at college, or greeting folks at the Y, Carl believes the basis of his efforts is grounded in the philosophy his parents passed along to him and his siblings. “What they pour in your life — you want to give it back. What you are saying is, I appreciate you and I want to show you.” In short, it would seem he is trying to do what is right, just as his parents instructed. He is sharing with his son and his community the talents and abilities his parents nurtured.