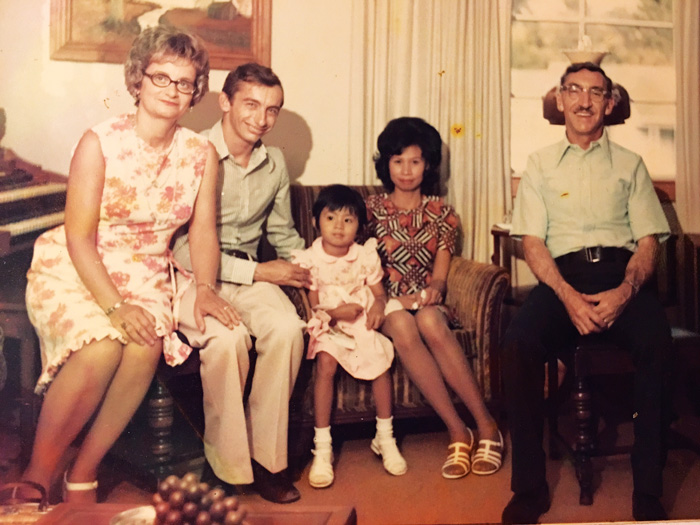 As a little girl, Anna Childress meets her grandparents for the first time in North Carolina.

Born in a rice patty village during the Vietnam War, Anna Childress was caught in the crossfire of war the day she was born. The village was Nakon Phanom, Changwat Provence which borders the Northeastern part of Thailand. It is separated from Laos by the Mekong River. However, due to its proximity to Laos and Cambodia, Anna’s village was caught in the crosshairs of war and was witness to several bombings and combat.

“Most of the men, including my uncles, were drafted into the Cambodian and Laotian army,” Anna recalls. “My biological father passed away in a freak car accident and my mother, seeking a better life for both of us, fled to Bangkok to find work at the US Air Base.” It was at the US Air Base that Anna’s mother met a US airman. The two were married. Then, in 1974, Anna, her mother, and new stepfather left Thailand as part of the US military withdrawal. “I still remember boarding the plane in what I thought was the largest and oddest thing I had ever seen.”

The new family started out with an initial visit to Asheville, N.C., Anna’s stepfather’s hometown. They met new relatives for the first time. “My childhood was a flurry of constant moving every two to three years.” Next, it was off to Cheyenne, Wyoming, where Anna began kindergarten. “My mother’s English was broken at best . . . and I only spoke Thai. At that time, the school system didn’t fully appreciate the value in multi-linguistics so off to speech therapy I went – which recommended we only spoke English in our home.” Anna attended speech lessons for five years, in addition to taking English as a Second Language (ESL) with Anna’s mom. Anna says, “…to help her learn English and banish any trace of my native Thai tongue.”

Moving from home to home, struggling to make new friends with each move, and trying to figure one’s place in the world along the way can be trying for most anyone at any age. For Anna, she was forced to move to lived in four different states (California, Texas, Wyoming, and Ohio) and four different countries (Thailand, England, Okinawa, Japan) — all before she was 17. To add to the mix, Anna was usually forced to move in the middle of a school year. “It was nothing to be plopped in a brand new school in brand new city or new country. For example, I attended four different high schools before I graduated. Minimizing the learning curve and assimilating quickly was the name of the game,” says Anna. “Every time we moved, I would get on my bike with a map and learn the lay of the land.”

“This is how ambition, perseverance, and tenacity navigated its way into my life early on.” Anna and her family could not afford the finer items in life. Subsequently, to earn money, Anna began her own paper route at the age of 10, delivering papers twice a week before school. She used the money to join the softball league in 5th grade. “Poor waste of money,” Anna jests, “I still can’t catch the ball in outfield.” While in Okinawa, military kids were offered full-time summer jobs for youth 11 years and older. “I did it every summer, using my earnings to buy my own clothes and for play money.”

As a child Anna, was able to acquire the mandatory tools to flourish. But with each move, she witnessed her mother’s struggles. “It wasn’t easy for my mother to transition into the Western culture. She continued to struggle communicating. I would make all her phone calls, compose all of her written correspondence, and read to her daily. She suffered from depression and lacked the self-confidence to embrace the new cultures.” As the oldest child, Anna says her “paramount responsibility” was to help her mom transition. Anna’s mother was entirely dependent on Anna’s stepfather. He provided transportation since Anna’s mother did not get a license until after Anna was 16. Her stepfather controlled the finances, the decisions on where to live, and why. Anna’s mother dutifully obeyed. “Often times, we walked to the local markets to shop. I always accompanied her to help carry groceries, help man my little brother and sister, and to communicate on her behalf. In typical Asian fashion, I fulfilled the eldest child’s legacy of dutifully taking on household chores and raising my brother and sister 8 and 10 years my junior.”

Upon reflection, Anna recognizes that language barrier is only one brick in the wall as she and her family worked to build a life here in America. “There’s the sociology of a new culture, indigenous ideals and perceptions, human dynamics, subtle nuances in body languages that can be so frustrating and intimidating. I loved it and voraciously explored as much as I could. Which is why I vacillated between empathizing and constantly feeling exasperated with my mother.”

Anna says she views the stages of her childhood differently in each stage of her adult life. “If you asked me to describe my childhood, initially in my early 20’s, I would say dysfunctional, struggle, constantly moving, traumatic, poor. Now I’m more likely to describe it just as dysfunctional as any other normal family,” Anna smiles. She also adds, “Poor in the material sense, yes, but also culturally enriching, survival training, and the culprit of my ambition, perseverance, and tenacity.”

Would Anna break the mold and break free of the life in which she was raised? Or would she continue to be a wild flower in the wind? Tune in next week.