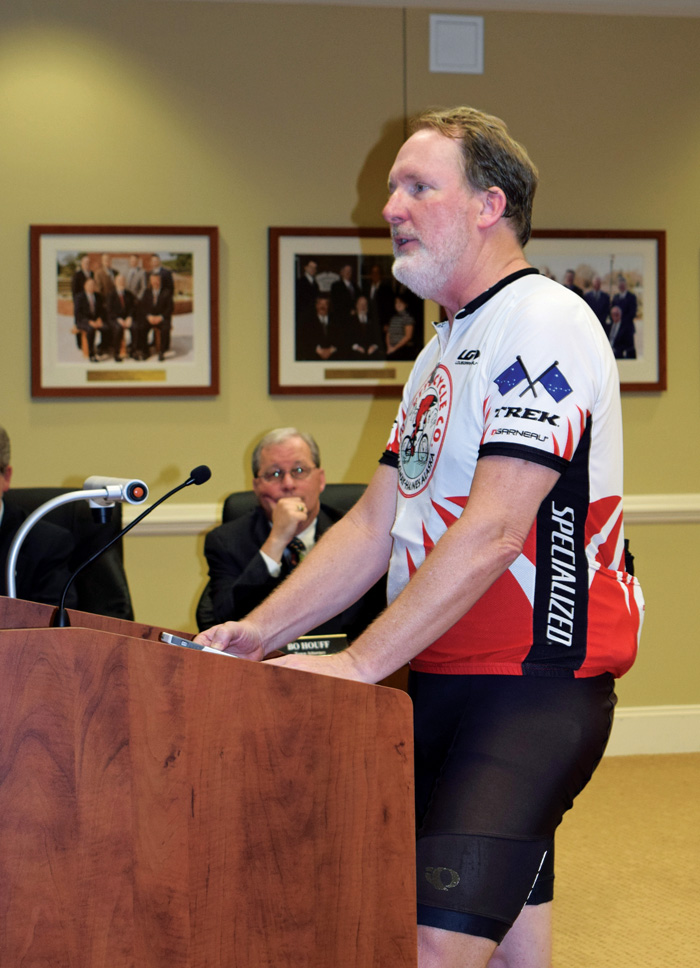 Lewisville’s hosting of several races associated with the USA Cycling National Champions this past May, drew praise at the June Town Council meeting.

“At a time when North Carolina is not being viewed in the most positive way, we were able to demonstrate a tremendous welcome to these visitors,” Hill said. She told the Council she had personally spoken to many of those in town for the event and heard only good things.

“They all seemed very grateful and impressed with our friendliness and willingness to accommodate the inconveniences the events caused,” she told the Council.

Hill, who served on a committee that helped to coordinate business participation in the event, said she was “awed and inspired” by the efforts of the para cyclist, many of whom were wounded warriors.

Steve Bissette, a physician with Lewisville Family Medicine, served as a medical volunteer for the races, and said this gave him an insight to the workings of the event. A serious bicyclist himself, Bissette said he was impressed by the courteousness of those involved with the event, and with the overall organization.

Fran Seehausen, an Arbor Run resident, hosted the Italian team riders in her home and said the entire experience was a very positive one. She thanked the Council for their willingness to open the community for the event, and said she felt it has been successful and well organized.

Ken Craven, a Lewisville resident, said he was speaking on behalf of himself and a group of cyclists that had been out riding just prior to the start of the Council meeting. “Many of these riders aren’t from Lewisville, but they feel it’s their community as well because they spend at least four hours a week here,” Craven said. He added that they were all pleased with the event and felt it was a positive experience for all concerned.”

Those speaking before Council also encouraged the town to make this a recurring event. “I, as well as the businesses who helped coordinate local participation, strongly support doing this event again with improvements based on the lessons learned this year,” Hill said.

The event had been expected to bring well over 1,000 participants, support staff and spectators to Lewisville.

There were complaints prior to the races and during the event from some residents upset about increased traffic, street closing and traffic rerouting. There were a small number of businesses owners concerned about losing business due to the impact of the races, but no one in attendance at the Council meeting raised any issues of concern.

Those who addressed council felt the importance of an event of this caliber, bringing large numbers of visitors to town, far outweighed any inconveniences.