West Forsyth grad Marie Carroll is off to Harvard 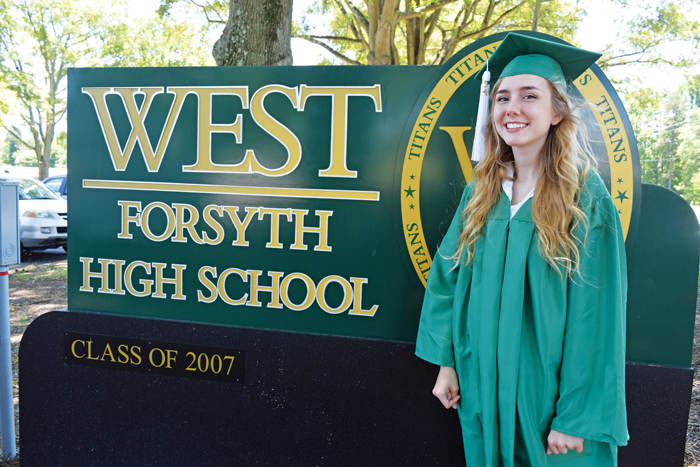 Marie Carroll isn’t sure which academic pathway she will ultimately pursue — economics, Asian studies, history and science — but whatever it is, it will undoubtedly involve traveling and exploring the world.

The West Forsyth graduate applied to some 22 colleges, not knowing exactly what she wanted to do. “I expected that I would be going to UNC Chapel Hill, but I was interested in other schools. I just didn’t want to fall in love with a college and then be disappointed when I wasn’t accepted.”

There is no disappointment ahead for Carroll, who graduated sixth in her class and will soon be heading off to Harvard.

“I’m very excited about being accepted,” she said. “I had a great educational experience at West, but I know there will be students at Harvard who attended prep schools and have had different opportunities. I know it will be very competitive, and while I prefer collaboration over competition, I believe that opportunity exists there as well.”

She is already exploring the world of Harvard through a Facebook page where she has the been able to talk with others who also are headed there in the fall. “I think there is a perception that it will be very elitist, but so far everyone has been down to earth and friendly and I’m looking forward to getting there and meeting people.”

Carroll said she knows there will be big challenges ahead, but she said she’s more than ready. In fact, she’s already thinking ahead to the four-year master’s program Harvard offers, and then would like to see herself in a Ph.D. program.

“Ultimately, I want to be traveling and exploring the world,” Carroll said. “After all, I still live in the same house where I grew up.”

She did, however, spend two months in Korea one summer and said she loved immersing herself in another culture. “I lived with a host family and took classes, and I also had a chance to study the Korean language while there.” Her class schedule back here has included taking Japanese and having a chance to use these language skills is also an exciting prospect.

Carroll credits her parents for getting her started on the right track academically. “They taught me to read at an early age and I love books. The library is one of my favorite places.”

She also played the cello in the school orchestra, making All County this past year and being a member of the Music Honor Society.

While she said her musicals skills are not such that she will be playing at the collegiate level at Harvard, she would be interested in other opportunities to continue to play. “I love the cello and hope to I’ll be able to continue to play in some way.”

Academics and music, haven’t been her only interests at West. Carroll also played on the women’s field hockey team for four years and the lacrosse team for two. “I attended a field hockey camp when I was in middle school at Wake Forest. I was attracted to the sport because it was something different. I guess that was its appeal. It’s also very physical, like soccer. I played mid-field and they say you can run up to five miles a game in that position.”

Carroll said while sports was an escape from the demands of her class schedule, it also provided learning opportunities. “You learn team building and the importance of working together.” As to what she will miss most about West, the Harvard-bound student said it would be the teachers. “West has some very good teachers who are passionate about their subjects and really care about the students. That’s something I will remember.”

Carroll is the daughter of Jana and Mark Carroll of Clemmons.