‘Ellington Fan Club’ went to all of granddaughter’s games 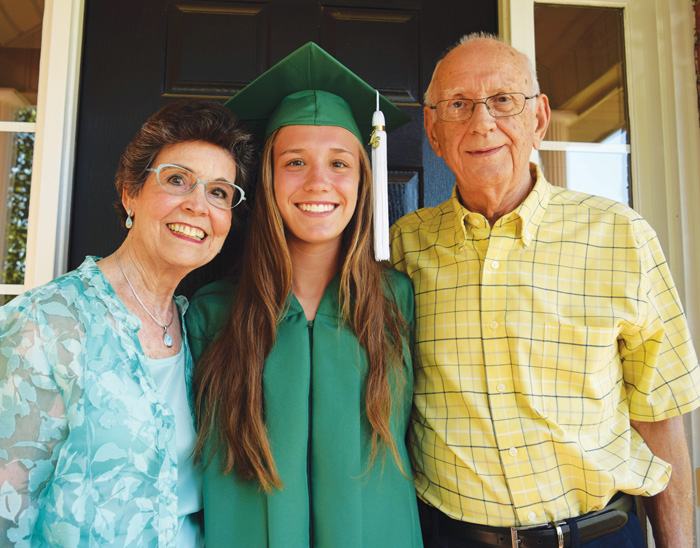 For West Forsyth soccer standout, Kathleen Moore, graduation last week was an exciting next step. But for the coach and her fellow teammates left behind, it was more than the loss of a single player. It’s also the loss the Ellington fan club.

“We haven’t missed a single game,” said Moore’s grandparents, Allen and Billie Jean Ellington. “Most of the games are local, but we’ve traveled to Raleigh and Charlotte when they’ve played there as well,” Allen Ellington said, and Billie Jean reminded him that she always wears her lucky outfit.

“It’s not green,” she adds, “it’s a yellow sports suit that I’ve had for probably 20 years, but it’s my good luck outfit.”

As the team’s unofficial mascots, the Ellingtons are quick to share the fact that the varsity soccer team has been conference champs for six years running, and that Kathleen joined the varsity as a freshman and played for the Titans all four years. “For the graduating seniors, that adds up to an undefeated record of 46 wins and no losses.”

Not only are the Ellingtons at every game, Allen also makes sure the team members have a nice supply of game photos. He is a familiar face at the Clemmons Courier, purchasing all of the photos taken by Sports Editor Chris Mackie and then sharing them with Kathleen’s teammates. “We have a Rouge’s Gallery on our refrigerator,” Allen said. “It’s what we call our collection of photos of all of the soccer team members.”

The Ellingtons have always had a close relationship with their grandchildren, often stepping in to take over the full-time care when the demands of life in the military made that necessary. “We moved up here to Clemmons after we retired, and drove Kathleen to school and her practices,” Allen and Billie Jean explained.

It doesn’t take long to realize how proud the Ellingtons are of Kathleen’s achievements on the athletic field, but their pride also extends to her academic achievements. She graduated eighth in her class and is headed to UNC Chapel Hill in the fall.

“I’ve always been competitive and like setting goals for myself,” she said. “I’m pretty good at time management and I’m competitive enough to always want to do my best.”

With a senior schedule that include such classes as AP biology, literature, calculus and physics, along with a busy soccer schedule, being driven would necessarily be a keep to success.

“I’m excited about going off to college,” Kathleen added. “At this point, I’m thinking about business as a major, but I’m also taking classes in biology and environmental science because those also are of interest to me.”

Kathleen said she was drawn to the idea of studying business because of her love of math and her interest in traveling. “I’d like to be involved in international business if I stay with that field.”

She also loves science and said a career in some field of science is appealing, but the travel aspects of international travel put that at the top of her list.

Her top choices for college were Vanderbilt and Carolina, and while she won’t be playing intercollegiate soccer for the Tarheels, she does plan to play club soccer.

“I’ve been playing soccer since I was around three or four, and while I played for West, I also played in the Elite Club National League,” she said. ECNL’s season began in August and ran up until it was time for the high school season to be started. “And there were times, if we advanced, one ran over into the other,” she added. Kathleen also played Twin City Soccer as a younger player. “I’m looking forward to playing, but not at such a competitive level for a change.”

Her athleticism as well as academic achievements come naturally to the daughter of a former All-American swimmer at West Point, who was there studying engineering. Kathleen’s mother, Jennifer Ellington, now a Lt. Col. in the Army Reserves, said her daughter was always well coordinated and also very fast. “She has a natural athletic ability and did a number of sports, including swimming and gymnastics before settling on soccer.”

That was at the age of seven.

Kathleen said she will miss West Forsyth – that she enjoyed the academics, the sports and the friendships – but is ready for a new challenge.

“I’ve been lucky to have been able to play a sport and I think it helped me academically. I like working toward something and the competition taught me to push through.”

She also wanted to take the opportunity to thank her parents and her grandparents. “They’ve done so much for me. I couldn’t have done all that I’ve managed to do without my grandparents be willing to be so involved, and I’m very grateful,” she said. “Along with my parents, they’ve made me who I am today.”