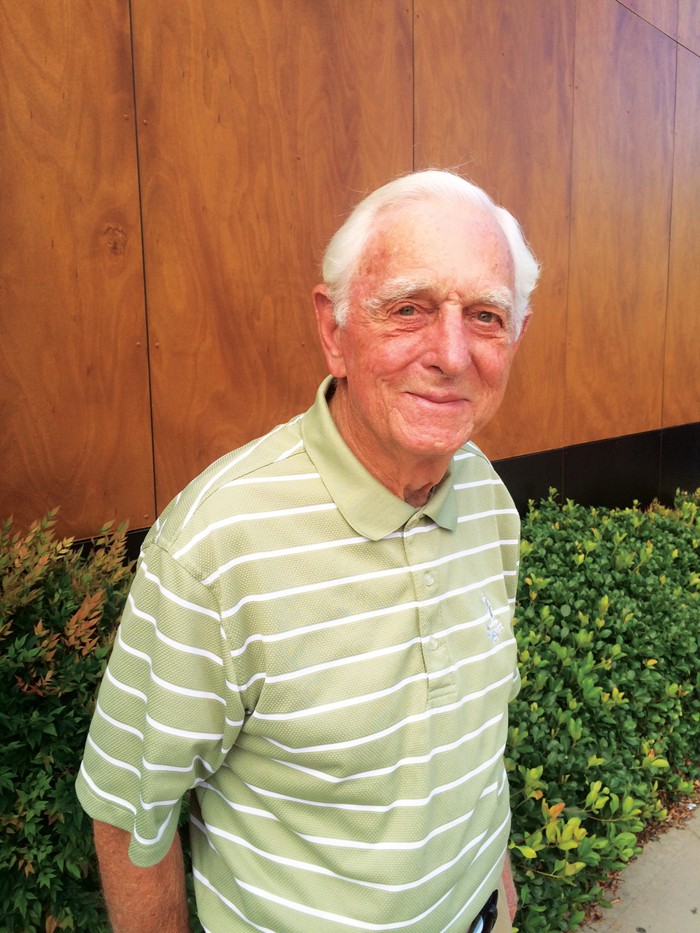 Whether it was fate or just good luck, Bobby Cheek came to Clemmons School at just about the perfect time. In the 1940’s, Clemmons School had classes for students in grades 7-12th grade. His freshman year, in 1948, Bobby tried out for the baseball team. Bobby, along with many other talented players, made the team. It turned out they were good picks, and won each game of their season. The crew from Clemmons went to the 1948 state championships and won that, too. Little did they know that they were on a winning streak that would last more than a year. When they went to the state championships again in 1949, they won again. In 1950, they were able to pull off another state championship.

“The grand part is the national commissioner chose us to represent North Carolina in 1949 when they had their southeastern baseball tournament. It was played out in Tennessee,” recalls Bobby. “The first team we met in Bristol, Tennessee, was St. Xavier from Kentucky. They had 2,500 students. We had only 125 students.” The newspapers were fascinated by the winning team who didn’t seem to be hindered by the small number of students at the Clemmons School. In 1950, the team was chosen to play in Tuscola, Alabama. “We all had never really been out of the state before these tournaments,” Bobby remembers.

Clemmons baseball had become quite the spectator’s sport. In fact, Neal Reynolds, a member of the Reynolds family, lived at Tanglewood Manor and was a also fan. “After we won the second state championship, Neal Reynolds said he would build us a lighted field. He would pay half if the community raised the other half. The cost was $30,000 to build it, and he paid $15,000.” Another spectator in the crowd, brought his daughter to the games. Bobby began to notice the girl. Her name was Patsy. The two started dating once she was in high school since Bobby was two years older. Bobby promised Patsy he would marry her once she graduated.

After graduation, Bobby was immediately drafted in the Korean War. He went to training camp. But in December of Patsy’s senior year, Bobby fulfilled his promise and put a ring on his high school sweetheart’s finger. In the meantime, Bobby was also preparing to be shipped out. However, ten days before deployment, the war ended. Bobby was told he had four days of leave. It was August. Bobby told Patsy if she could put a wedding on during the time he would be on leave, he would try to make it there and back to his next post within those four days. She eagerly agreed.

Bobby went to the bus stop bright and early on the first day of leave, but the bus was not leaving for another seven hours. He was worried he would miss the wedding. So he and his buddy began to hitch rides. On the side of the road with a 100-pound duffel bags slung over their shoulders, Bobby and his friend tried to find a ride. “A flatbed truck stopped and we threw our bags in the back. He was running 15 miles per hour. I told my friend, ‘we won’t get there if we only go 15 miles per hour,’” laughs Bobby. So the young men jumped off at the next stop and began thumbing for rides once more.

The next car that stopped was a brand new 1953 Oldsmobile. “We started down the road and the driver said, ‘Do you all mind speeding? I just got this car and I want to see how it runs.’” Between Columbia and Rock Hill, South Carolina, there was a road that went up and down like a roller coaster. Remembering the trek, Bobby says, “When he would get to the top of a hill he was going 100 and down at the bottom it was 120. We got the slowest ride we ever had and the fastest ride we ever had. So we ended up beating the bus.” Needless to say, he made the wedding.

Once Bobby fulfilled his required service, he came home and became a TV technician for Sears. He and his wife Patsy had three children. Bobby seems amazed when he describes his family, “Would you believe we had what we wanted each time? Two boys and a girl.” Bobby worked up the ranks, managing other employees. He worked hard so his wife could stay at home. “Everything we did, we did it together. We made every decision together. We tried to teach that to our kids. She did more raising than I did, but I have to say I am proud of my kids.”

Bobby was also extremely active in the Civic Club in Clemmons, which was almost something of a city council before Clemmons became incorporated. He was a charter member of the Jaycees organization. As a doting brother, Bobby also took care of his sister near the end of her life. She had cerebral palsy. About her early years, Bobby says, “Her mind was good, but back then, people like her weren’t sent to school because she couldn’t walk. The doctor told mom she wouldn’t live to be 10, but she lived to be 65.”

To this day, Bobby remains active in the community and is still a jack-of-all trades when it comes to helping folks. Just like in baseball, our neighbor remains a team player.