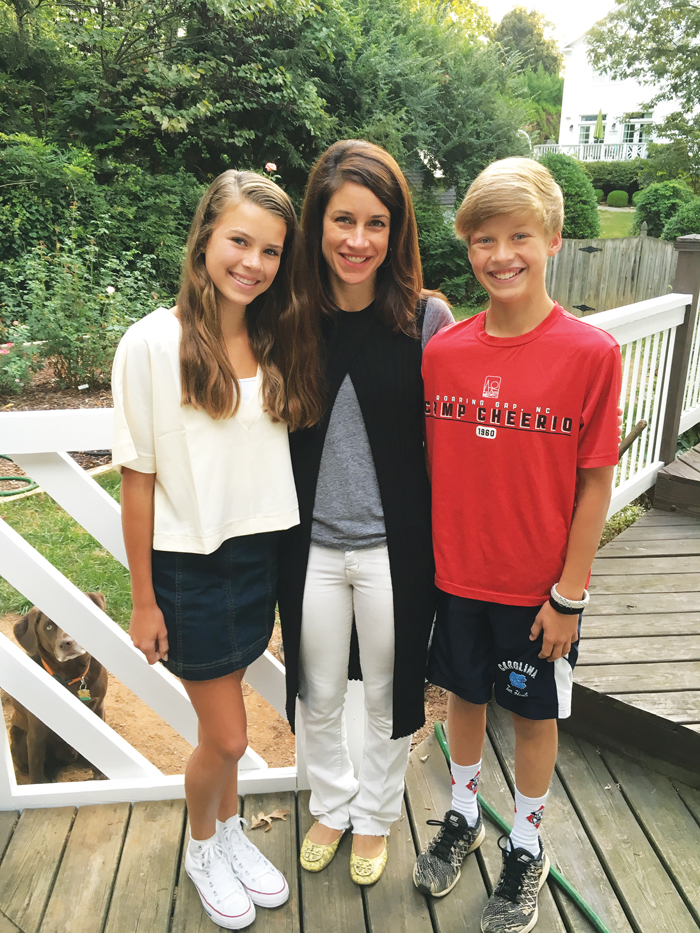 Cindy Kluttz is picture with her daughter, Lynn, and son, Robert.

“It was safe to ride your bike to the pool and come back home when the street lights were on,” says Cindy Kluttz. “I think people who grow up in larger cities don’t have that freedom. The Clemmons West community fostered independence at a young age.” Cindy grew up in the Clemmons West neighborhood with her mom, Sherry Claassen, dad, Stu Claassen and younger sister, Amy Geer. She went to kindergarten at Clemmons Elementary, swam on the neighborhood swim team, and loved to bounce around in gymnastics. As little girls do, Cindy continued to grow and soon began her freshman year at West Forsyth High School.

“West was amazing. I loved the combo of being on the West campus and being able to meet people from all over the city at the career center,” notes Cindy. “I loved the teachers. They really cared about us as students — both inside the classroom and out. It made it a memorable experience. My principal, Jerry Peoples, knew my name which was impressive in a big school.” Like many students in high school, the most exciting part for Cindy was not in the classroom. “I think my fondest memories are football and basketball games, and Friday night lights. It was so fun,” she reminisces.

On Friday nights, one could find Cindy on the field and court as a cheerleader. “I think cheerleading was a way for me to get involved in some way.” In April of Cindy’s senior year, she heard the University of North Carolina at Chapel Hill was having tryouts for their cheerleading squad. She went to tryouts and made the team. Cindy had also received the Teacher Fellow Scholarship at Chapel Hill and was on her way to learning about the importance of education in the younger classrooms. About cheering Cindy says, “West and Chapel Hill are both big schools. But if you are a part of something it makes the campus smaller. It also gave me an identity.”

While it was mentally and physically challenging, Cindy enjoyed the perks. “We got to sit on the floor of Dean Dome for a game. I think it is more special for me now than it was then. I think I took it for granted a little bit.” But Cindy’s cheerleading career was cut short after a fall one day. She was dropped at practice and twisted an ankle. She had to be on crutches for three weeks. Maneuvering on campus with crutches proved to be a challenge. Cindy had some time to think about whether or not she wanted to rejoin the cheerleading squad. “I remember calling my mother and her asking, ‘Are you upset you can’t cheer?’ And I said, ‘I am kind of relieved.’ I realized there were other options in college.”

Majoring in education meant Cindy was required to spend time as a student teacher in the classroom. “I think it would have been difficult to teach and cheer.” Cindy had decided to get a degree in education because she knew family would always be an important factor in her life and “…getting on the same schedule as my kids was appealing, but child development, and how we educate children to be future leaders was also very intriguing to me.”

In addition to student teaching, Cindy also applied for a job at Carolina Brewery. “I think everyone should work in the service industry. It is gratifying and trying at the same time to serve people. I think having a job in college helped me appreciate the rewards of having a good work ethic.” Every Thursday night, a co-worker caught Cindy’s eye. Bob Kluttz was from Winston-Salem too and had attended Summit, but the two never knew each other as kids. The co-workers hit it off and have been together ever since. Upon graduation, Cindy received her masters in education at the University of Virginia in Charlottesville, Virginia and then came home with Bob to raise a family.

She taught for one year at Whitaker Elementary and was asked to work at Forsyth Country Day (FCD). Cindy was at FCD for ten years with her two children along side her, Lynn and Robert. “Once you have kids, they are your everything.” So when Cindy made the transition to Summit, her kids naturally came as well. “Summit is such a strong community. It’s that community that I’m drawn to. And what I realize as my kids grow is that I need a village. Summit is such a strong village.”

Cindy is one of the leaders of that village. She is the Director of Admissions. It is a position Cindy never thought she would hold. Behind a desk teaching is where Cindy had thought she would be over the course of the years. But that was not her fate. “It happened naturally because I love people and I love to hear about peoples’ families. It’s nothing I aspired to but it’s a natural fit for me. I think sometimes you work hard at your job and people put you in positions that make sense.”

Like everyone in life, Cindy says she has good days and bad. In fact, both her children, who are active in sports, have had concussions. “You suffer through it with your child. It is not just something that happens to them, it is something that happens to you. The amazing thing is Winston has such great support for head injuries. We actually went to a concussion clinic,” says Cindy.

She learned the importance of the child being symptom free for the same amount of days he or she had symptoms. Therefore, the recovery time period can seem lengthy. “It is hard to get your son to be still when he feels fine. But the doctors were really great with him and helping him understand that.” Cindy admits that with life’s ups and downs, she realizes that keeping the bigger picture in perspective is essential. “When you have a challenge, you have to remind yourself that this too shall pass. It is usually from those challenges you learn the most and makes you really appreciate the successes.”

Our neighbor’s outlook on life likes to a quote by Martin Luther King. “The function of education is to teach one to think intensively and to think critically. Intelligence plus character – that is the goal of true education.”