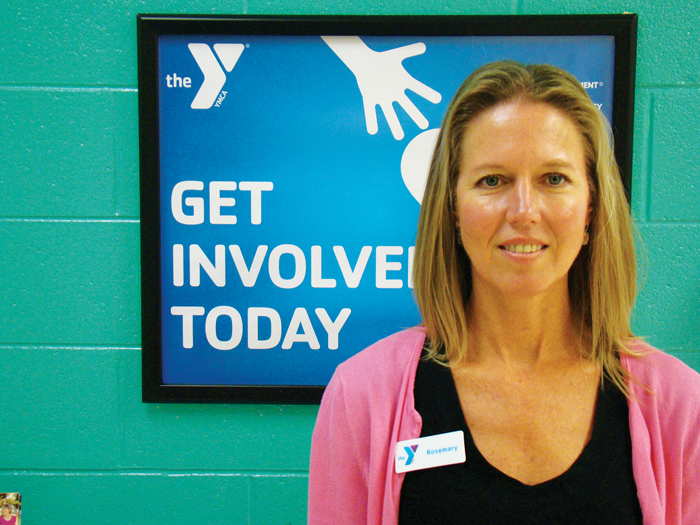 Rosemary Suess is the new executive director of the Jerry Long Family YMCA.

Rosemary Suess (pronounced ‘cease’) joined the Jerry Long Family YMCA at the end of July as the new VP of Operations and Executive Director.

Suess comes to Clemmons from the Kernersville YMCA but her roots with the YMCA extend beyond Kernersville — even beyond North Carolina. Rosemary had a career in accounting prior to becoming employed at the YMCA. She enjoyed teaching group exercise and she sought out her local YMCA to satisfy that need.

Her YMCA roots began in Cleveland County where she taught everything from kick boxing to boot camps. She later became employed by the Y as a group exercise instructor that led to a position as a wellness director in Shelby. She later helped open a YMCA branch in Kings Mountain as the membership and wellness director. Her experience in Cleveland County led to a job in Charlotte and then New Orleans where she was an Executive Director.

Her experience in New Orleans luckily landed her back in the NWNC YMCA Association as VP of Operations over the Kernersville and Stokes branches. Well qualified and well versed in all aspects of YMCA life, Rosemary now joins Jerry Long Family YMCA fully equipped to lead the YMCA as it continues to grow and serve western Forsyth and eastern Davie counties. Not only does Rosemary serve the YMCA through her long-standing career, her husband, Michael Suess, is the Facilities Manager for two YMCA’s in the NWNC association.

And the story doesn’t end there—her son is the Sports Coordinator for the Belle Chasse YMCA in New Orleans and her daughter also worked part time at a YMCA during college. Rosemary is excited to join the Clemmons Community. “This community is close knit, very connected and supportive of the YMCA,” said Suess. “I’ve enjoyed meeting the members and seeing how engaged our members are,” added Suess. When asked what she wants the community to know about the Jerry Long Family YMCA, Rosemary shared the focus of the YMCA—youth development, healthy living and social responsibility. “The YMCA is more than a place to work out. The Y serves the needs of our community through the extensive list of programs offered. We have something for all ages and all stages of wellness,” Suess said.

Programs are offered for childcare, after school programming, group exercise, swim lessons, pre diabetic classes, support groups for cancer survivors and their families—the list goes on. “The YMCA does not turn anyone away. We are able to assist anyone interested in being part of the YMCA through the generosity of our annual giving campaign. Every dollar raised stays right here in our community,” said Suess. During her first year at Jerry Long, Suess is very intentional when asked about her goals for the Y. She wants to continue to engage, partner and collaborate with the community, provide a culture of diversity and inclusion at the YMCA and increase the mission impact of the Y’s Christian heritage.

Rosemary encourages members of the community to stop by the YMCA to meet her and to learn more about the ‘hub’ of Clemmons. “This is a true community center for our village. We serve the needs of many and seek to provide resources that might otherwise not be available,” said Suess.

Upcoming events at Jerry Long Family YMCA include movie night on Saturday, September 17th in partnership with the Village of Clemmons and the annual Fall Festival on Friday, October 28th from 6-8:30 pm. The festival and movie night are open to ‘kids’ of all ages. To learn more about the Jerry Long Family YMCA, visit www.jerrylongymca.org, call 336-712-2000 or stop by at 1150 S. Peace Haven Road.