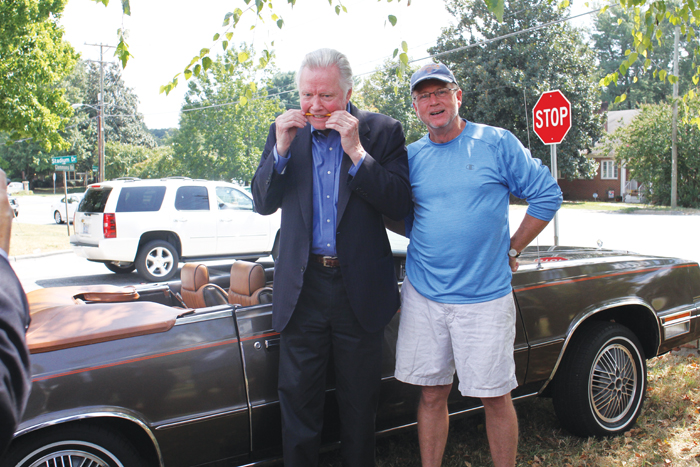 Actor Jon Voight bites a pencil to add to the authenticity of the LeBaron convertible like one seen in an old “Seinfeld” episode.

Maybe you remember the episode in the old TV sitcom “Seinfeld” in which George buys what he thinks is Jon Voight’s old car, a 1989 Chrysler LeBaron convertible.

While driving in the car, Jerry discovers that “Jon” is spelled “John” on the old car title, placing the movie star’s ownership in doubt. Jerry also found a used pencil in the glove compartment with teeth marks. Jon Voight’s bite?

When the real Jon Voight appeared in Clemmons last week, up drove a carbon copy of that LeBaron convertible driven by a Lewisville fan. (Sorry, but he got away before we could get his name.)

He asked Voight to bite a pencil for him, and the actor gladly agreed. Jon Voight appeared as himself in the television show. He gave the pencil a solid bite.