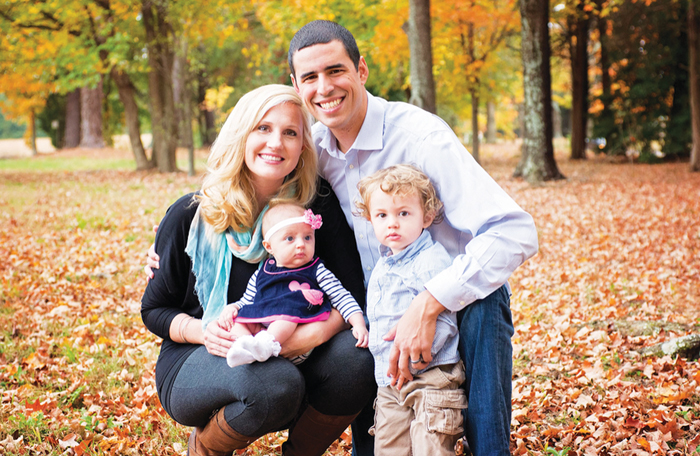 One of her requirements was to make a video that had to do with community.

Susan took the viewers on a visual ride throughout Winston-Salem. “I didn’t think I had a chance because I’ve never made a video like that before,” Susan says. “I went with a downtown theme because I thought people nationwide would see the charm and how much we have grown. Also, I had my kids with me. We went went to over ten places so I needed to keep the stops as close together as possible to avoid meltdowns. Brayden (son) actually took a nap on a fancy sofa at Twin City Coffee. Leah (daughter) loved trying five different entrees within an hour.” Having grown up here, Susan found it easy to make a video on what makes our area great.

From a young age, her parents taught her the importance of raising the bar high and jumping far beyond it.

“They instilled hard work and integrity in me since day one. My mom was always the parent who took the teacher’s side, which drove me crazy as a kid. Now that I am a parent, I look back and think, “That was great. She just wanted me to be the best version of myself.’”

Susan admits there were no excuses allowed in their household. She was expected to attack life with alacrity and tenacity. To no surprise, Susan was a diligent student and an amiable one as well. She was involved in a collection of sports and was Homecoming Queen her senior year at Mount Tabor.

Upon graduation, she attended Elon University. Shortly after receiving her degree, Susan moved back home. Coming from a big family, which included two brothers and one sister, Susan enjoyed being around her siblings. It seemed a natural progression to team up with her brother, Thomas Maier, when it came time to go to work.

“My brother, who is now my manager, and I went into real estate as a team. We wanted to be thoroughly involved in the changes and growth that were going on in our city. I have been in sales for as long as I can remember. As a middle child, I love being around people. Real estate seems like a natural fit.”

Susan also volunteers at Big Brother Big Sister and Junior League, among many other places. She also has a young boy and girl with her husband, Raul. With two little ones toddling between dolls and trains at home, Susan’s work still continues.

She has won awards such as the “40 Leaders Under 40” for the Triad Business Journal. She has also acquired the Chairman’s Circle Recognition, an acknowledgement given to the top two percent of agents nationwide. Susan says it is easy to succeed when you love what you do.

“My dream scenario would be to help a first-time single home buyer, then help them sell that house and buy another when they get married, then help them purchase a larger home once they begin a family, and help them downsize when their kids go to school and they become empty nesters. If I can maintain relationships that long, then I will feel successful and fulfilled.” Another area where Susan wanted to succeed was in winning that national video competition.

In order to beat the other finalist, she had to get more “likes” on Facebook than her competitor. “There were about 500 and 600 likes on my page. I was going through this list of names thinking, ‘Is there anyone else I can ask to like my page?’” Susan’s persistence paid off. The day the deadline approached, Susan had more likes and won the nationwide contest gaining $1,000 to be spent towards marketing. The winner was certainly entitled to a sense of pride.

“My father always said that we were the luckiest people in the world to be born in the United States. He said, ‘You can be anything you want and achieve anything you want if you are willing to work hard enough.’ Growing up, I thought that was inconsequential,” Susan says with candor accompanied by a hint of a smile. “Now, I couldn’t agree more.”

Some people are born with innate talents. Michael Phelps was meant to swim. Amelia Earhart was born to fly. Perhaps our neighbor, Susan, was born to provide a marriage between families and their homes.