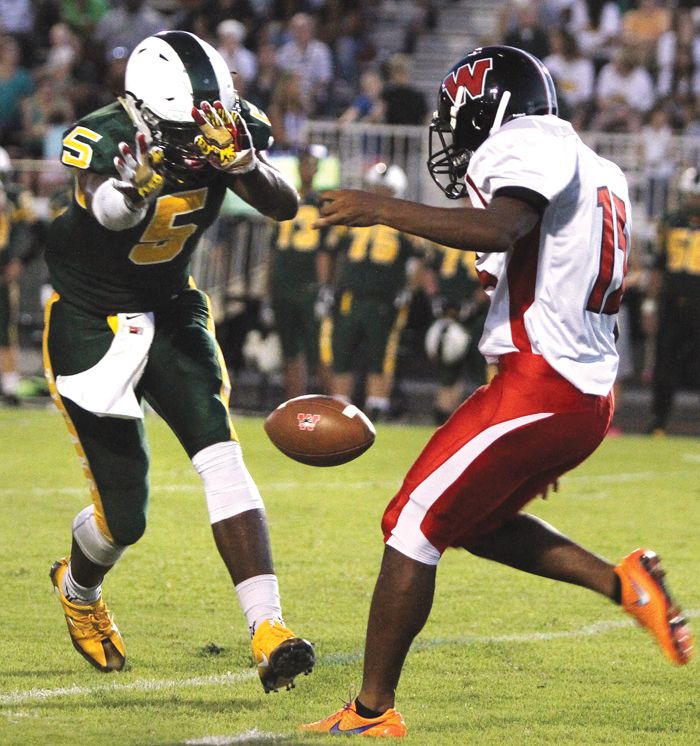 Gentle Readers, this is the weekend of the river grudge matches.

Texas vs. Oklahoma for the Red River Rivalry.

West Forsyth vs. Davie County for the Battle for the Yadkin River Bridge. Another chapter in the annual Yadkin River Bridge shoot-0ut is planned for Friday night. Davie County will invade Clemmons for West Forsyth High’s homecoming game. Last year’s game seesawed back and forth in Mocksville until the Titans picked off an errant Davie pass at the last minute to seal victory.

The two schools have engaged in some classic battles over the years.

The War Eagles have a dazzling pass-happy offense capable of scoring fast and often. West Forsyth has behemoth defensive lineman K.J. Henry, a 6-foot-5 junior who has blocked three punts and two field goals already this season and scored two touchdowns. And then there is the weather … A hurricane is swirling in the Atlantic and may be dumping rain on us by Friday night. Unless there is lightning in the mix, West Forsyth likes to play in the rain if it means dampening an opponent’s pass attack or size advantage. The homecoming court may get wet, but Snow will likely opt to play in the rain if it improves his chances of winning. Friday night promises to be an exciting game.

West will try to contain an potent aerial attack by an amazingly accurate quarterback, Chris Reynolds, and a sure-fingered receiver, Cooper Wall. Davie’s only loss is to state-power Greensboro Dudley. The War Eagles dealt a shocking season-opening loss to Greensboro Page. The War Eagles are for real. The Titans, playing before a homecoming crowd, will have to stop Davie’s passing attack. West’s only disappointment has come at the hands of East Forsyth. Both teams are 5-1. West is on a four-game win streak.

Last year, the Titans’ gifted Darion Slade overwhelmed Davie 36-22 in a second-half blast. “I think it will definitely be a good game,” predicted Davie County Enterprise Record sports editor Brian Pitts. “(West Coach) Adrian Snow said there has only been one blow-out in the rivalry since he’s been there. It will probably be another four-quarter game.” Davie, meanwhile, is on a pay-back mission to redeem itself from last year’s miscues. So far, the War Eagles have taken revenge on West Rowan, Page and Reagan for last year’s embarrassments. “West is next on (Davie Coach) DeVore Holman’s to-do list,” Pitts said. Follow the game on Twitter with Pitt’s play-by-play account, “@BrianPitts879.”