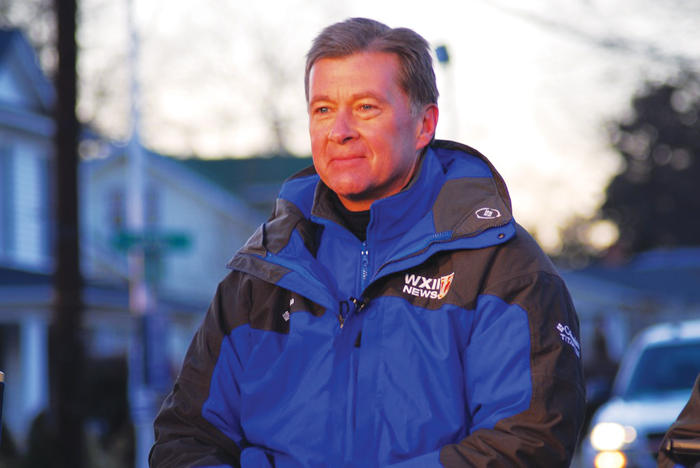 Cameron Kent will step down at the end of the year from his familiar role on the WXII news desk.

As the son of a three-star general, Cameron Kent might have been tempted to follow in his father’s military footsteps. Having been raised in Alexandria, Virginia, twenty minutes from the Pentagon and fifteen minutes from Capitol Hill, he might also have chosen to work in politics. Instead, he found himself fascinated by newsmen like CBS News Anchor Walter Cronkite and reporter, Dan Rather. The nightly news drew young Cameron in like a bee to honey. He remembers some events in particular, “Especially during coverage of the Vietnam War — watching the reporters in the field like Dan Rather– that to me was very exciting,” Cameron recalls.

During the early 70’s, a news story broke that would influence the outcome of a presidency. Bob Woodward and Carl Bernstein uncovered the Watergate scandal for The Washington Post. The investigative reporting ultimately led to the resignation of President Richard Nixon. Reflecting back on the influence of those legendary reporters, Cameron says, “I think Bob Woodward and Carl Bernstein became heroes of mine.”

Even though Cameron ultimately decided not to pursue a career path in the military, his father was still very much a role model. Cameron remembers, “My father was a general but also a very mild-mannered, soft-spoken, gentle man. He loved sports. He taught me a lot about patience, remaining calm under pressure. He never sat you down and gave you lectures. He was always under control and that turned out to be a really valuable lesson.” On the other hand, Cameron’s mother was a very cultured person. “My love of the arts, of literature, learning, and traveling comes from my mother. I grew up going to ball games with my dad and museums with my mom.” Cameron says his parents would never push him to achieve, but kindly encouraged him. “My dad was the type who would buy a baseball glove and play, but the rest was up to me.”

Setting goals was one task Cameron learned from his father. His father, it seemed, could lead by example. Cameron notes, “My father grew up poor during the depression and I saw how hard he worked. It was a great example. Through hard work, you can achieve a lot of your goals.” Cameron’s ambition, of course, was to become a reporter. “Beginning really in 7th grade — was when I first started writing articles,” Cameron notes. In high school, he wrote for the school newspaper at Mount Vernon High School and for the local paper, The Mount Vernon-Lee News. He even started his own football magazine that covered the high school football matches. Copies sold for 25 cents. Cameron recollects, “So on Friday nights, when everyone is going out, I am going home to my manual typewriter and writing stories because the deadline is the next morning.” Still, he didn’t just report on sports. He participated in a few, as well. Cameron wrestled, ran track and played golf.

When it came time for Cameron to choose a college, he says he had friends going to Wake Forest University. Once he drove around the campus, he knew he wanted Wake to be his home for the next four years. Going into college, he also had a good idea of what he wanted to study. He remarks, “I wanted to be a sports columnist for newspapers.” While he was at Wake, Cameron found a few professors who really made an impact. He remembers Professor Bynum Shaw as one of them. “He had been a city editor at The Baltimore Sun. He was a newsman’s newsman. Everyone who took his class understood it was about journalism — fairness, attention to detail, accuracy. That’s what we learned from Bynum Shaw. Most influential person in my career by far.” Professor Allan Louden was another teacher who impacted Cameron. He taught speech classes. Unbeknownst to Cameron at the time, it was a tool that would soon become important to his career.

Upon graduation, Cameron got a job as a hunting and fishing reporter for a paper in Greenville, South Carolina. Interestingly, the same newspaper also owned WXII in Winston-Salem. The man who was about to give Cameron the job as a hunting and fishing reporter asked the young graduate if he was familiar with Winston-Salem. Cameron recalls a turn of events he had not anticipated, “The next thing I know, he calls the GM (General Manager) at WXII and says, ‘I have a kid here and I want you to give him a job.’” Cameron would not turn the offer down. The next day, Cameron walked into WXII to begin a career that has spanned over 35 years.

On August 20, 1979, Cameron started off as a newsroom assistant. “I was a gofer,” Cameron smiles. “I would go to the Greyhound bus station to pick up video, make coffee, make calls to the police and sheriff, and tape the snake.” What exactly is “taping the snake”? During that time period, the teleprompter was a camera with a fixed conveyor belt. Once Cameron taped the long script together, he would place the scripts (the snake) on the conveyor belt. The anchor ran the teleprompter himself with a foot pedal. “It was anchor Robin Richards. He would tell me neatness counts,” remembers Cameron. His reasoning was more than philosophical. If the papers were not placed properly on the conveyer belt, everyone would hear the distracting crinkling of papers in the teleprompter during the newscast.

Cameron’s hard work paid off, just as it had for his father. He was soon promoted to night side reporter. He went on to become the Greensboro Bureau Chief and eventually the sports director for eight years. However, in 1988, Cameron decided he wanted a change of pace. He quit his job, packed up his dog, and headed west to Los Angeles, California.

“I knew one person,” Cameron recollects about his venture to the place where he hoped to break into the film and TV industry. Undaunted by any stiff competition or harsh criticism, Cameron set his goals and began to pursue each one. He took classes, studied film, and just wrote. He had four films produced for TV movies on NBC, HBO and Lifetime. “I loved it. It was a great learning experience. I learned a lot about being independent. But I’m so glad we moved back to North Carolina to raise children.” The “we,” Cameron is referring to, is his wife, Sue. He and Sue had known each other at Wake, but were reacquainted in California when they both signed up for the same softball team. “Timing,” Cameron smiles about the serendipitous moment. After being out in California for a little over six years, Cameron, Sue, and their two babies, packed up to head home.

It was 1994 and Cameron thought he might like to get back into the news. “There was an opening at Channel 12 and the GM said, ‘What do you think about coming back as the news anchor?” Cameron accepted and has hit the ground running since. At WXII, Cameron has covered an array of stories. His job has given him ample time to reinforce some of the values his father taught him, especially the importance of staying calm during the cacophony of breaking news. “During breaking news, there is a lot of chaos going on around you. You have to take it all in and report. You have to keep your wits about you.”

As a reporter, Cameron has found there are some stories that have been more impactful than others. Not because there was an immediate emergency or because it was breaking news. Rather, the human interest aspect was one that provoked intense empathy. He remembers reporting on a homeless man named, George, and his quest to stay warm when he had no bed to sleep in at night. Every time Cameron would see George, he felt moved to give him money. “Several years later, a story came across the wires that a man died from hypothermia under the train trestles. It was George,” recollects Cameron.

Although some stories are more tragic than others, Cameron has enjoyed working as a news anchor because it has also afforded him the chance to give back to the community. When asked to speak at an event, partake in a book club, or volunteer, Cameron tries to almost always say yes. “I’m very lucky to work for a station that believes in strong journalism and community.” Cameron says he is also grateful to work with such great co-workers. “People say we look like we get along on-air. It comes across on TV when people don’t get along behind the scenes. It is easier to do a stressful job when you get along as a team.”

That team, however, will soon lose a star teammate. Cameron has decided to take his microphone off at the end of the year to retire. Some might find it hard to imagine Cameron in retirement and with good reason. Cameron, who has authored three books, just finished a new manuscript. The book is called, The Sea is Silent. It’s about a newspaper reporter who botches an investigation and seeks redemption. Cameron’s other book, Road to Devotion, will soon be turned into a film. Cameron will be writing the screenplay for the film. Cameron also has plans to write two more novels and a play. Additionally, he has a Sunday School program he will develop from his book, Road to Devotion. “I want to spend more time with my wife and family. I also plan to stay involved in the community and with charities.” So while our own Walter Cronkite of Winston-Salem says he will retire from his news anchor post, in no way will our neighbor be slowing down. As Walter Cronkite used to say when signing off from the news, “And that’s the way it is.”