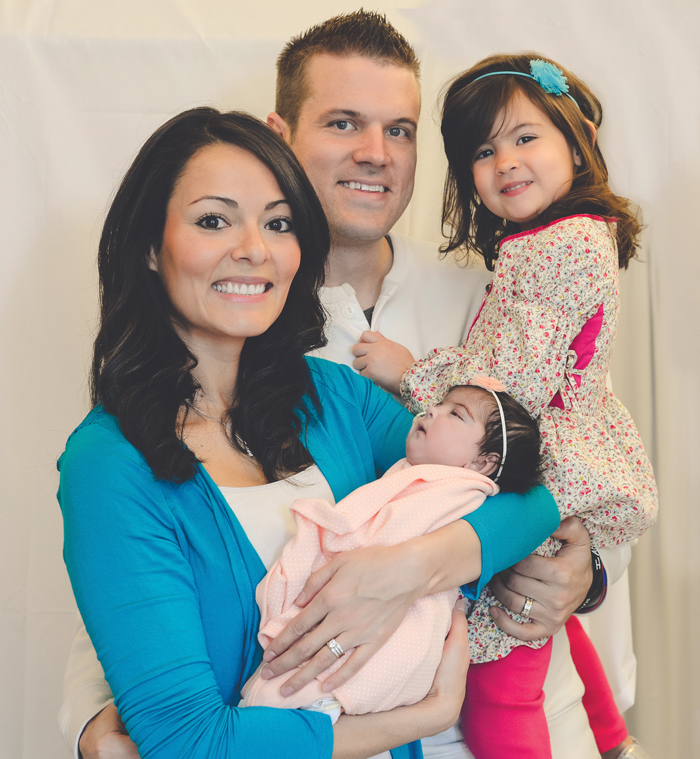 Lisa Bocan was adopted at four-years-old. When Lisa met her husband, Matt in 2005, the two instantly fell in love with each other. The two married in 2007. “We spent the early part of our marriage moving around the country for his work. We lived in various cities throughout Minnesota, Texas, Louisiana, and South Dakota. After seven moves and the birth of our first daughter, we decided to settle down,” says Lisa. They chose to begin their new life with their new daughter in Lewisville, North Carolina. “Life has dealt us our fair share of ups and downs, but we never knew the joy and sorrow that awaited us after this relocation.”

In Lewisville, Matt began to work as the franchise owner of Express Employment Professionals. Lisa started a small photography business, Lisa May Photography. The couple decided it was time to grow their family and became pregnant in January, 2015. “After suffering three early miscarriages, we were thrilled when we learned that our baby’s heartbeat was strong and she was growing.”

At eighteen weeks, the couple were eager to go into the doctor’s office to see if they would be having a boy or girl. What was supposed to be an exciting doctor’s visit turned into a nightmare. Lisa says she instead heard words she will never forget. They were told, “I’m so sorry, but there is something wrong with your baby’s heart.” Lisa and Matt soon discovered their baby had a rare congenital heart defect called Hypoplastic Left Heart Syndrome (HLHS). Their little baby girl would be born with half of a heart and there was absolutely no cure for her condition. “In shock, we entered the world of Congenital Heart Disease which affects one-in-100 babies. We grieved the loss of a healthy baby, but we weren’t giving up. We researched and decided to go to whatever lengths possible to give our daughter the best care, because she deserved the very best,” Lisa says.

In order to receive the best care, the family would need to move once again. Boston had the number one Children’s Cardiac Hospital. So they packed their bags and headed north. Mila was born at Brigham and Women’s Hospital on September 10th, 2015. “She had sparkly dark brown eyes, a head full of hair, and the most perfect little dolly lips that you ever did see. Mila means miracle and she lived up to every bit of her name.”

After birth, Matt and Lisa discovered Mila had Jacobsen’s Syndrome. It is a very rare syndrome caused by a deletion on the 11th chromosome. After only being on earth for four days, Mila underwent her first open heart surgery. She survived, but would need another just shy of four months old. “She recovered from the second surgery and we could finally see a glimmer of light. We even discussed the idea of taking Mila home before her next surgery. But our Lord had a different plan.”

On February 1st, Matt and Lisa discovered Mila had suffered massive bleeding in her brain. There was nothing the doctors could do to save her. “We prepared to say good-bye to our littlest love.” Matt and his other daughter had flown back to North Carolina for bit of normalcy, but would now return to Boston to say good-bye. “Mila waited for all of us to be together before departing for heaven. I held her in my arms as Jesus lifted her into His. There was so much heartache in Room 14, deemed ‘The Princess Castle,’ but also so much peace and love and joy. The gift that was and is Mila Rose has blessed us beyond measure.”

Matt and Lisa have been back home in North Carolina for a little under a year. They admit their hearts still ache. “We are learning how to do life again.” Matt and Lisa lean on the support of their church community, family, friends and Boston family, too. They also have one wonderful little distraction. “Our four-year-old daughter is a constant ray of sunshine. She reminds us to laugh and to play. We talk about Mila often. As we tell our daughter, ‘Mila lives in our hearts now.’”

Lisa reflects upon the hardships she has encountered — the grief she was dealt. “We don’t always navigate it well, but if there is anything we have learned from this journey, it is to have no regrets and to always cling to hope. Hope never disappoints. If you have experienced loss, know you’re not alone.” Lisa acknowledges she and Matt like telling Mila’s story because it enables them to support other families suffering from similar heart conditions. “Our family is still broken, but we are healing. There is so much hope in front of us. We are grateful for our story. Life will never be the same. But to call Mila ours, to know we will see her again in heaven and to know her four an a half months helped people to pray and to spread love, makes us so proud.”

While Mila was only born with half of a heart, it is quite impressive to hear of the whole-hearted love glowing from inside the hearts of her parents. Lisa and Matt, know our hearts go out to you. Matt and Lisa’s full story can be found at http://milasheart.wordpress.com Or on their Facebook page at www.facebook.com/MilaRoseBocan