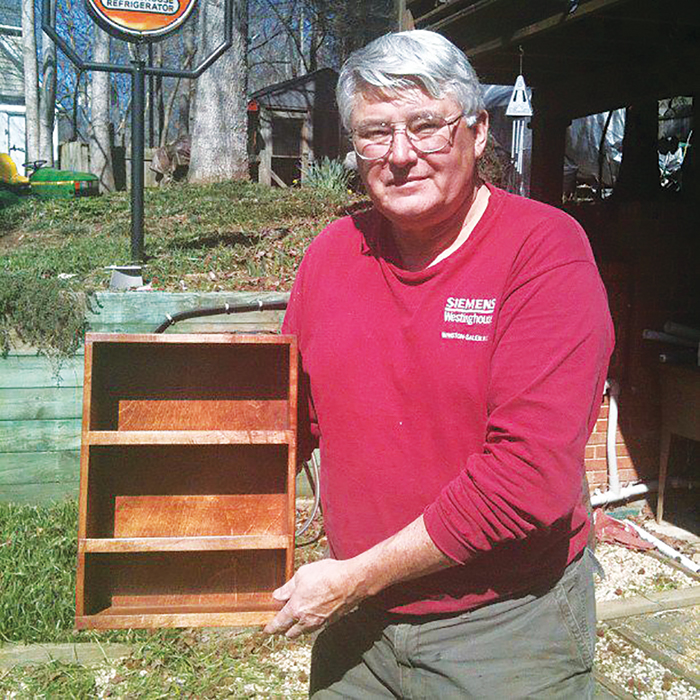 Glenn Yarnell, at right, and his father and grandfather worked for Westinghouse for nearly 100 years combined. He made a spice rack with lumber from the factory.

In 1865, George Westinghouse patented the rotary steam engine. He was just nineteen years old at the time. George continued to invent various devices to improve the railroad. One major invention that was patented, was the air brake. The Railroad Safety Appliance Act of 1893 accepted the air brake and began using it on all American trains. Westinghouse formed his own company, Westinghouse Electric Company. He began to perfect alternating current electrical systems.

Fear of safety concerns made it controversial at the time. Westinghouse competed with companies such as General Electric, and was a major supplier to the electric utility industry. It also produced nuclear reactors for U.S. Navy submarines. Then, in the 1990’s, the Westinghouse company purchased the major television network, CBS, and Infinity Broadcasting Corporation. Those purchases formed the largest merger of the two biggest radio broadcasters.

Westinghouse then decided to focus solely on television and renamed itself CBS, in 1997. Here, a local family has been with the Westinghouse Company throughout its existence.

Glenn Yarnell, is a third generation employee of Westinghouse. He started in 1971, but his history with the company goes back to the early 1900’s. His grandfather worked for thirty-nine years at Westinghouse Manufacturing Company and began his tenure in Pittsburg, Pennsylvania, in 1916. “He moved to Lester, Pennsylvania, to work in the new plant built to make power generation steam turbines. He even knew George Westinghouse,” notes Glenn. “Then, my dad started to work in this plant at the age of 15, after quitting high school.”

Glenn recalls his dad only making nine cents an hour. “He was later accepted in a Westinghouse journeyman program. During this program, the company sent him back to high school. He worked second shift.” Glenn’s father worked for the company for forty-nine years and ultimately managed over a thousand people. “He has always been my hero in life.” It is no surprise, Glenn followed in the footsteps of his father and grandfather.

He began his work at the plant in Lester after six years of college and four years in the Navy. Glenn worked for the plant in Lester for fourteen years. However, he broke tradition by moving away from Pennsylvania. Glenn was needed in another Westinghouse plant. His next stop would be in the Tarheel state. Glenn moved to North Carolina to work for the Westinghouse plant in Rural Hall. He worked there for sixteen and a half years followed by five years with the main division headquarters in Orlando.

Glenn ultimately worked for Westinghouse for thirty-five and a half years. However it was in Rural Hall, where Glenn started realizing the rich history of Westinghouse. He began collecting Westinghouse memorabilia. The largest item Glenn owns is a special built-in plant fire truck from the Rural Hall plant.