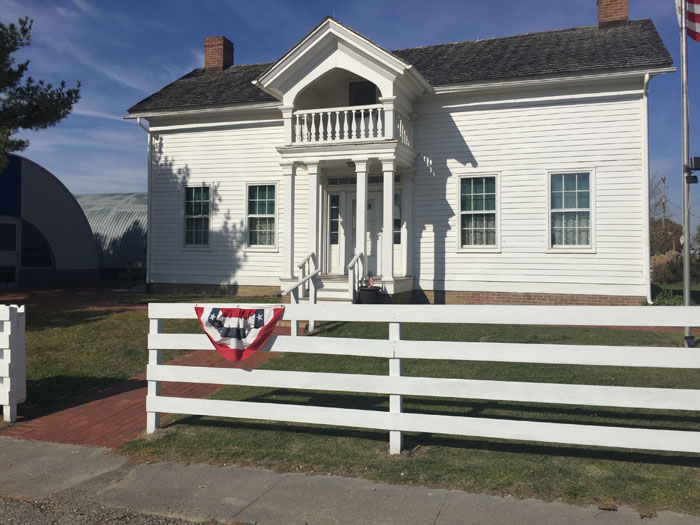 DANA, Ind. — Thinking the danger had past, he and a soldier raised from a ditch and became instant targets for hidden Japanese machine gunners on Okinawa.

On straight U.S. 36 in corn and soybean country at the Illinois-Indiana line, Elizabeth and I turned off for a quick look Saturday at the boyhood home of the Pulitzer Prize winning reporter who saw more action in World War II than most soldiers.

From Northern Africa to Italy to the D-Day landing and finally to the Pacific, Pyle experienced the war up close with his Army buddies. His family’s tiny clapboard home is now a museum in his memory. A familiar World War II quonset hut beside the museum holds many of his wartime artifacts. He was bestowed a Purple Heart posthumously. His face was put on a postage stamp. A Boeing B-29 Superfortress was named for him.

Further down the U.S. 36, also named Ernie Pyle Highway, a marker — identical to one erected at Okinawa — recalls, “At this spot the 77th Infantry Division lost a Buddy, Ernie Pyle., 18 April 1945.” The entire nation mourned his death. He was a journalism rock star.

Old accounts recall that mothers of soldiers prayed for the safety of their sons … and for Ernie Pyle. He kept them in touch. His readership was estimated at a whopping 14,000,000. The Navy had a policy that prohibited its sailors from being identified by name by reporters. The Navy lifted that policy just for Pyle.

This was the military’s notice of his death: “I regret to report that War Correspondent Ernie Pyle, who made such a great contribution to the morale of our foot soldier, was killed in the battle of Ie Shima today.” His death was noted with sorrow by President Truman, politicians, Gen. Eisenhower and much of the Army brass. He was buried where he fell with his helmet on and placed between other battlefield casualties.

From his obituary by the New York Times, “Word of Pyle’s death started tears in the eyes of millions, from the White House to the poorest dwellings in the country. President Truman and Mrs. Eleanor Roosevelt followed his writings as avidly as any farmer’s wife or city tenement mother with sons in service. Mrs. Roosevelt once wrote in her column ‘I have read everything he has sent from overseas,’ and recommended his writings to all Americans.”

He went with the GIs into battle, writing from foxholes. He always got the names of the soldiers around him and their home addresses. He followed the Americans as they battled across Europe, barely escaping an accidental bombing in Normandy following D-Day.

His columns became books and even a couple of movies. But when the war shifted to the Pacific, he went too, seeing it as part of his duty to the soldiers.

Navy Secretary James V. Forrestal wrote of Pyle’s death, “Mr. Pyle will live in the hearts of all service men who revered him as a comrade and spokesman. More than anyone else, he helped America to understand the heroism and sacrifices of her fighting men. For that achievement, the nation owes him its unending gratitude.”

Gen. Eisenhower: “The GI’s in Europe — and that means all of us here — have lost one of our best and most understanding friends.”

Gen. Mark W. Clark: “He spoke the GI’s language and made it a part of the everlasting lore of our country. He was a humble man and in his humility lay his greatness. He will be missed by all of us fighting with the Fifteenth Army Group. There could have been only one Ernie Pyle. May God bless his memory. He helped our soldiers to victory.”

Doing nothing at the beach for a week

Jury socks it to Mocksville for police firings