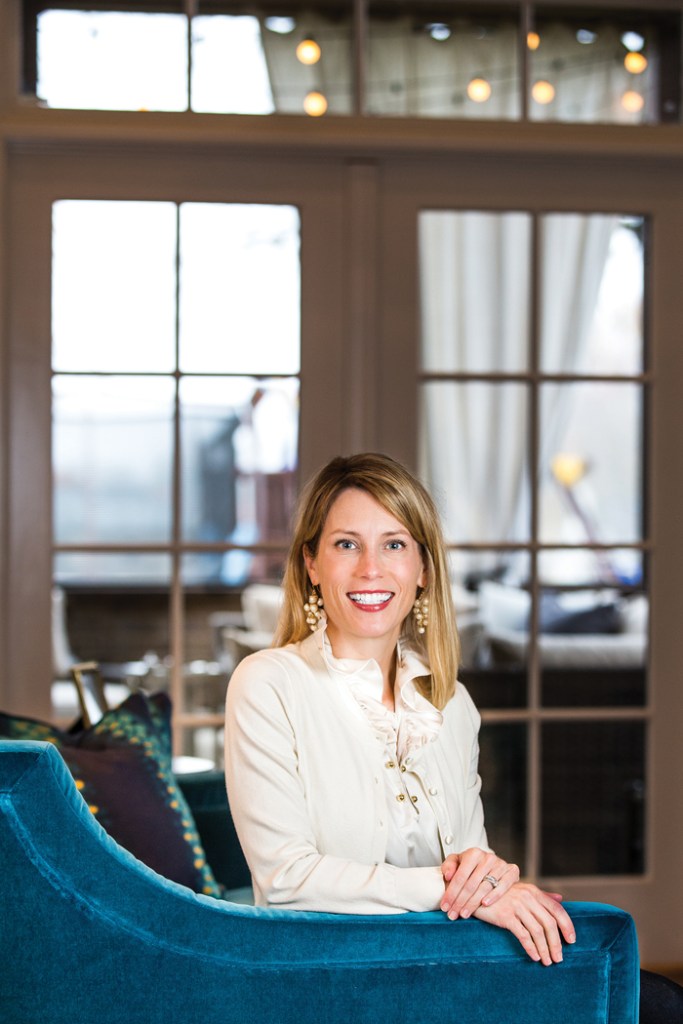 Ellyn Johnson Owens has a rich history with Clemmons, dating all the way back to the mid 1700’s. One of her great great grandfathers, William Johnson, immigrated from Wales and settled along the Yadkin River in what is now known as Tanglewood Park. “In 1757, he built a fort — a plaque marks the spot across from the Manor House — to protect his family and neighbors from the Indians,” notes Ellyn. “His grave is marked by the tallest tombstone in the graveyard beside Mount Pleasant Church.” As many of us know, eventually the land at Tanglewood was sold to the Reynolds family. The Johnson family then moved up the road to Farmington. Ellyn’s father, William Gaston Johnson, Junior, was born and raised in Farmington. “My mom was raised in Mocksville and is the daughter of the late Roy, and still living Vena Harris, who started Davie Auto Parts. They were high school sweethearts.”

The couple both graduated from Chapel Hill but returned to Mocksville to raise their family, including little Ellyn. Ellyn grew up on a farm with two younger brothers. “Our house was a Greek revival brick house that was built during the Civil War, completed in 1866. It became part of the Boxwood Farm in the 1930’s which was a large cattle farm through the Depression and into the ‘60s. We moved in when I was four.”

Ellyn’s father wanted his children to be raised in an area where kids could be kids. “It was my dad’s wish that his family grow up with enough land to explore and enough chores to keep us out of trouble.”

There was plenty of work to be done on the farm. Ellyn’s father owned Johnson Insurance Company in Mocksville, but farming was a favorite hobby. Ellyn was surrounded with cattle, horses, chickens, sheep, dogs, and cats. There were also acres of vegetable gardens. “Saturdays were for picking up sticks. The property was full of 150-year-old oak trees. It was also a day for weed pulling, mending fences, veggie picking, tending to animals, but also fun — fishing, horseback riding, magnolia tree climbing,” recalls Ellyn. “It was a kid’s paradise, while teaching us the value of hard work.”

Eventually, all little kids grow up and Ellyn was no different. Once she graduated from Davie High School, she followed in the family tradition and attended Chapel Hill. With a biology degree and a minor in chemistry, Ellyn decided to head to optometry school in Memphis, Tennessee. There, she became a Teacher’s Assistant (TA) while in school. As it turns out, becoming a TA was one of the best decisions Ellyn made because it was during this time she met a very impressionable student. “This funny, smart, long-haired Memphis musician-turned-optometrist caught my attention.”

The student’s name was Chris Owens. Chris thought he wanted to study and work in the computer world. However, one class involving computers convinced him otherwise. He turned in the floppy disk required for the computers at that time and never looked back. It was a good decision for Chris because he soon met an adorable TA that was small in stature, but tall in aspirations. Chris, as Ellyn puts it, “…won my heart and a year later we were engaged after my graduation in 2000.”

After Ellyn completed her residency in ocular disease in Jackson, Tennessee, the couple came home. Between the two of them, the Owens worked in Mocksville, Lexington, Yadkinville, and Baptist Hospital. But they wanted to start their own vision center. “If it wasn’t for our mentors, Dr. Steve Laymon and Dr. Brett Munn, we wouldn’t be where we are today.” Both doctors provided insight into how to start a business while also trying to provide quality care for patients.

The Owens worked hard to save money. “I grew up watching both sides of my family work extremely hard, become successful, value their family and faith. Entrepreneurship is in my blood.” Finally, in 2004, they bought a small practice in Advance, Carolina Center for Eye Care, and moved it to its current location in Advance three years later. It has been a success. In 2013, it was voted business of the year in Davie and voted best healthcare of Davie in 2014 and 2015.

The Owens realize they would not be where they are today if it was not for the wonderful commitment of their community. As a result, the two have made it a priority to also give back. Ellyn and Chris are active in Storehouse for Jesus Eye Clinic. They are also part of Hillsdale Methodist Church, and Chris serves as a board member of the Davie Community Foundation and member of Hillsdale Rotary.

One might ponder how it is working with one’s spouse? Ellyn smiles, “Working with my spouse is a blessing, but it has had its challenges. I love having him to bounce ideas off of because he’s the big thinker and I’m the doer. The challenge is that work comes home and bleeds into our home life. There’s no escaping it. And until we added our first associate six years ago, it was hard to take a vacation. Since then, we’ve added two more associates, which has allowed me more time to focus on family.”

Family is a big priority and a large commitment. The couple has three children, two boys and a girl, ages 9, 7, and 5 respectively. The kids are involved in music, sports, and social activities. “We love to be busy, but also treasure a quiet evening at home roasting marshmallows or escaping the suburbs to my parents’ farm for four wheeler rides and star gazing.”

Recently, Ellyn says she has come to realize that life is exactly how she wants it to be — chaotically full of family, work, and fun. She has worked hard to get to this place in her life. In order to bask in these moments, Ellyn tries to live in the present moment each and every day. “I have recently realized that planning too far in the future may make me skip living in the present moment. I am constantly trying to find balance and be as present as possible for my patients and for my children and Chris. I realize I need to cherish the hard work from previous chapters of my life and enjoy where I am today.” Surely this will not prove to be difficult for our neighbor, because hard work and family unity has been a family value for Ellyn’s family since the 1700’s.