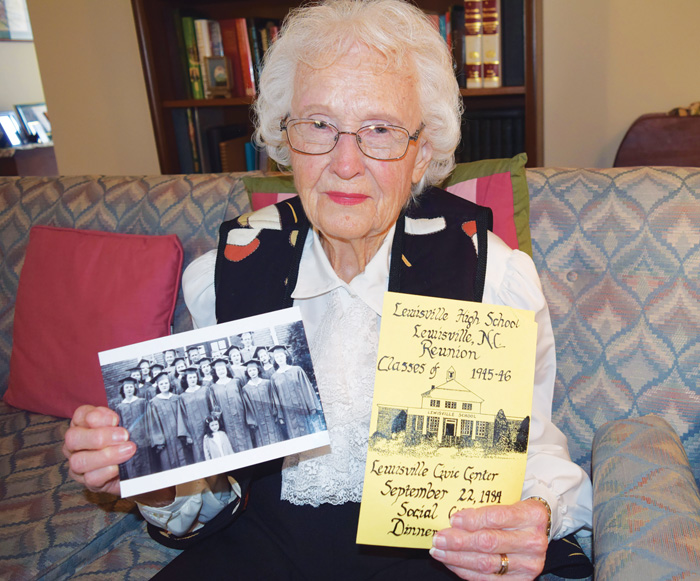 Mary Elizabeth Hensley, Lewisville High Class of 1945-46, holds a picture of her graduating class and a copy of a 1984 reunion brochure. The school burned in December, 1945, and the students were shifted to South Fork for the rest of the school year but kept their identity as Lewisville students. — Photo by Lynn Hall

By Lynn Hall
The Clemmons Courier

A woman, riding by the building around 10:30 p.m. on December 2, spotted something was wrong and sounded the alarm. A fire had started just inside the south entrance, and while a number of local men tried to extinguish the flames with the only fire-fighting equipment available, it wasn’t ineffectual. When it was all over, Lewisville School was gone.

That fire was seventy-one years ago this December, and there aren’t too many people around who still remember the tragedy. But one who remembers is Mary Elizabeth Hensley. Hensley not only lived in the community, but also was a student.

“We were living on Holder Road at the time,” Hensley said. “It was my father and my three brothers and me.” Her mother had passed away the previous year. “Word about the fire spread and I think everyone just felt lost.”

For Hensley and a majority of her classmates, their entire school careers had been spent at Lewisville – from first grade on. She went all through school with her late husband, Marvin Hensley, and her mother had also been a student at Lewisville School.

“It was my senior year when the school burned down,” she explained. “We didn’t know what would happen or where we would finish the year. We lost textbooks and desks, everything.”

A Winston-Salem Journal article dated December 3, 1945 reported that the school loss was estimated to be $100,000. No cause for the fire could be determined and that no flammable materials were stored in the area where the fire originated.

The school principal at the time, A. C. Loveland, said while the fire was discovered just above the cafeteria, early witnesses did not believe that’s where the fire started. He also said there was no heat in the building as it was not cold enough for pipes to freeze. The janitor left heat on in the building only if the temperatures were likely to drop below freezing.

Hensley said she doesn’t believe they ever determined what caused the fire.

After the fire, the school superintendent and principal arranged for students to be bused to an area school where plans were discussed for how the year would continue. Students in grades one through six were relocated to Vienna, while the seventh and eight graders were able to make use of an agricultural building that was left undamaged by the fire.

“The high school students were sent to South Fork,” she said, “where they partitioned off hallways and used the cafeteria for classroom space. It was very crowded. But we finished the year and graduated with our diplomas said Lewisville School.”

Hensley has lots of fond memories of her years at the school. “I wasn’t a great student, but I loved school and my teachers. I also loved having a chance to play basketball, softball and run track.”

She said when she was a young student, living on Holder Road, they used to walk up to the small grocery store just beyond Harmony Grove United Methodist Church on Styers Ferry Road to catch the bus. “The owner would open the store early in the winter so that we could go inside and get warm while we waited,” she said.

In 1984, the classes of 1945 and 46 held their first class reunion. “We did a joint reunion because for a long time we were all in the same class. The grades only went to 11th and when the school system added 12th grade, they split our class into two classes, a seventh and an eighth grade “Marvin became a senior and I was a junior,” she explained.

The Hensleys eloped after she graduated. She and her husband, along with several other classmates, did the organizing for that first reunion and she’s been involved in the planning ever since. For a while the group met every five years, then every three and now with so few left, they meet every year. She just recently attended a reunion, where there were three members from the class of 1945 and three from 1946.

“We have two other classmates, but they were unable to attend due to health issues.” Henley said. “We have a lot of wonderful memories of our school years in Lewisville, favorite teachers, activities and friends and it’s wonderful to be able to get together and share those memories. It was different when people stayed in one place and you went to the same school year after year. We definitely formed some lasting friendships.”

Lewisville School began as Lewisville Academy in 1901 when it was founded by the Methodist Quarterly Conference. The school was expanded and renovated in 1907 and became the first public school in this area of Forsyth County. “In 1923 the wooden structure was replaced with brick, and the administration boasted about the steam heat, running water and 28 classrooms, luxuries not everyone had at home,” she said.

After the fire, it was 1948 before a new school was completed and ready, and all of the grades were returned to Lewisville. At the time of the fire, there were 400 students enrolled.