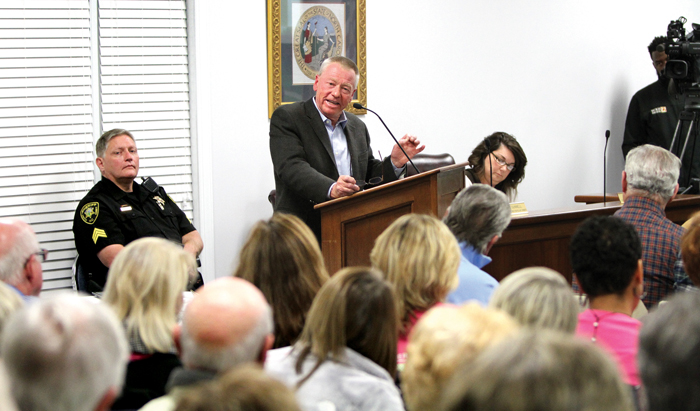 The public finally got its say on the proposed median for Lewisville-Clemmons Road at Monday night’s Clemmons Village Council meeting.

Those in the overflow crowd at Village Hall were overwhelming opposed to the median from I-40 to U.S. 158 during the public hearing, and when that was completed, the council and Mayor Nick Nelson continued with a spirited debate on the reasons to be or not to be in line for $21.23 million in funding from the NCDOT – if the state gives its approval in January 2017.

Former mayors, councilmen, business people and concerned citizens took to the podium to be heard with 15 opponents (several others chose not to speak after their viewpoints were already expressed) and five proponents speaking in the three-hour gathering. Most who were against the median said that U-turns were more dangerous than the current left turns on the busy five-lane road, that businesses would be impacted and that it simply isn’t needed.

Terry Rosinger, who runs two businesses in the heart of Clemmons, said: “It’s going to create a huge mess, be a huge inconvenience and cut business in half or more to all retail establishments. It’s not needed, and everybody I talked to is against it. Basically, it’s a waste of money. “If you want to make it safer, put a Sheriff’s car out in front of Pete’s Restaurant where everybody can see it. It will slow people down and save a lot of money, The day they start construction on a median is the day I close both of my businesses and move out of Clemmons and somewhere else.”

Longtime attorney Les Frye said that the problem with U-turns is obvious. “I don’t think we have people going out joyriding making left-hand turns along Lewisville-Clemmons Road,” he said. “They’re trying to get to a specific business. If it’s your intent to run businesses off as a solution to the problem, I think you’ve made a wise decision. “I don’t understand why we can’t have referendum at next council election and let the people speak. I think the majority of people are opposed to it. We were faced with this a few years back (when a vote for a bond failed by a large margin) and took the only course of action we could by electing some people to the council that shared our views.”

To take care of the increasing volume on the road, Gordon Hendrix, a developer and businessman, said that back streets would help take some of the traffic off Lewisville-Clemmons Road.

Resident Elizabeth Seymour said that the biggest problem is that “the worst drivers in the country are in Clemmons” and that they’re doing all kinds of things other than paying attention when they’re behind the wheel.

Nat Swanson has dealt with this problem before as a former mayor and said the accident rate on the five-lane highway was less than the state average and that injuries were minor. “Ever since lived here, I’ve heard how bad Lewisville-Clemmons Road is,” he said. “The people who are really disturbed about this evidently have never been to Charlotte or Raleigh or, for that matter, Hanes Mall Boulevard.” Swanson said that he hoped the upcoming Idols Road Extension will alleviate traffic on Lewisville-Clemmons Road and provide a different route to U.S. 158 into Winston-Salem. “Actually, 158 is becoming more of a problem than Lewisville-Clemmons Road,” Swanson said. He said that when he was mayor and talking with the Davie County Commissioners, they wanted a bridge across the Yadkin River from Idols Road that could extend to N.C. 801 and serve as another alternate route. “You can build a lot of bridges for $21 million,” said Swanson, who added that money won’t come close to fixing the road, citing studies that gave estimates of $65 million, $90 million and $120 million for projects that included right-of-way acquisition and constructing parallel roads. “I’d like to tell DOT that we want the $21 million to put it in the bank for a while until you can do a project that will solve the problem,” he said.

Those in favor of the median said safety of negotiating the busy stretch was the top priority. “Safety along Lewisville-Clemmons Road is of paramount importance,” said Larry Wise, who was part of an ad-hoc committee in 1999 to study the road. “We sent out 1,710 surveys and got back 809. We sent out 150 business surveys, got back 47 and had to follow up with businesses numerous times to get all the input we could. “Lewisville-Clemmons Road is a nightmare. I don’t think it’s going to hurt businesses. I don’t think that the council should be intimidated.”

Resident Rhonda Schmidt said that she looked forward to a median to avoid “standoffs in the suicide lanes.” Ed Brewer, a former mayor, commended the current council for approving the resolution to request funding from the NCDOT for the median. “It’s long overdue,” he said. “It should have been done years ago. I understand the effort to construct parallel roads, and that would be great and certainly help, but it won’t fix the problem.”

Al Harbury, a former councilman, said that the median will at least smooth the traffic by preventing drivers from cutting across opposing traffic anywhere they want to. “Delaying again will just extend the problem farther into the future,” he said.

After the wave of citizen comments, the council took its turn, starting with councilman Mike Combest who stated this has long been part of the Comprehensive Plan and Transportation Plan and that this has been studied many times with opportunities for public input. “This just didn’t fall out of the sky,” said Combest, who pointed out this won’t be one long median from I-40 to U.S. 158 but a compilation of small segments of medians that need to be part of an access management solution including parallel roads as part of the Overlay District. “A solid median would kill business.”

Combest put together 62 slides showing all kinds of statistics about crashes going down and how business profits will actually go up, which drew jeers from the crowd. Nelson, who has been vocal in his opposition to the median along with councilman Chris Wrights, then jumped in and said: “I know that you have a bunch of slides on research and studies and stuff like that, but I want to point out that for every study that you find that supports a median from a retail perspective, you can find a statistic from another report that says it’s fatal.”

Combest countered by saying that his research shows the greatest threat to businesses isn’t medians but increasing traffic volume and clogging up the roads if nothing is done. Nelson said that the Comprehensive Plan needs to be updated and that when it was approved, the intent was for it to be a guide, not actual policy. He added his concern for the small businesses along the strip, and said if this median goes in based on the proposal, 16 homes and 32 businesses would have to be moved.

“Once funded, it’s in their hands,” said Nelson, who suggested that the Village should look closer at the Overlay Plan and diverting traffic off the main road, and take two years to do a true study on this alternative instead of leaving it up to NCDOT. “You are saying that DOT has our best interest at heart. I’m saying I don’t think so.”

Combest said he is against paying for another study to get the same answer.

Councilwoman Mary Cameron said: “We’ve got more than a volume problem. We have a left-turn problem. A median without the parallel roads isn’t going to do any good. They work together. Nothing is ever going to fix Lewisville-Clemmons Road. It can be made to be better.”

Wrights has always been the lone councilman opposed to the median, pointing out in the 2009 feasibility study that this stretch of Lewisville-Clemmons Road was unsatisfactory and operated at an “F” level. “If you make it a four-lane road with a median down the middle, it’s going to operate at an unsatisfactory F level,” said Wrights, who added the northern part of the road on the other side of I-40 has gotten worse with the median added.

Councilman Lanny Farmer said: “If we don’t do anything, traffic is going to increase from 30,000 to 50,000 over the next however many years. At what point are we going to be motivated to say we have to do something on Lewisville-Clemmons Road to make it a safer, more convenient place to live.”

Mike Rogers, who is the council’s TAC representative, said that his understanding was that Clemmons will find out if funding is approved in January 2017 and then finalized, if given the OK, in June 2017.

• Agreed by consensus to have high-mast interchange lightning along I-40 from Harper Road to the Forsyth County line at the Yadkin River as part of the project to widen I-40 from Harper to N.C. 801 in Bermuda Run. The lighting system will be maintained by NCDOT.

• Approved a budget amendment to appropriate $110,000, which was agreed upon by the Village and Forsyth County, to build the infrastructure for the new library in Clemmons until the county reimburses the Village.

• Agreed by consensus to agree to a site plan amendment for the Clemmons Town Center development for the removal of the greenway connection through the wetlands.

• Heard from Village Manager Larry Kirby that some 25 calls were reported to the Sheriff’s Office Sunday night and Monday morning regarding car break-ins in the North Lakeshore and Fair Oaks Drive area. “Please know they have not found an automobile that was stolen from that was locked,” Kirby said. “Please lock your cars this time of year.”

• Heard from Robin Dean in the public comments portion of the meeting, requesting that a public hearing wasn’t needed and that a public forum should be held for the council and Clemmons residents to make sure future generations have improved traffic flow and safety; Kay Stocking offered that the local chamber should designate a representative to attend each council meeting to ensure that local businesses stay informed on the actions of the council along with information shared; and Bill Lawry said that adding a median was a wrong-headed idea to remove what’s working on Lewisville-Clemmons Road and going to dangerous U-turns that “will kill a vibrant Clemmons commercial district.”