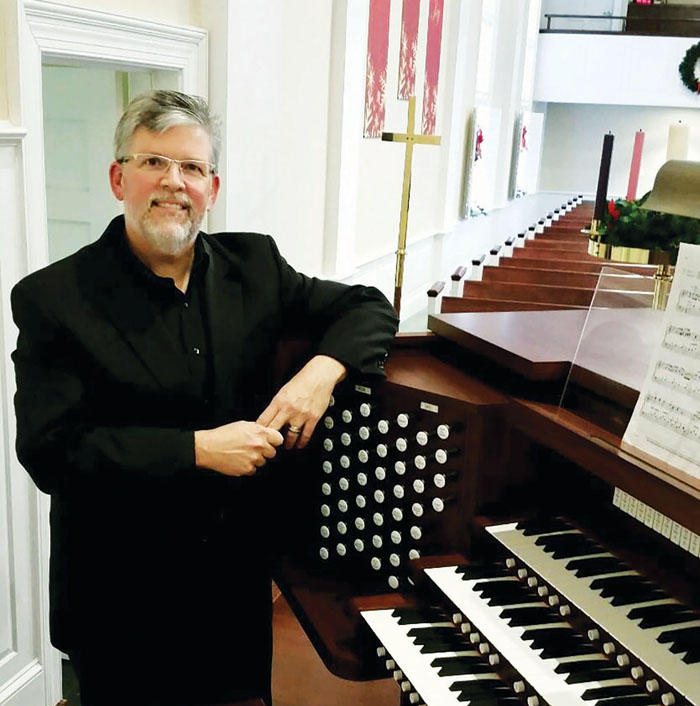 Lee Covington, organist for Clemmons United Methodist Church, is part of a musical family. His wife is church choir director, and their sons are accomplished musicians and singers.

Music has always been a boon for Lee Covington. Ever since he was a little boy growing up on a dairy farm outside of Mebane, music has been a source of comfort to Lee. “You can really enjoy music as a solo performer, but you can also experience and enjoy it with many other people. It is the opportunity for creative expression and, hopefully, brings joy to others,” says Lee.

It certainly brings joy to Lee and his wife, Carol. Carol is the Director of Music and Worship Arts at Clemmons United Methodist Church. Carol takes the lead and Lee plays the piano and organ at church. For Lee, volunteering his musical talents at church is nothing new. He has been involved with church music one way or another ever since he was a boy.

“My dad played piano and organ. He was also the volunteer choir director. So I started singing in church when I was little.” Lee was just five-years-old when he had his first solo. In junior high and high school, he joined the band. In fact, he was drum major for three years in high school.

In college, Lee continued his passion at Elon University. While he majored in finance, Lee was very involved in groups and ensembles both vocally and instrumentally. Elon allowed access to what would normally be extremely expensive lessons. They were private lessons with a professor at no additional cost. Lee took advantage. “So I took private lessons in voice, sax, and organ. I learned organ skills while at Elon because I had taken piano as a kid.”

Elon was also where he met his wife, Carol. The two musically-inclined lovebirds soon married and now have three boys. Two of the three have attended North Carolina School of the Arts.

Lee brought music into his boys’ lives, but he has also brought it into his professional life. After Lee graduated with a major in finance, he worked in the banking industry. It wasn’t long before Lee decided to change routes. “It just didn’t seem like a good match. I went to work for a nonprofit who provided assistance to adults with disabilities.” Lee has been working for non profits ever since. He will soon become president and CEO for Senior Services, replacing Richard Gottlieb. At Senior Services, Lee can piece together his passion for music into the lives of senior citizens.

“Our mission is to help keep frail senior services living at home as along as possible,” Lee notes. “Often times, seniors living at home are isolated and lonely. The arts are a way to bring joy into their life.” At the Williams Adult Day Center, music is helping some senior citizens with their memories with a program called, Music and Memory.

Lee has helped this program grow and expand. “Each person has a customized play list that was meaningful from their early days on an iPod. Those with dementia — the music taps into their brain and brings them into a different time in their life. Often times, it calms them down if they are upset.” Some of the more popular requests are gospel tunes, Elvis Presley, and the Beatles.

Lee was also instrumental in partnering Kindermusik with Senior Services. Kindermusik provides music classes for young children and the stay-at-home provider. “We are going to start a class where parents who have very young children can come in and have a music and movement class with seniors as well. It would be an inter-generational class for seniors. We are also exploring the idea of doing a music activity in people’s homes. We would match up moms and dads, stay-at-home parents and their child with a senior. They would then have music and activity in their home.”

Music was instilled in Lee as a boy, but so was the spirit of giving back. “My parents were very involved in community. They always took things to people’s homes when someone died. Making a difference in the lives of others was instilled in me from an early age.” While our neighbor may have learned at an early age to help others, it would seem he has spent a life time lending his skills to people of all ages.