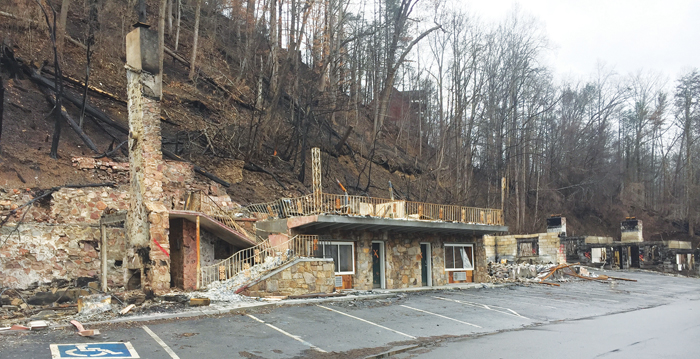 Shown above are the ruins of a small motel burned in Gatlinburg’s fire a month ago. — one of 53 commercial structures destroyed just a few blocks off the main drag.

GATLINBURG, Tenn. — This town’s familiar two-mile traffic jam was back on New Year’s Day as tourists made the most of a long holiday weekend. Restaurants and stores were busy. I didn’t come here, however, for the long strip of shops, hotels, wedding chapels and attractions. I wanted to see the fire damage.

Now a month after a monster forest fire almost engulfed this town, we drove up Sunday to see the damage.

On the back roads, houses had burned to the foundations. Only chimneys were left standing. The fire swept to the literal edges of this town only a couple blocks from the main drag. Some back-row motels and small stores burned.

During summer vacation, our car navigation tool sent us wandering up and down a narrow mountain residential street with elegant homes overlooking town. On Sunday, that same street was almost barren — maybe three houses remained mysteriously untouched while dozens of others were reduced to ashes.

I had hiked the steep and beautiful Chimney Tops trail among towering yellow poplars and a carpet of wildflowers last summer. That was where the fire started Nov. 26 — apparently set by two juveniles who have been charged with arson. Many other potential charges, including murder, are pending. From U.S. 441, we saw Chimney Tops again, this time with a giant black scar down one side where the fire spread. The trail is closed.

We drove through the Great Smoky Mountains National Park to witness a charred forest floor. The leaves and underbrush were gone down to the bare earth on the Gatlinburg side. Trees were charred to about six feet high. Some will live. Many of the worst burned are dead. The park service has been busy with chainsaws during the past month clearing the highway and protecting motorists from trees with a potential for falling.

Last summer we drove out Cherokee Orchard Road, about two miles, into the Great Smokies to the Trillium Gap trail head. On Sunday, that entire drive was amid the ruins of motels, vacation homes, campgrounds and finally the burned forest.

Inside the park, we saw a mountainside that had burned high in patches as hurricane-force winds whipped the cinders from peak to peak, burning 10 acres here and 10 acres there as the fire skipped along with the winds.

The fire was set on a remote, extremely steep mountainside that made fighting it nearly impossible. Such fires commonly burn themselves out. The Smokies are usually very wet with average yearly rainfalls as high as 85 inches on Clingmans Dome. But not this summer. A drought had left the forest a tinderbox. When the winds came, they blew furiously to Gatlinburg about 10 miles away. For a couple days, the town was on the edge of hell, and evidence of the fire can be seen perilously close on all four sides of town.

People flock here to see the wildflowers in spring and fish for trout. They come in summer for vacations. They come in fall for the beautiful leaves. Some, like me, are coming this winter to see the fire damage.

The yellow security tapes around the fire scenes have drooped. The curious can stop their cars at the various ruins and gawk. All those pictures of ruined stores and motels broadcast a month ago were easily accessible on Sunday. A spray painted “X” marks the shells of buildings, branded by fire fighters as they checked for victims.

The clean up has just begun. Dumpsters and front-end loaders were on some sites. A few “For Sale” signs were posted on the now-vacant residential sites. For many of those sites, there is little but ashes to haul away. Everything burned.

But this town will rebuild. It’s on the edge of Eden.

A gentle mist was falling during much of our visit, and Gatlinburg had regained its bustle. People are flocking back to spend money and have a good time. Restaurant marquee signs thanked fire fighters and urged the town to stay strong.

I saw the ashes. I saw the shells of the lost stores and burned out cars. But I also saw a faint green tint to the forest floor in sunny areas indicating that life is reawakening from the ashes.

My treasured Smokies will bloom again in spring. The wildflowers will return. The black scars on some of the mountainsides, however, will long be a visible reminder of the fire.

As serene as things seemed on Sunday, I had to imagine the panic and terror as residents and tourists fled for their lives down tiny, winding mountain roads to escape the advancing blaze and choking smoke. That so few died seems a miracle. Considering the New Year’s Day traffic jam, how the people got out ahead of the blaze is remarkable.