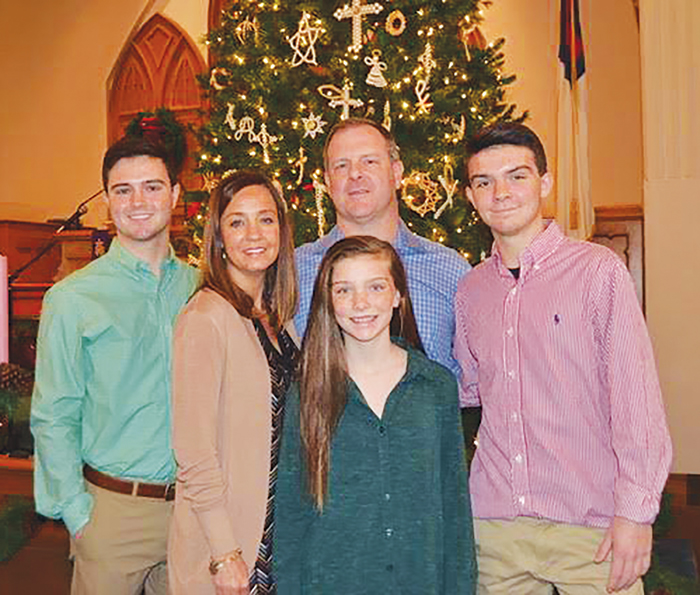 Kristen Esposito first made Clemmons her home when it was incorporated as a municipality in the late 1980s. Her father’s profession as a city manager had them traveling the state of North Carolina throughout most of her childhood. They settled in Clemmons when Kristen was a sophomore in high school. New to West Forsyth High School, Kristen was grateful for the amazing group of girls that would embrace her and share a lifetime of friendship. “If it had not been for that group of girls, I wouldn’t have loved it quite so much,” smiles Kristen. “I think what we had and still have is rare. I appreciated the whole atmosphere at West. Mr. Peoples, the principal then, the teachers, it was lots of fun.” Kristen, a sports enthusiast also enjoyed attending the sporting events.

After making many memories that Kristen would hold dear at West Forsyth, she began her next chapter at East Carolina University (ECU) in Greenville. “I am a science girl,” jokes Kristen. She believed her skillsets would be best served in physical therapy. “Back then, you either went to the University of North Carolina at Chapel Hill (UNC) or ECU for physical therapy.” Kristen had also reconnected with her future husband, Mike Esposito, a West Forsyth alumnus right before attending ECU. “A group of our friends went to the Frank Spencer Holiday Classic basketball tournament and ended up going bowling afterwards. We had been friends before he went to UNC and just started talking. When you meet the right person, you just know. He was very active at UNC with his activities and I was too at ECU. We were still very independent people which made it work.”

Kristen ended up putting her focus in the science and nutrition route instead of physical therapy. Outside of her academic pursuits, Kristen joined a sorority and made new friends that she also cherishes. “If you look at my phone, there is always a thread with my West girls and my ECU girls,” notes Kristen. “We all have busy lives but make time for each other.”

After college, Kristen began working at the Moses H. Cone Memorial Hospital in cardiac rehabilitation. She spent her days helping people who had suffered a heart attack, heart failure, angioplasty, or heart surgery improve their heart’s future. When she wasn’t helping her patients, she was visiting Mike in Richmond, Virginia who was getting his masters in public health. At an ECU homecoming game, Mike proposed to Kristen. They were married in 1995.

Kristen and Mike moved a lot. “We joke that each of our three children were born in three different states because of Mike’s profession,” remembers Kristen. Kristen realized she wanted to stay home with her kids while they were young. “After traveling to different states for 12 years, and three children later, we were able to come home to Clemmons.”

Coming back home for Mike and Kristen meant their children would be making new memories in many of the same familiar places. Ben, their oldest, is a senior at West. “It was always really fun to go to football games in high school. It’s even cooler when your kid is playing,” appreciates Kristen. “Ben participates in West’s finance academy. It’s really neat how much he is able to focus on his interest because of this program.” It allows Ben to have real world experience too. He recently did an internship at the Kensington Financial Group and learned the inner workings of the financial world. Their son, Jay is also a freshman at West. And their youngest daughter, Sarah will be there in just a couple of years. “West Forsyth is such a well rounded atmosphere,” Kristen marvels. “The teachers, the new principal, the staff are amazing. They work hard to make sure the kids are prepared and have many valuable experiences. “ Kristen is also very happy to give back to the school that has given so much to her family. She is secretary of the West Forsyth booster club and on the hospitality committee.

Kristen realized when Sarah was in the second grade that she would enjoy re-establishing herself in a professional setting. She began working at Hip Chics Boutique and Gifts in Clemmons part time. “I was a pretty big shopper of the store,” jokes Kristen. “It made sense to work there 2 days a week.” After a year at Hip Chics, the business had really taken off, and the self-professed ‘science girl’ was approached to become the manager to focus on the growth. “I really enjoyed the team of Christian ladies that worked there. And it also allowed me to be there for my kids when they came home from school. That was important to me,” mentions Kristen.

Also, important to Kristen is having a sense of community at church. Kristen and her family are part of the Clemmons United Methodist Church. “I wanted my kids to go to church with people they knew and were friends with,” says Kristen. “It’s a great community of people there.” Having moved so much as a child and as a young adult, Kristen does not take her community for granted. “It’s fantastic where we live. My kids’ friends are right down the street. I love that they have that as part of their childhood.”

Our neighbor has always appreciated her friendships that strengthened her sense of community. As the old Irish proverb goes, “A good friend is like a four leaf clover; hard to find and lucky to have.”